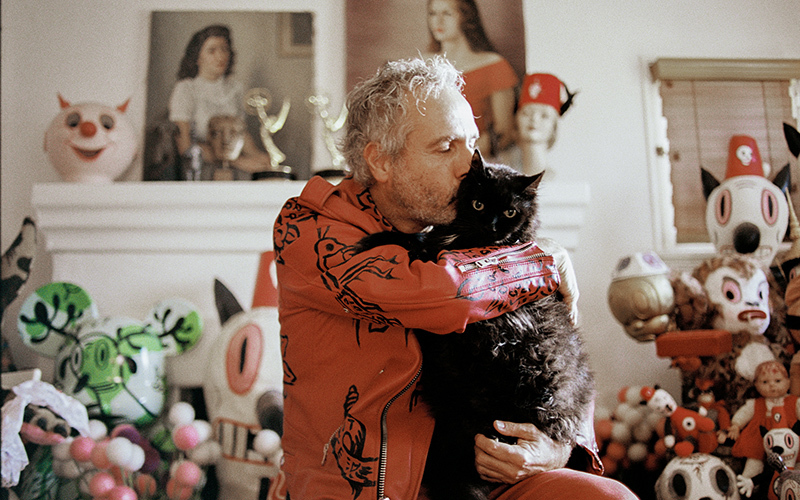 Gary Baseman at home with Blackie the Cat. Photo by Gabriella Achadinha.

The artist explains how he channels love and loss in his art and life.

Gary Baseman is a prolific artist known for his symbolic worlds and stylized, signature characters. Based in Los Angeles, America’s reigning nexus of low-brow culture, Gary has become a kind of patron saint of pop surrealism — the art movement known for its luscious figuration and uncanny depictions of pleasure, pain, dreams, nightmares, and everything in between.

As an illustrator, Gary’s work has appeared on the cover of The New Yorker, in the pages of Rolling Stone Magazine, and in the animated TV show he created — Teacher’s Pet — which won him several Emmys.

Growing up near Hollywood, Gary’s family history presents a stark contrast to the shiny — many would say “superficial” —  veneer of Tinseltown. Gary’s Jewish parents settled in Los Angles after escaping the horrors of the Holocaust. They fled their Polish village (now part of Ukraine) prior to its desecration — and the mass murders of their friends and neighbors — at the hands of the Nazis.

The City of Angels, with its glamour and decadence, represents the polar opposite of what Gary’s family experienced in their homeland. This tension — a seemingly impossible reconciliation — forms the basis for much of Gary’s art. As heavy as that sounds, however, Gary’s work is still full of humor ... and tenderness.

“I draw a lot during meals and during my travels as a way to document my existence,” Gary says. “And, I’ve come to believe that if I create something of value, then I have value. As an artist, if I can create something that's unique, that’s special — that I know could not have existed if it wasn't for me existing — then I have a kind of purpose on earth.”

In addition to paintings, installations, movies, fashion collaborations, and toy designs, Gary is currently working on his 153rd sketchbook. These sketchbooks document Gary’s daily life and society at large, with each book containing a universe of imagery that combines real events (presidential elections, protests, the pandemic, etc.) with a cast of playful and mischievous characters.

Every drawing is double-sided, “so it's not like you can just rip a page out,” says Gary. “For me, that's why these sketchbooks exist as one piece of art.” 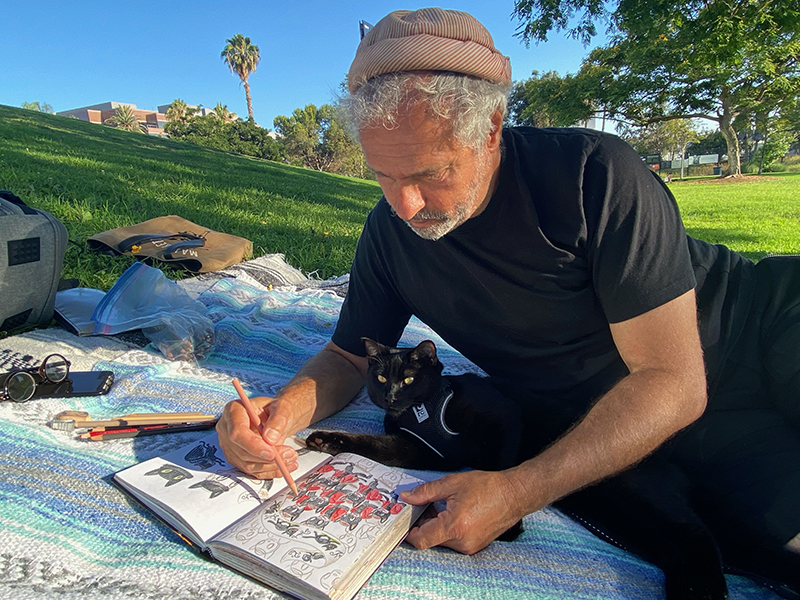 Gary and Bosko the Cat at the La Brea Tar Pits in Los Angeles.

On memories and his long-time muse, Blackie the Cat

“Normally I'm traveling around the world and I'm filling up the sketchbook through my travels and through the places I've been,” Gary explains. “But, now I’ve been at home during the pandemic, so I’ve been doing some drawings based on what's going on in the world.”

“I have a picture of my dad in this sketchbook,” he continues, “because after someone's gone, this is a way of keeping them alive. Some drawings show the idea of all the deaths from COVID — so I'm documenting that. And, also my love for Blackie.”

For those familiar with Gary’s work, Blackie is a well-known figure in the world of Baseman. Inspired by Gary’s black cat of the same name, Blackie has become a metaphor for an entire spectrum of emotions and experiences. Occasionally, he appears as a kind of self-portrait of the artist, at other times, he’s a guru and an oracle of wisdom.

“Blackie was my everything,” Gary says. “He was my best friend for more than 14 years.”

Many people lost someone they loved in the past year, including Gary. When Blackie passed away in 2020, Gary was grief-stricken. He channeled those feelings into his art, using his sketchbooks as a way of commemorating his muse, his companion, his “everything.” Even before Blackie passed on, however, he was a recurring subject in much of Gary’s work for many years.

“I'm using his talents in my own art,” Gary explains. “For example, I created the Purr Room, which was an art installation that included a sound bath composed of Blackie’s purr, so people could lay down inside the installation and listen — it was healing and transformative.”

“I’m trying to understand his teachings by playing around with the idea of the Gospel of Blackie the Cat,” Gary says.

The Purr Room was exhibited at The Other Art Fair — in both Los Angeles in 2018 and London in 2019 — as an immersive installation, right before the world changed and widespread lockdown ensued. Even then, Gary saw Blackie as a source of healing.

It's not the destination, it's the journey

During Blackie’s illness, he began taking walks around Gary’s block in Los Angeles, which Gary documented — more than 100 hours in total — and shared on social media. These walks were timely — they channeled (and inspired) Gary’s own method for coping with the isolation and restlessness wrought by the pandemic.

When reflecting on the early days of lockdown, Gary recalls, “It was a time where you didn't see anybody, couldn’t travel, and were basically on your own. But they said you could exercise, so I would allow myself to go out and walk. And I did so in a very extreme way.” On average, Gary still walks about eight or nine miles every day. 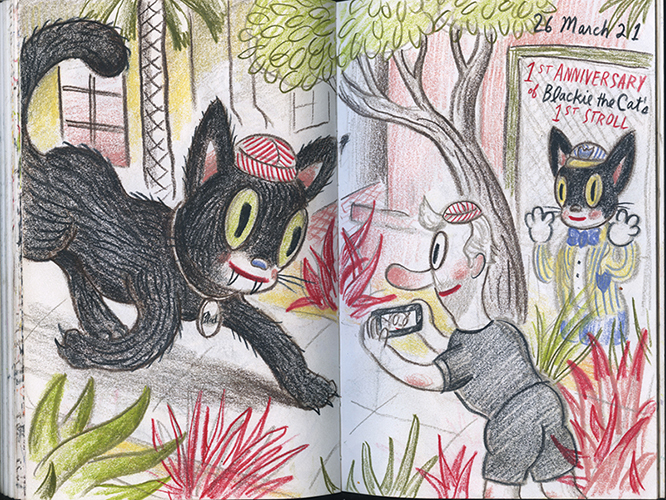 “I was finding ways, as an artist or as myself, to understand what we're doing, or what we're feeling, just this notion of how to survive during the pandemic together,” he explains.

“So, I wasn’t really worrying about where I was going, the destination, or how many miles I would walk,” he continues, “but focusing more on the actual sense of movement itself, of feeling my legs moving, feeling the wind, the air, watching the trees, the breeze, and everything around me … and just taking all that in. Just living in the moment.”

These walks ultimately led to more sketchbook drawings, but the walks of Blackie the Cat became a vital source of inspiration for Gary, and he further documented those in a dedicated sketchbook.

In his words, “Through Blackie the Cat’s strolls, he taught me how to concentrate on my own walk and hikes. He also taught me the most important lesson: ‘Life is about the journey and not the destination.'”

This special sketchbook became both a way to honor Blackie’s memory and a tool to help Gary process his grief. The ritualized practice of daily drawings that commemorated Blackie and their friendship — before and after his passing — became a therapeutic exercise.

“You have to learn how to just allow yourself to be vulnerable and to mourn,” Gary reflects. “A lot of my art within the last few years is all about the mourning process.” 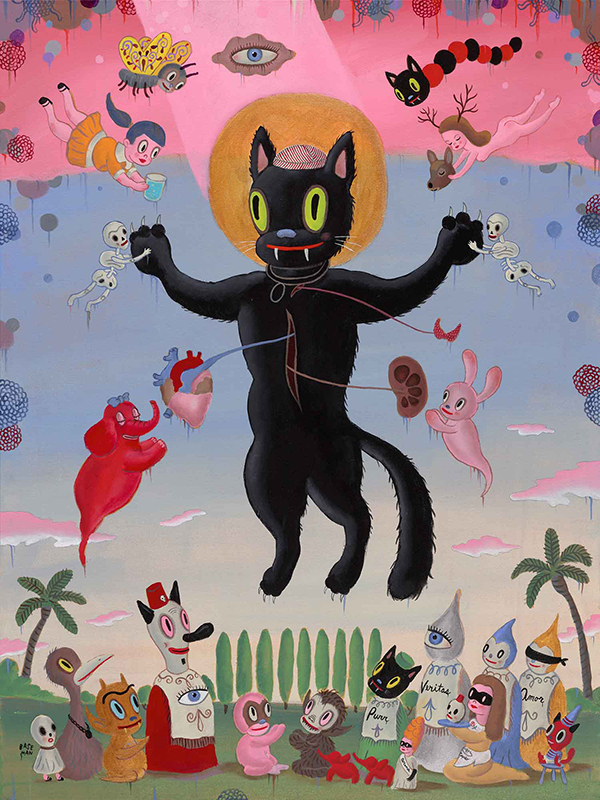 Gary Baseman, The Acension of Blackie the Cat.

On creating legacies through art

Gary’s work incorporates symbols and characters that represent his loved ones. After drawing his beloved Blackie the Cat and using the artistic process as a way to memorialize their life together, Gary created the painting, The Ascension of Blackie (pictured above). The painting was inspired by a dream Gary had the night that Blackie died and depicts Blackie’s transition from this world to the next.

Gary works with themes, enduring concepts that have universal significance, such as romantic desire, guilt, and grief. “I may do 15 drawings to understand a theme,” he explains. “The goal of each painting, and every exhibition, is that I have a theme I want to develop and convey that theme through a particular body of work.”

Recently, Gary has been exploring his own family history — going through his childhood home and rediscovering his earliest drawings and other works of art. He’s long been working on a documentary about his ancestral roots in Eastern Europe — a place his parents warned him never to visit — a process that is both painful and redemptive.

“There’s an obligation to remember those stories now, and figure out how to learn from them. As artists, what is our own legacy?” he asks. “You know, for me, as someone who's not very religious (I hope I'm somewhat spiritual), I’m always wondering — do we have a soul that doesn't move on when we're gone?”

Through the act of daily documentation, via his sketchbooks, and the consequential paintings, installations, and exhibitions born from each theme, Gary uses his creative practice to ensure that certain legacies endure.

“In many ways, our legacy is what we create, and what people remember from us, and that's the soul — our spirit — and how we can live on through other people's memories,” he explains.

“So that's what I'm trying to do. I’m trying to understand — through these different exhibitions and themes — how do we live a more fulfilling life and learn from those that we love and that have touched us?”

Storytelling is an ancient method of passing down wisdom, morals and memories, but storytelling takes many forms. Gary’s work explores the unconscious, the ego, and the id, but does so in a way that is relatable to an entire spectrum of individuals, regardless of age.

Gary is also currently working on an exhibition dedicated to Blackie the Cat. Combining his drawings, paintings, installations, animation and video footage, the exhibition will be an homage to the most important being in his adult life. As with his walks, the process of putting this exhibition together is more about the journey, less about the destination.

Recently, Gary adopted a new black cat and named him Bosko. True to form, Bosko is now a regular in Gary’s sketchbook and in his social media posts, accompanying him on walks and causing mischief wherever he goes.

Bosko has not replaced Blackie — they both make appearances in Gary’s daily drawings. But he does offer Gary companionship — and inspiration — in Blackie’s corporeal absence. Even if grief feels completely overwhelming at times, life does, indeed, go on. It’s an important lesson, especially as society reemerges from the pandemic and attempts to move forward, with hope, grief, and a sense of purpose.

“If I can create something that is real, that is heartfelt, that is true, and then offer that to the world, then I've done something of value,” Gary reiterates. “If I can inspire others to be able to go on and create, if I can help them understand our existence and why we are and what we can be, then I’m on the right path.”

To learn more about Gary Baseman, visit his website. You can also catch him in the recent Moby documentary Moby Doc, alongside cameos from David Lynch and David Bowie.

Artists like Gary Baseman use Artwork Archive to manage their studios and get organized. Try it free for 30 days. 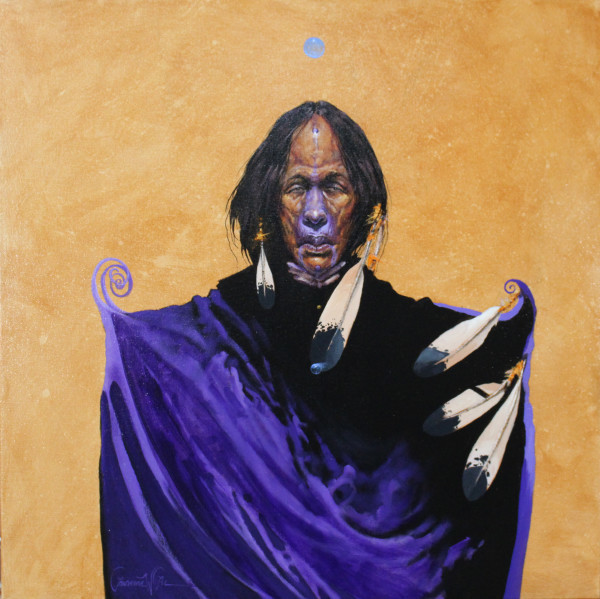 Lawrence W. Lee has sold $20,000+ worth of art via his Public Page on Artwork Archive and you can too. Find out how he does it. 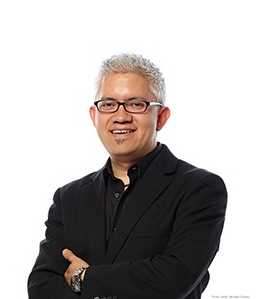 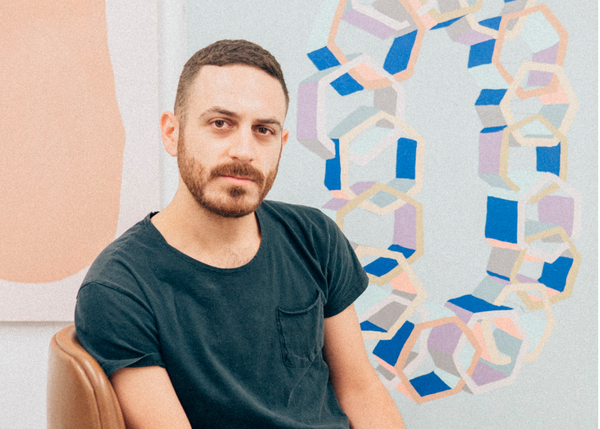 Medansky has spent the last few years not only skyrocketing to national attention but also been challenging both his and other's views of contemporary ceramics. 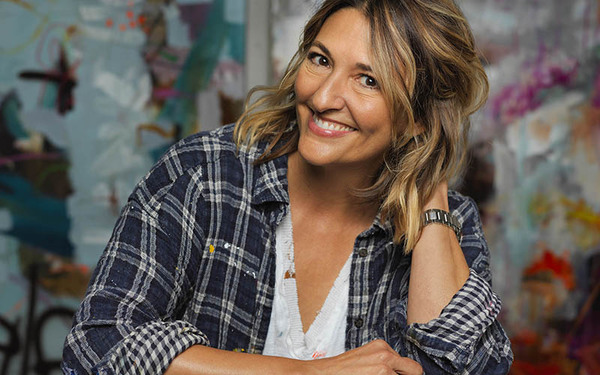 You Don't Need to Sacrifice Creativity for Business: An Interview With Jodie King

Artist Jodie King mentors artists who want to monetize their art about approaching their business and finding their most authentic voice.