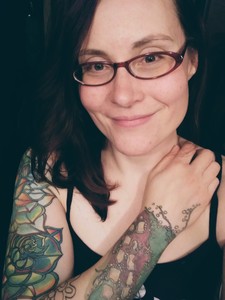 Laura Noel is a Coastal artist and musician, currently living and working in Bandon, OR. She grew up in the rainy, verdant lands of the Pacific Northwest, where she credits the poor weather and seasonal darkness to developing a strong sense of creativity and imagination. An undeniable influence from her youth spent in Washington State is evident in her work, as many of her paintings favor rich earth tones, moss-like forms, and evoke a feeling of forests. Laura migrated to California in the early 2000’s to attend the Academy of Art University in San Francisco, where she earned a BFA with an emphasis in Animation. She cultivated her craft and built her art career in California until the fall of 2020, when she relocated to the Southern Oregon Coast to start the next chapter of her life and artistic development.

Laura is a passionate and prolific painter. Her primary medium is acrylic paint and her style could best be described as “nature-inspired abstract.” She often creates work in series or diptychs and triptychs. Laura has created hundreds of paintings in her artistic career. She has also been recognized for her talent through several high-profile public art projects. In 2014 she was selected to participate in the Vallejo Downtown Window Art Project. The goal of this yearly installation is to fill downtown Vallejo’s empty storefronts with art to bring more life and culture to the downtown and encourage new businesses to move in.

When not painting, Laura can often be found playing guitar, exploring nature, or driving around in her one-of-a-kind customized Toyota Corolla art car, “The EcheVariAble”. 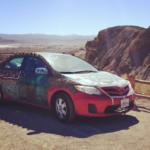 When not painting, Laura can often be found playing guitar, exploring nature, or driving around in her one of a kind customized Toyota Corolla art car, “The EcheVariAble”.