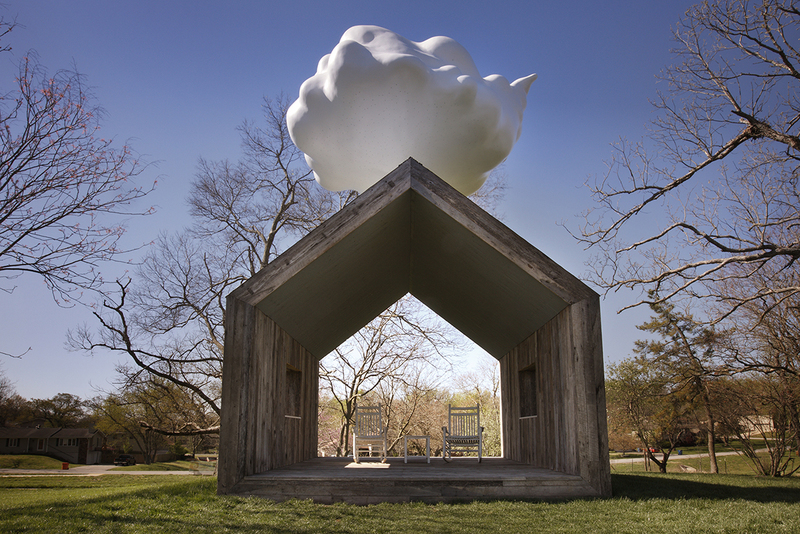 A bottomless swirling pool of water, an iceberg peeking out from a city channel, psychedelic flowers glowing in the night ...

These were just a few of the surprising and expressive public art installations of 2017.

Last year also had its share of celebrations. Chicago’s Mayor designated 2017 as the “Year of Public Art” and invested $1.5 million in artist-led community projects. The Public Art Fund, one of the world’s leading public art organizations, celebrated its 40th anniversary and San Francisco curated installations in celebration of its 50th anniversary of the Summer of Love (1967).

To celebrate the “Year of Public Art,” we put together a list of some of the most jaw-dropping, engaging public art installations of 2017. Cheers to you, public art! 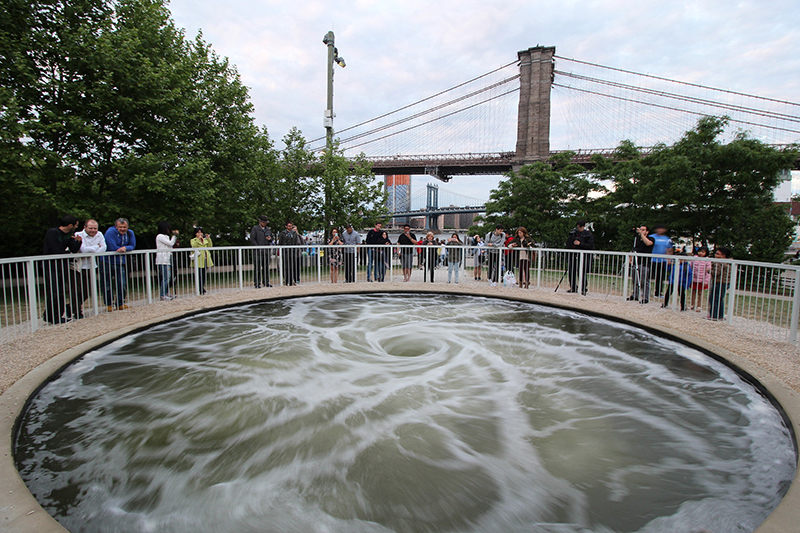 One of the standout works of Public Art Fund’s anniversary year was Anish Kapoor’s Descension. How can you not love a mesmerizing vortex of water that defies science and common sense?

Kapoor’s longtime fascination with the sculptural potential of water culminates in this 26-foot-diameter liquid mass. The swirling water that seems to plunge into the depths of the earth recalls the sculptor’s words about the role of an artist: “Artists don't make objects. Artists make mythologies.”

Descension creates its own world. It stimulates the imagination and leaves you with a powerful physical and emotional impression.

Monuments were a hot topic in 2017. While the country debated the presence of Confederate monuments, Philadelphia hosted its own conversation about social change — and the markers of its people and Philadelphia's past.

Monument Lab, a public art and history project co-produced by Mural Art Philadelphia and curators Paul Farber and Ken Lum, sought to answer an important question: “What is an appropriate monument for the current city of Philadelphia?”

Monument Lab brought together 20 artists from Philadelphia, and around the world, to address issues of race, gender, sexuality, class, and nationality with their monuments. They engaged the community in civic dialogue and solicited over 3500 monument proposals from the public.

A variety of mediums and processes were used in the construction of the monuments throughout the historical landscape of Philadelphia. A few of the monuments included Sharon Hayes’ cement sculpture, If They Should Ask, spotlighting the absence of women-dedicated monuments in the city. Marissa Williamson crafted an interactive video scavenger hunt, Sweet Chariot, where audiences uncovered a series of site-specific videos that revealed hidden moments depicting the African American struggle for freedom. 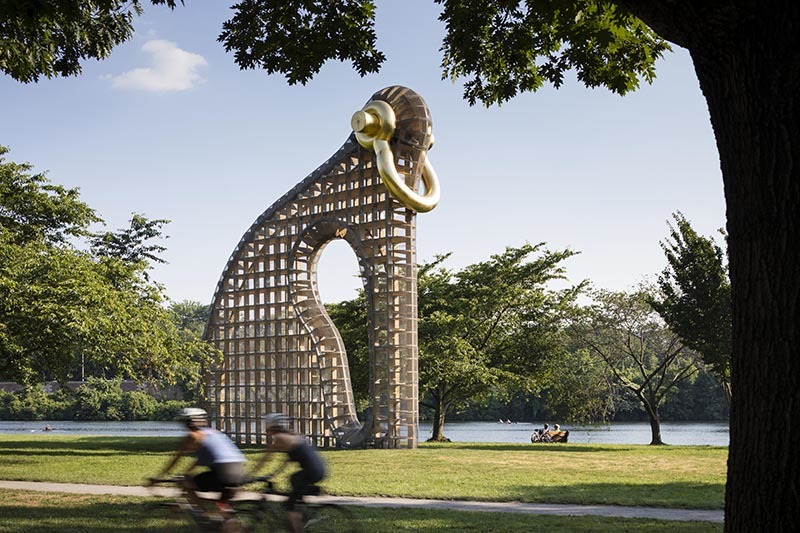 What is Big Bling? The sculpture elicited many interpretations: some saw an abstract form while others saw an animal — like an elephant with a long trunk reaching towards the ground. Puryear explained the ambiguity: “I tend not to tell people what they’re looking at when they’re in the presence of my work. I trust people’s eyes. I trust their imagination.”

Big Bling is a great example of how temporary work doesn't have to be a one-hit wonder, and that even the largest works can take root in a new home and bring delight to new audiences.

The Conservatory of Flowers was transformed in honor of the San Francisco’s “Summer of Love” 50th anniversary and its “Flower Child legacy". If you were to walk through Golden Gate Park at night, you’d be surprised to see bursting psychedelic colors and spinning flower mandalas. The facade of the Victorian greenhouse was the canvas for Illuminate, a nonprofit arts organization.

The light art installation was so popular that Illuminate returned to the Conservatory of Flowers with a new series of exquisite scenes inspired by the rare and tropical flowers within the building. “Photosynthesis: Love for All Seasons” is on view through Spring of 2018.

Marshall works with mediums beyond murals including collage, drawings, and even comic books. His work references African American culture and history including the Civil Rights era and the Black Power movement.

The mural was commissioned as part of Chicago’s "Year of Public Art" festival. One and a half million dollars was invested in artist-led community projects like the 50x50 Neighborhood Arts Project and the creation of a Public Art Youth Corps. 2017 also marked the 50th anniversary of two famous local work—The Picasso in Daley Plaza and The Wall of Respect mural. 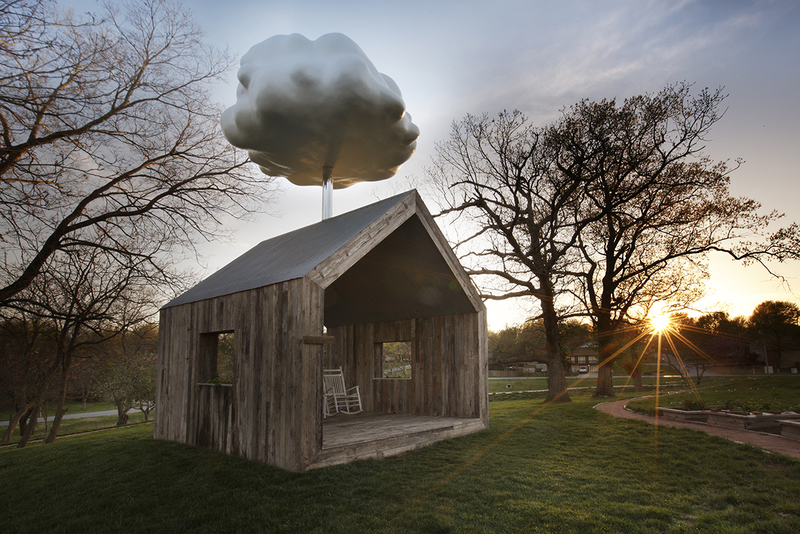 Matthew Mazzotta is known for his whimsical kinetic installations and Cloud House does not disappoint!

In Farmer’s Park, you will find a shed-like pavilion with a cloud perched overhead. Once you sit inside, the cloud rains onto the roof. You’ll be lulled into bucolic bliss as you listen to droplets hitting the tin roof and watch them flow from the walls onto plants growing in the window sills.

We’re giving away the magic trick: when a person sits on one of the two rocking chairs under the shelter, pressure sensors in the floor are activated. These trigger pumps to transport water from an underground storage tank up into the cloud, which releases the liquid through tiny holes to simulate rain. The roof has hidden gutters that collect real rainwater, which is funneled down through the walls to the tank so it gets constantly recycled.

Is it any surprise that such a technical delight came from an MIT grad?

With Buren’s signature stripes on the curved green and pink walls of a Swiss house, the duo explores the complicated relationship between art and the structures that frame it— a significant theme throughout Buren’s career.

And Macullo and Buren’s collaboration exhibits that public art does not only reside in city plazas or outside of famous international institutions. Thought-provoking and beautiful public art can be offered in even the most remote of places, like this Swiss valley.

Martin Creed is known for his humor and experimentation, and he lives up to those expectations with Work No. 2814. The work features a tree with plastic bags caught in its branches.

You read that right: plastic bags in a tree.

For the past 30 years, Creed has surprised viewers with ordinary materials and everyday situations that culminate into unexpected multimedia works. You can learn more about the artist’s perspective in this YouTube video. 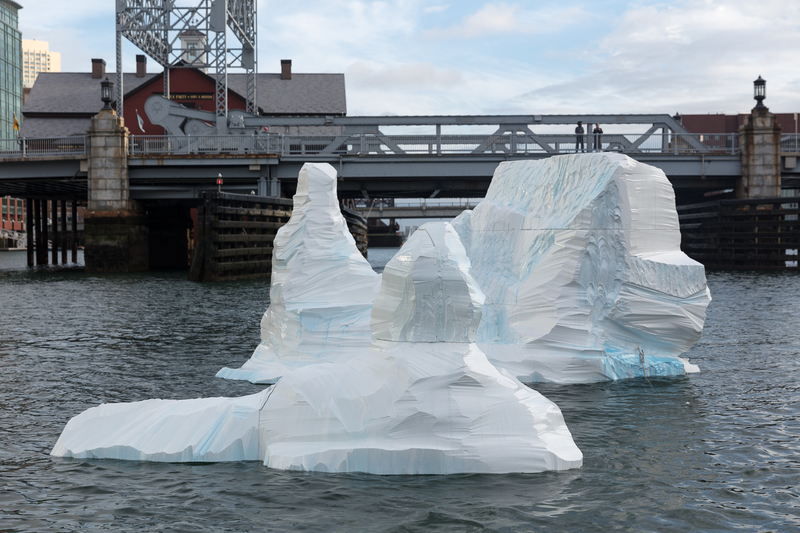 There’s an iceberg in the Boston channel?! Yup.

Boston-based artist Gianna Stewart created an iceberg replica to remind viewers of the effects on climate change on a local and global level.

According to Boston Magazine, Stewart was inspired by the real-life story of a trillion-ton iceberg the size of Delaware that snapped off the Larsen C Ice Shelf in Antarctica in July. It’s one of the biggest iceberg breaks recorded — spanning 2,550 square miles — and so massive it could, according to Climate Central “cover all 50 states in 4.6 inches of ice.”

Bostonians are getting used to baffling sites in the water, like last year’s flock of twenty-four orange mannequins floating in inner tubes — SOS (Safety Orange Swimmers) by Ann Hirsch.

Art has been used as a vehicle for self-expression and a tool for protest for centuries. In the fall of 2017, residents of Waterloo came together to challenge a government redevelopment project that will relocate at least 3,600 elderly, disabled and low-income residents.

The #WeLiveHere2017 Project's demonstration came in the form of light. Five hundred residents were given colored LED lights to hang in their windows to express how they felt about the state government’s plans. The lights made the residents of the towers more visible—giving a group that felt unheard and forgotten a platform to tell their story.

The #WeLiveHere2017 Project teaches us that we don’t need millions of dollars to make an impact. When a community is empowered, or enraged, or driven to make a difference, we can make a powerful statement with the most simple of technologies—like a household mood light.

We felt it best to end our post with the winner of this year’s 2017 International Award for Public Art: Brazilian artist Mundano’s Pimp My Carroça.

The project began in 2007 as a way to raise the visibility of trash collectors throughout São Paulo, Brazil. Now, Pimp My Carroça is a global, crowdfunded initiative. Over 700 carts in 42 cities have been painted with the help of street artists, volunteers, and donors. This project—much like Mundano's other interventions—focuses on social, political, and environmental challenges with a heavy dose of humor.

You can watch his TEDTalk about the project here.

Feeling nostalgic for 2016? Check out these 7 Must-See Public Art Installations of the Summer of 2016! 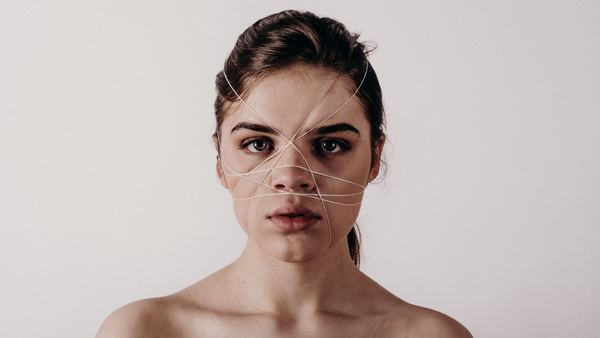 How to Overcome Creative Burnout

Don’t let burnout get the better of you. Use these 8 tips to refuel your creative fire. 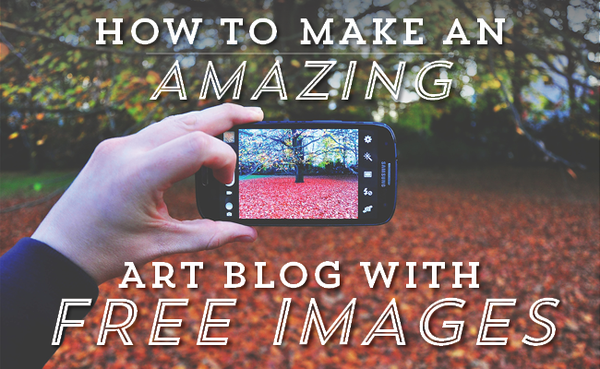 How to Make an Amazing Art Blog with Free Images

Want to improve your art blog with great photos, but think it’s too expensive? Here are some tips for giving your blog a free makeover. 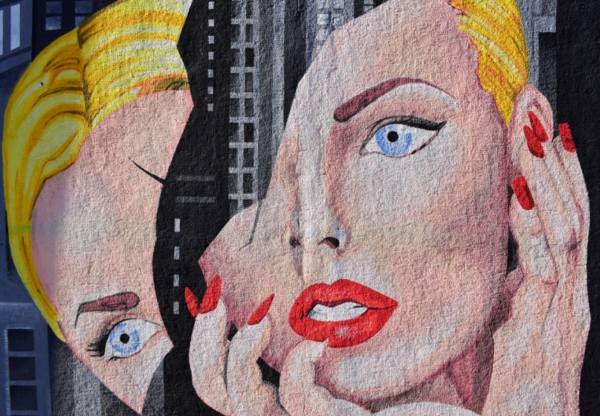 Someone Stole Your Art Images … Now What?

Copyright infringement of your artwork can leave you feeling helpless. Find out what you can do about it. 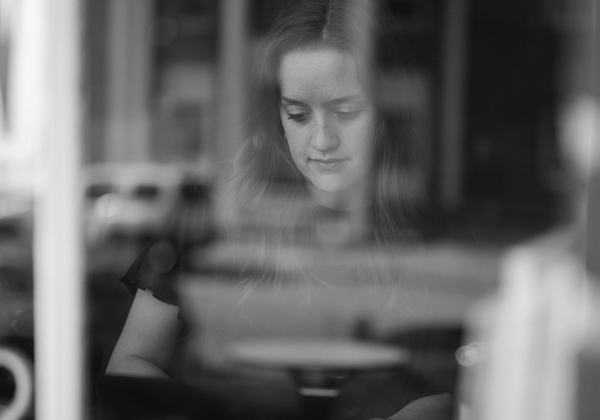 It’s time to check back in on your goals (or make some) and ensure they are setting you up for art career success.