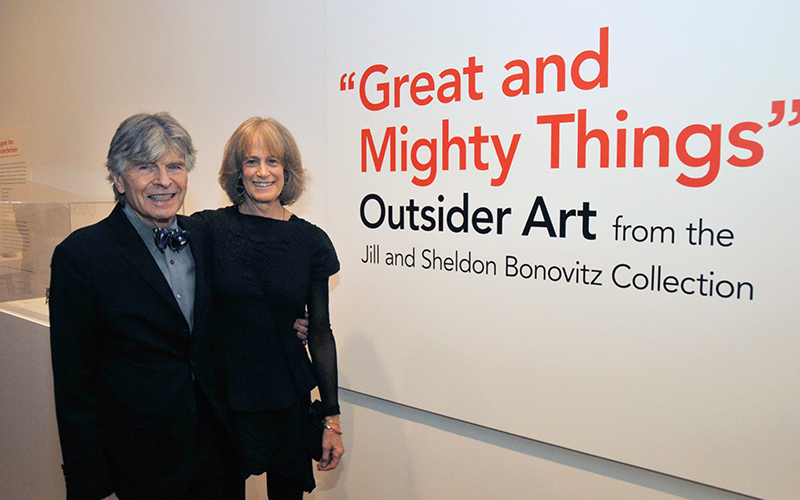 One collector couple reflects back on four decades of supporting outsider and self-taught artists.

The term “outsider artist” is somewhat redundant — many artists exist beyond the periphery of the traditional social order. Still, the category “outsider art” has been a convenient label to describe art created by those artists working outside of what many would consider society’s standard operating paradigm. These are generally artists who have received no formal training, do not operate professionally as artists, and have no connection to the mainstream art world.

Like most ontological definitions in art and philosophy, “the edges are blurred,” says Sheldon Bonovitz, who, together with his wife Jill — an extraordinary artist in her own right — has been building one of the world’s most important collections of outsider art since the 1980s.

Their formidable collection is well-known throughout the established art world. They’ve been profiled by The New York Times, and 200 works from their collection comprised the Philadelphia Museum of Art’s 2013 exhibition “Great and Mighty Things: Outsider Art From the Jill and Sheldon Bonovitz Collection.”

In her review of the exhibition, entitled “No More on the Outside Looking In,” New York Times art critic Roberta Smith hailed the show as serving to break down the walls of museums' reluctance to acknowledge the importance of outsider art in the institutional art world. The Bonovitz’s have promised a large portion of their collection to the Philadelphia Museum of Art, and they have become bellwether paragons for aspiring cultural patrons.

The term “outsider art” was first coined in 1972 by art critic Roger Cardinal. Initially, it was intended as a synonym for “art brut,” which artist Jean Dubuffet had defined in the 1940s as art outside the mainstream. According to the Tate, “For Dubuffet, art brut — which included graffiti and the work of the insane, prisoners, children, and primitive artists, was the raw expression of a vision or emotions, untrammeled by convention.” In the United States, the term has a much broader meaning, the most important factor being “self-taught.” 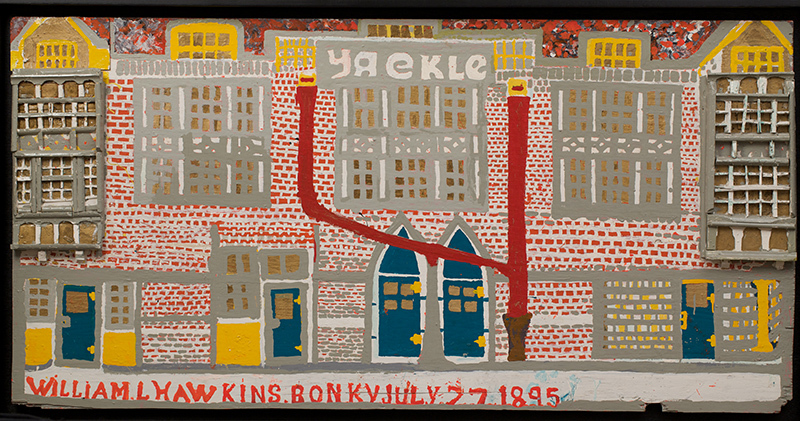 William Hawkins, Yaekle Building, 34 x 69.5 inches, paint on board. Courtesy of the Collection of Jill and Sheldon Bonovitz. Promised gift to the Philadelphia Museum of Art.

The Bonovitz Collection — The Early Years

The Bonovitz collection is unique in that Jill and Sheldon began focusing on outsider artists relatively early compared to other collectors. They trace their interest back to one specific exhibition, “Black Folk Art in America, 1930-1980,” which they saw at the Corcoran in Washington DC in 1982 (and which later traveled to the Brooklyn Museum of Art, among other institutions).

“Probably in the mid-80s, people began to refer to us as being collectors,” recalls Sheldon. “It was a very loosely-defined term then, because people weren't really collecting this art in any kind of numbers. But, I said to Jill at the time, ‘Why don't we just focus on this material; we love it, and let’s build something.’”

Jill’s own background provides some hints that she would ultimately gravitate towards outsider art. Born in Philadelphia, Jill’s mother owned a prestigious gallery that exposed her early on to artists from a variety of aesthetic movements, including Calder and Picasso — from whom her mother bought art directly, straight out of their studios — to the occasional outsider or self-taught artist.

When Jill enrolled in graduate school, however, her interest in self-taught art crystallized. “I was starting to get a master's degree in special education at Columbia Teachers College. I received a student-teacher placement at a really great private school in New York, working with children with special needs,” she says. “I was teaching reading, writing, and arithmetic — although there was a lot of art that the kids did. However, they would never take it home and their parents weren't interested. So I took it home and I framed some of it. And, we actually still have some of it.”

Jill’s own artwork is predominantly ceramic and sculpture-based and is in the permanent collections of renowned institutions worldwide, such as The Stedelijk Museum in Amsterdam; The Hermitage Museum in St. Petersburg, Russia; The Museum of Art and Design in New York City; and the Philadelphia Museum of Art, among many others. 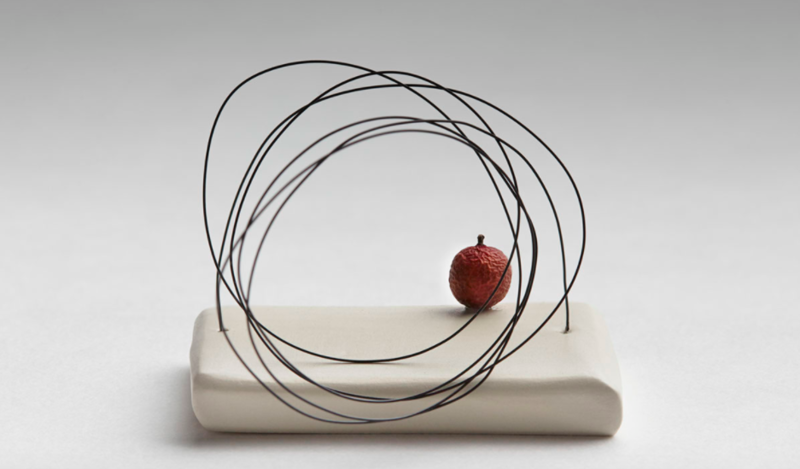 When speaking about her art, Jill cites the petroglyphs outside Santa Fe as an early source of inspiration — arguably the earliest examples of “self-taught” art that exist in North America. Her aesthetic leanings were thus an early indicator of her later involvement with outsider art.

Sheldon recalls, "When we started collecting, there might have been maybe one or two galleries working exclusively with outsider art and there were only a handful of people who were collecting outsider art.” Now there are numerous galleries representing this material, there are art fairs devoted to outsider art, and museums have begun collecting the material in earnest. Some of the outsider artists, such as Martin Ramirez, Bill Traylor, James Castle, William Edmondson, Thorton Dial and Henry Darger have crossed over to the mainstream gallery and museum world.

“The Philadelphia Museum of Art has a great collection as does the High Museum in Atlanta and Milwaukee Art Museum,” says Sheldon. “I think the Newark Museum also has an outstanding collection. Seemingly, now some of the other major museums, such as The Met, MoMA, and Whitney have begun to focus on this material.”

“And, it really is differentiating,” Sheldon continues. “If you think about it, there are many good and great collections of contemporary art, but only a relative handful of important outsider art collectors.”

Jill agrees, “I think that what we did with our collection, and because of the time when we started, is a contribution to the broader field in this very narrow, focused segment.” Sheldon points out that in his view outsider art is part of contemporary art to be shown alongside it.

That’s not to say that the Bonovitz’s don’t appreciate contemporary or “mainstream” art — on the contrary. “We love contemporary art — we probably could tell you 20 contemporary artists whose work we would love to have and live with,” says Sheldon. “But, in retrospect, I think focusing the collection enabled us to build something that was novel at the time. It's something we really loved and wanted to support.”

The Bonovitz collection developed organically, driven by aesthetics more than anything else. “What I think drew us to the work was the art itself — and not necessarily the people who were making it,” explains Jill. “It was really the work — seeing it and having it move us emotionally, or visually, or every which way.” 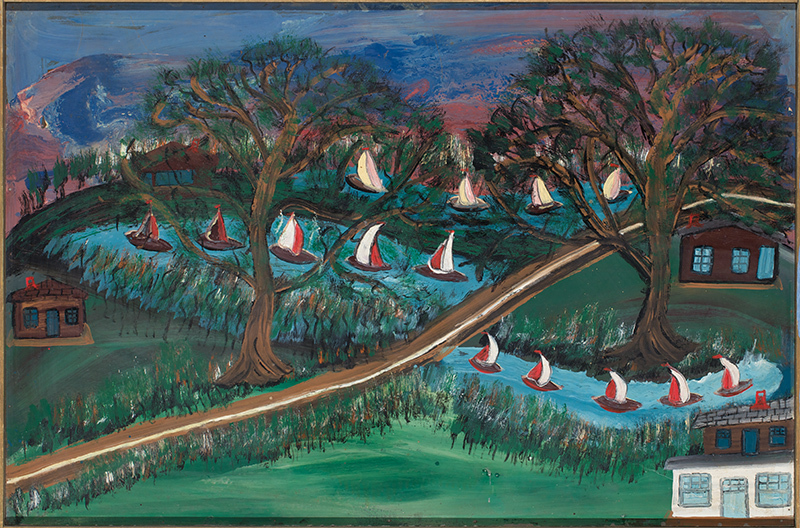 Bruno Del Favero, 14 Sailboats on a River, 32 x 48.5 inches, oil on board. Courtesy of the Collection of Jill and Sheldon Bonovitz. Promised gift to the Philadelphia Museum of Art.

The “self-taught” element of outsider art is also somewhat problematic. As commonly defined, formal training constitutes an economic barrier to mainstream art world recognition. “Take Basquiat, for example,” says Sheldon, “how much art school training did he actually have?” Answer: none. In fact, Basquait dropped out of school at the age of 17.

“Somebody could be really learned, and have gone to museums and read art books,” continues Sheldon, “but still not be considered formally trained. So the ‘outsider artist’ label is very murky.”

For those artists operating outside the academy, as well as the traditional art market, one common theme is the use of found materials. “You know, James Castle would only work with a stick he fashioned,” explains Sheldon. “And he had his own mixture of soot and spit and so on, and he would only use found materials to do his work. When his family tried to give him art materials, he rejected them.” 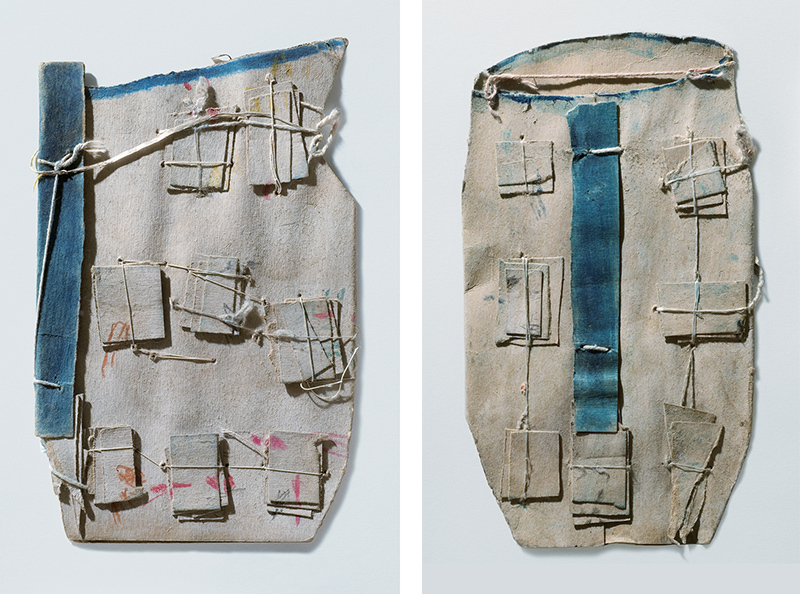 Religious or spiritual revivalist subject matter is another recurring theme. “Elijah Pierce was a real personality. He was a preacher,” says Sheldon. “His work was very thematic, addressing such subjects, in addition to religion, as civil rights—leading inspirational African American personalities and the laborers in the southern cotton fields.”

Many of the artists in the Bonovitz collection are members of marginalized communities, including BIPOC artists that have traditionally been underrepresented in the mainstream art market, outsider status or not. “When you look back at what we've collected, it all ties together,” reflects Sheldon. “But, at the time, it was truly subconscious.”

Jill agrees, “I'm really happy that it is like that, but it wasn’t an intentional decision.”

“There are definitely recurring themes,” says Sheldon, “A lot of the art is very religious, and many subjects are African American. There’s also something about much of the work that is very personal.”

Similar to Jill’s background shedding light on her affinity for self-taught artists, Sheldon’s unique background provides some insights into how he became an early proponent of outsider and BIPOC art.

“My uncle had a wholesale fish company in Cleveland, Ohio back in the 1950s,” Sheldon recalls. “My uncle, father and a secretary were the only white employees, and then there were about 40 or 50 African Americans who worked there. I worked at the company from the time I was about 12 or 13 until I graduated from college, and I got to know the people who worked at the company really well.”

That experience left a lasting impression on Sheldon and also exposed him to communities outside of his own from a young age. “There was one man who I will never forget — his name was Lawrence Smith. Lawrence could speak perfect Yiddish. We had a lot of Jewish fish peddlers who would buy fish directly at the company,” Sheldon says. “Lawrence could speak to them in perfect 'self-taught' Yiddish. Lawrence was a great mechanic. He could fix anything,” Sheldon says. “He was this very sardonic philosopher and a kind of renaissance man, and I just saw this in a lot of the African Americans with whom I worked.” 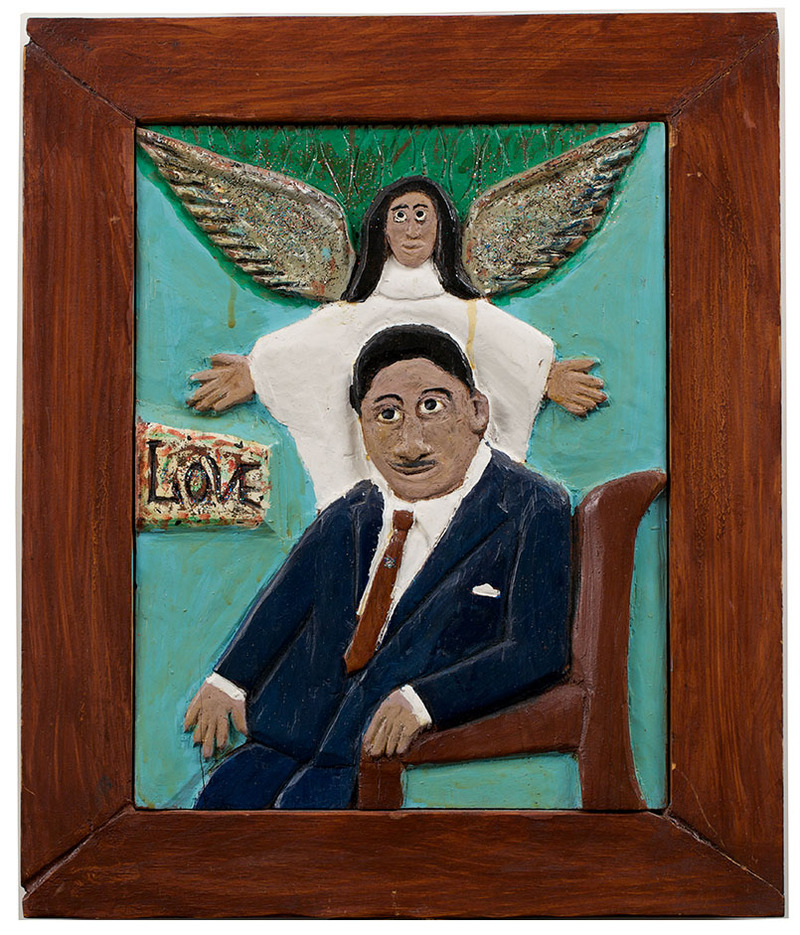 Sheldon and Jill realize the art they collect can provide images of hope, healing, and resilience to audiences who may not typically see themselves depicted in works of fine art. As a result of this, for example, they have facilitated family gifts of work by Purvis Young to Lincoln University, a notable Black college.

The Bonovitz’s have also facilitated family gifts of work by Purvis Young to 130 Philadelphia public schools. “The art teachers use them in their lessons with students,” said Jill, beaming, clearly attuned to the importance of exposing children and adolescents from less privileged backgrounds to important artists from their own communities, who also look like them.

“We had an event at our home to support the School District of Philadelphia and David Hornbeck, who was the then Philadelphia School Superintendent, asked me what appealed to me about the material we collect,” Sheldon explains. “I replied spontaneously there are no fences around genius." The zip code of where you’re born doesn’t dictate intelligence or creativity.

“You know, throughout our history, or at least in the last 100 years, you define artists by a movement they might have been in — it might be Arte Povera, abstract expressionism, conceptual art, etc.; but, at the edges, these definitions are always blurred,” states Sheldon. “The true test is time — if it’s great art, it will persist and be recognized as such.”

Explore more works from the Bonovitz collection of outsider art below. 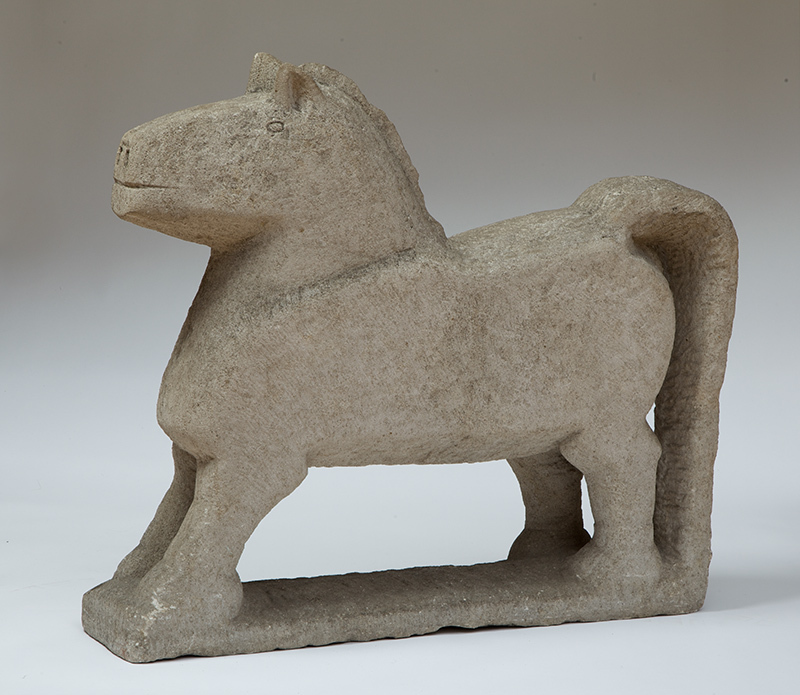 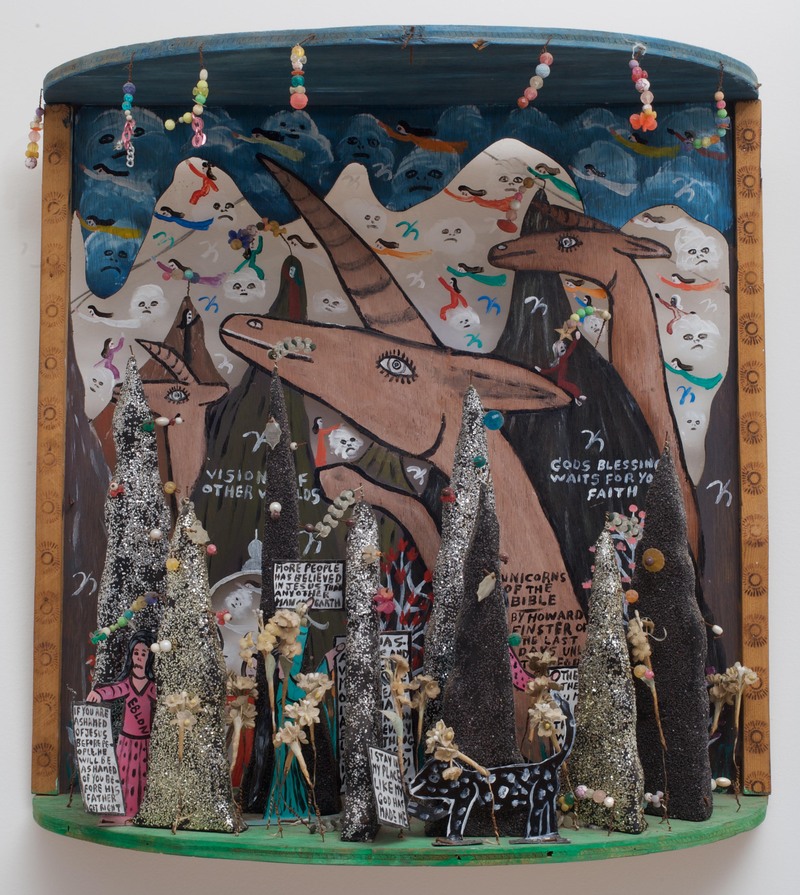 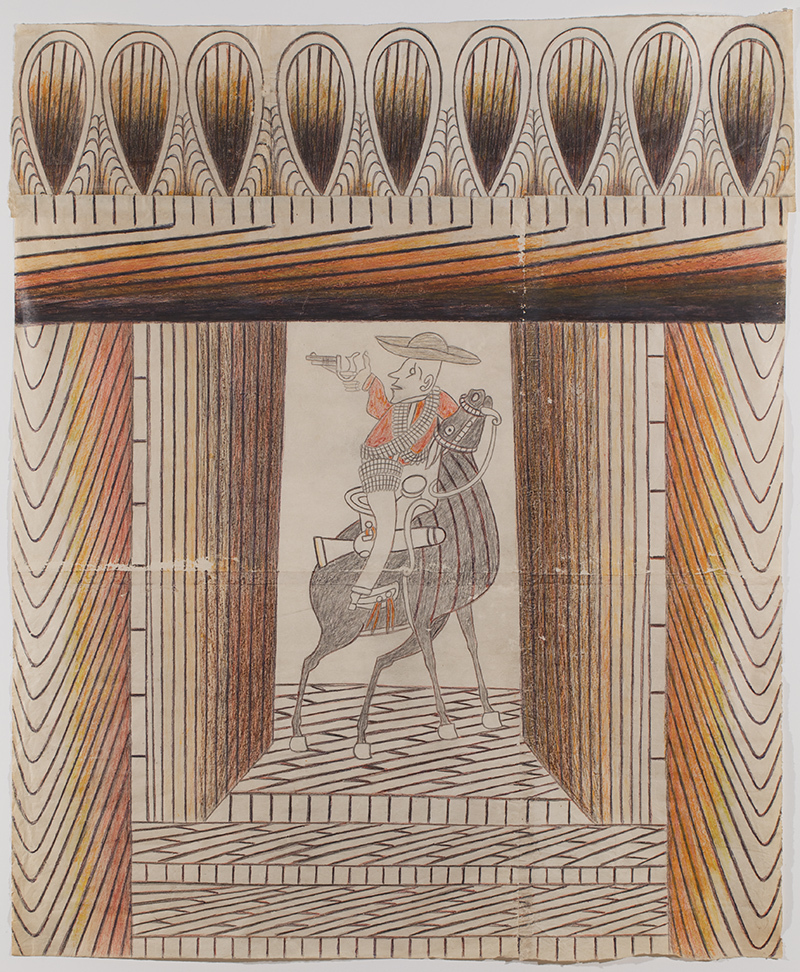 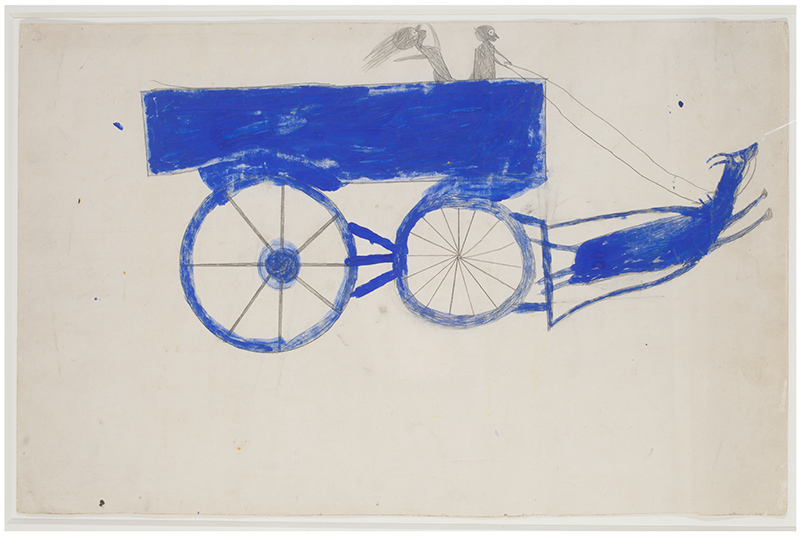 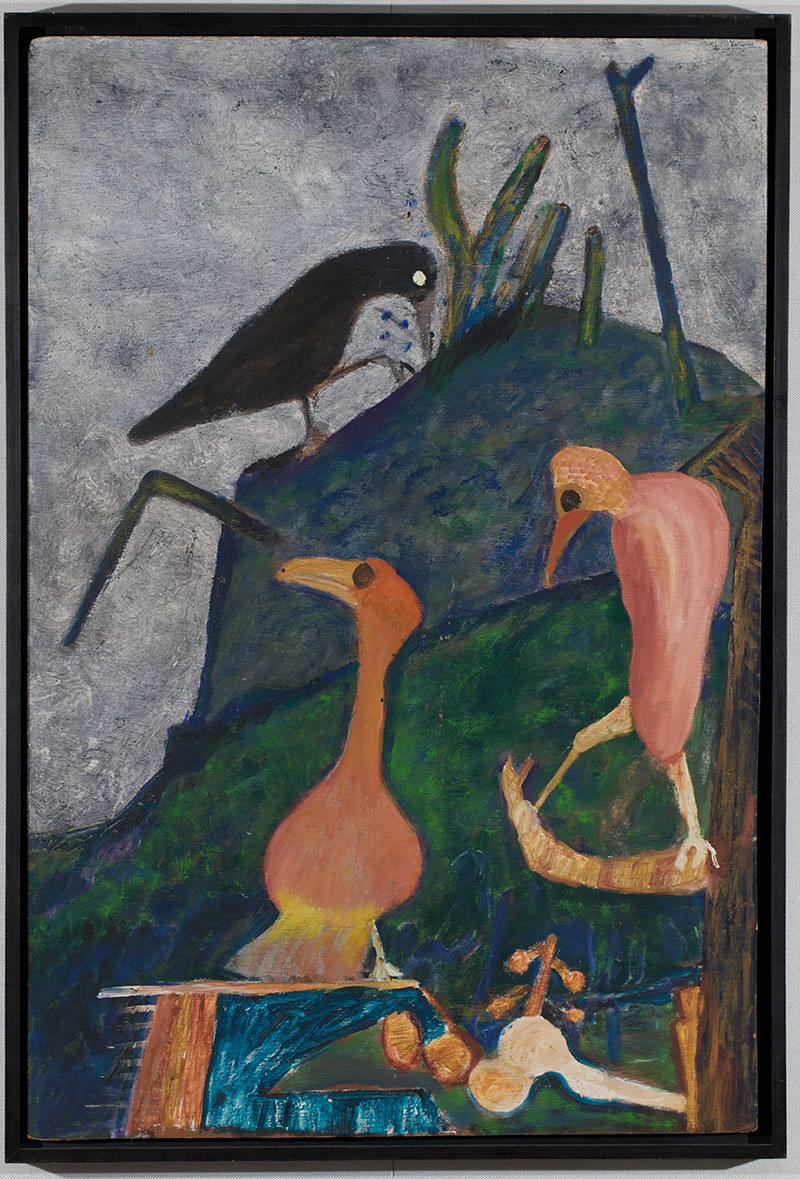 John Serl, Town Dump, 39.5 x 26.25 inches, oil on wood. Courtesy of the Collection of Jill and Sheldon Bonovitz. Promised gift to the Philadelphia Museum of Art. 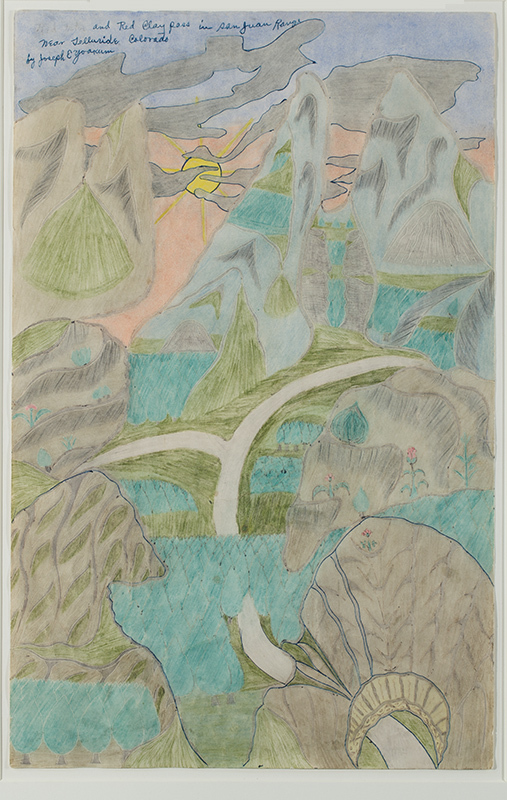 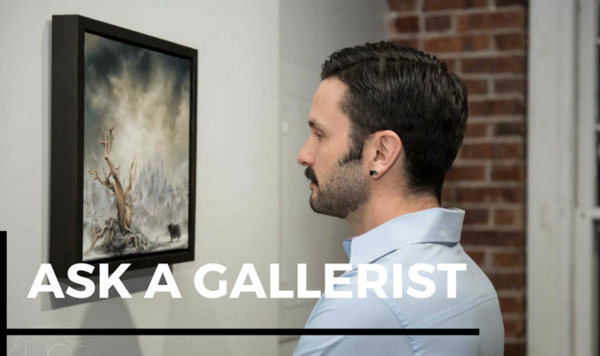 Ask a Gallerist: What is the Best Way to Submit My Artwork to a Gallery?

Increase your chances of hearing back from a gallery by following these 8 tips from seasoned gallerist Erica Berkowitz. 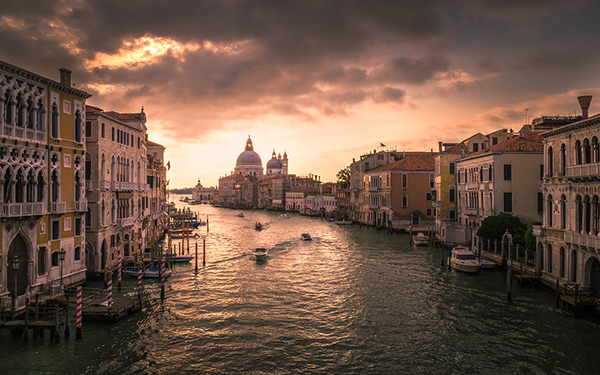 The world's most important art festival finally opens after a year-long hiatus. 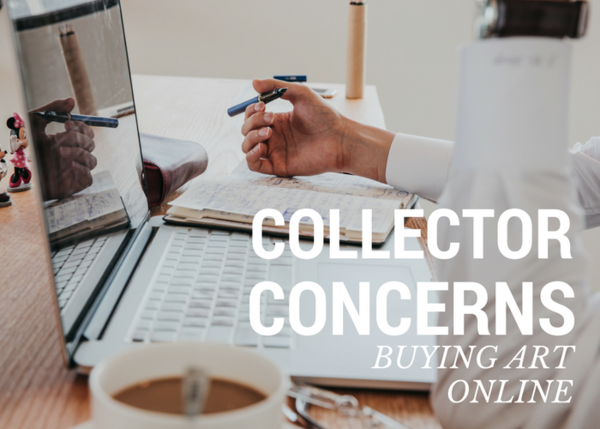 You don’t have to be wary of buying art online to grow your collection. Use these approaches to ease your concerns. 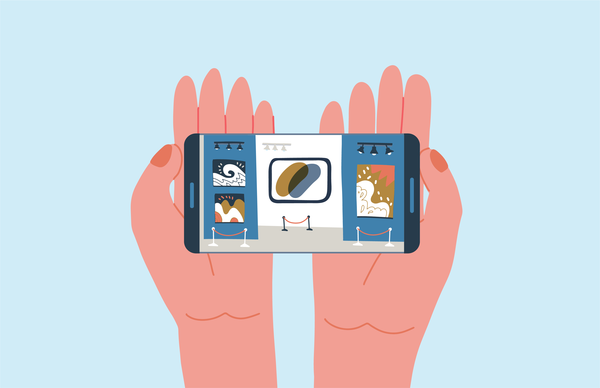 Here are affordable virtual tools to share your artworks while sheltering-in-place.