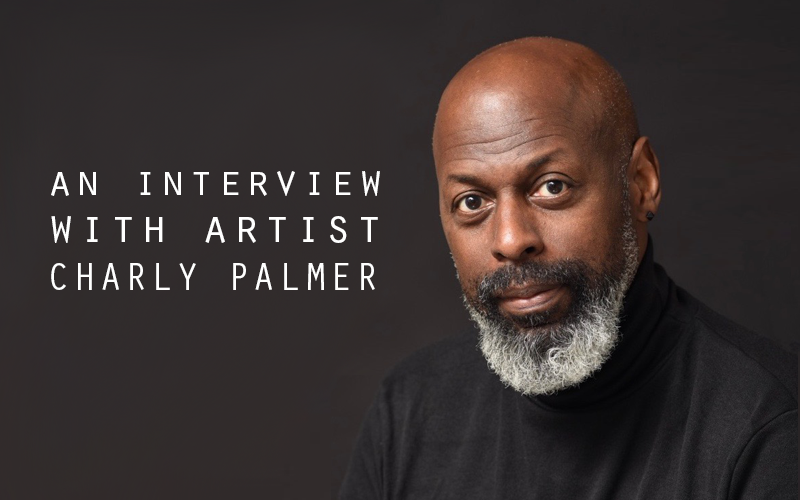 Artist Charly Palmer has been having quite the whirlwind of a year.

In 2020, Palmer was commissioned by TIME Magazine for the cover of their “America Must Change” issue and landed the cover of John Legend's newest album, Bigger Love.

When asked about his success and attention, Palmer is beyond humble. A self-described introverted artist-type, Palmer said the extra attention can be daunting, but that it's changing his career in a rapidly positive way. "What I really want to be doing is creating art, that's what I do," he told Artwork Archive. Admittedly, that can be hard to do these days for Palmer, as his calendar gets filled with more obligations.

Over the course of just a few weeks, Palmer saw his social media skyrocket after Selena Gomez posted one of his paintings to her Instagram account as part of a two-week takeover from Black activists for Black Lives Matter. From there, things snowballed.

A commercial illustrator and graphic designer turned fine artist, Palmer's journey has always been connected to his fascination with the Black narrative. His consistent history of exploring protest and African American history is what initially caught the attention of TIME Magazine. In light of recent social events in the United States that have brought forward the racial inequities deep within our systems of power, Palmer's work highlights the beauty, pain, and hope of the lived African American story.

We caught up with Palmer to learn more about his meteoric rise to national attention.

You can see more of Palmer's work on his Artwork Archive Public Profile.

AA: What was the process like to create that Time Magazine cover?

CP: When the Creative Director of TIME Magazine contacted me and asked if I was interested—I think he saw that there was a consistent theme about protest and African American history—he left it up to me about what I might want to paint. I did initially submit eight rough sketches, which is what I would do for any job. I would submit a few rough sketches and make notes because a lot of it looks like scribbles or an extremely rough draft.

Before I begin, I grab as much reference material as possible. The last few protests led to the lighting [on fire] of the police car and the destruction of a building, images that we've all seen in the media. I decided I wanted to incorporate that, but also put a big focus on the protesters.

The narrative of the piece is really about my concerns that Black children are still afraid.

I'm a child of the Sixties, and I thought by the time we got here it would no longer be an issue that our children are afraid to be heard about the misunderstanding and hatred that still exist. The narrative is that, although little people may not be totally informed, they're aware of some of the things that are going on—and these things scare them. So, the narrative behind the piece is that they know you're afraid. 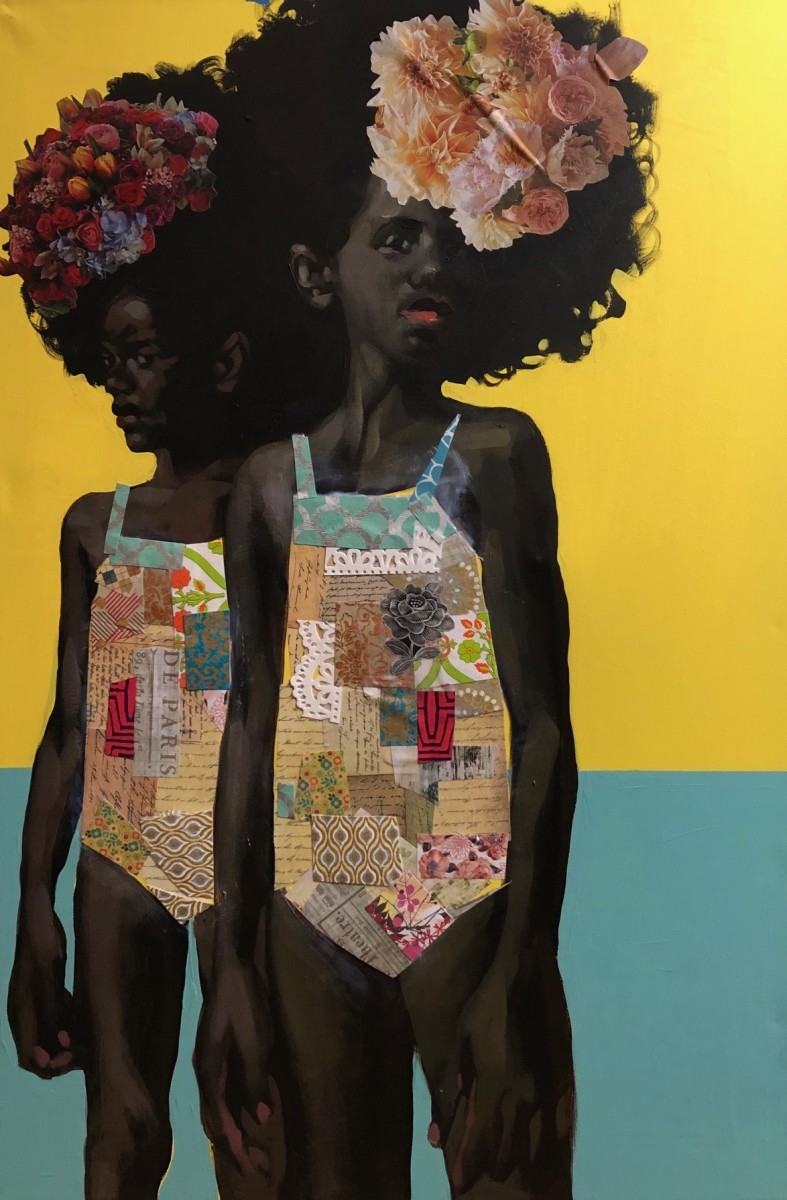 AA: What does it mean to you personally to have your work on the cover of TIME?

CP: Quite honestly, unreal. They sent me some mock-ups early on using other images of things I did before the cover design—and just the look of the mock-up of my art on TIME Magazine, it was unreal.

It was easy to be quiet about the cover to my friends and family because when I talked to the Director of TIME, he said anything can happen in the news between now and then that could remove your art as a cover. There were a lot of things going on [in the news], and I was waiting with bated breath hoping nothing terrible would happen. I know that's very selfish, but I wanted to be on the cover of TIME Magazine [laughing].

AA: How do you think art can be used for social change?

CP: Historically, art has been a vehicle to make people aware of what's going on. I think there's a really great quote by John F. Kennedy that talks about the role of writers and poets to document history about what's going on at different times.

My personal belief is that it's our role to make people aware of what's going on now.

But, there are artists that choose to do abstraction or they choose to do landscapes or still lifes and that's their choice creatively. But, for me, it's always been about telling the story about being Black in America. It is the awareness of who I am. If you would pull works from 20 or 30 years ago of mine, you would see that it was still there. It's altered, it's changed, it's become more subtle, but that story has always become part of the narrative.

AA: Beyond the TIME Magazine cover, you also recently completed the John Legend album cover. What do you think made it possible to lead up to being here for you?

CP: What came before John Legend was getting a call from Selena Gomez's manager asking her permission to use one of the images I had created for one of her posts. She was dedicating two weeks of her social media content to make a statement about Black Lives Matter, but they wanted to start with an image addressed the racism in America. Though I wasn't entirely familiar with her, I recognized the impact it could make and said, "absolutely."

About a week later, John Legend's team contacted me and it was the same situation. They said, "would you by any chance be interested in doing a John Legend cover?" It happened to be the day after April Fool's Day and I was just thinking that this would be an awful April Fool's joke [laughing]. But I told them I would love to be involved. They told me they were going to send me some of John's music which hadn't been released yet. And, you have to understand, I've already been a huge fan of his music. So, to sit down and listen to the music before the rest of the world could hear it, it was just absolutely beautiful.

I saw right away after talking to John that he had a connection to South Africa. My partner and I spent a month in South Africa just prior to the pandemic, and I was taking lots of pictures while I was in Cape Town because I was inspired by the landscapes. I didn't know what I was going to do with them, but I brought this up with John. There's a very popular Miles Davis cover called "Bitches Brew" that has landscapes and flowers, and I told him I could imagine his cover being similar to that.

AA: Do you think your work as a commercial artist has informed how you run your fine art career?

I went to art school initially as a fine artist at the Art Institute of Chicago. But, at the time, I realized there wasn't enough for me on the basic fundamentals of painting and drawing, so I transferred to the American Academy of Art. I really liked learning the techniques, but they also focused on placement. Once you completed the program, they brought in major corporations that were in need of artists and they recruited the best of the best and hired them. I needed to know that once I left there, I would get a job—and both of those roles prepared me for the role that I'm in now. 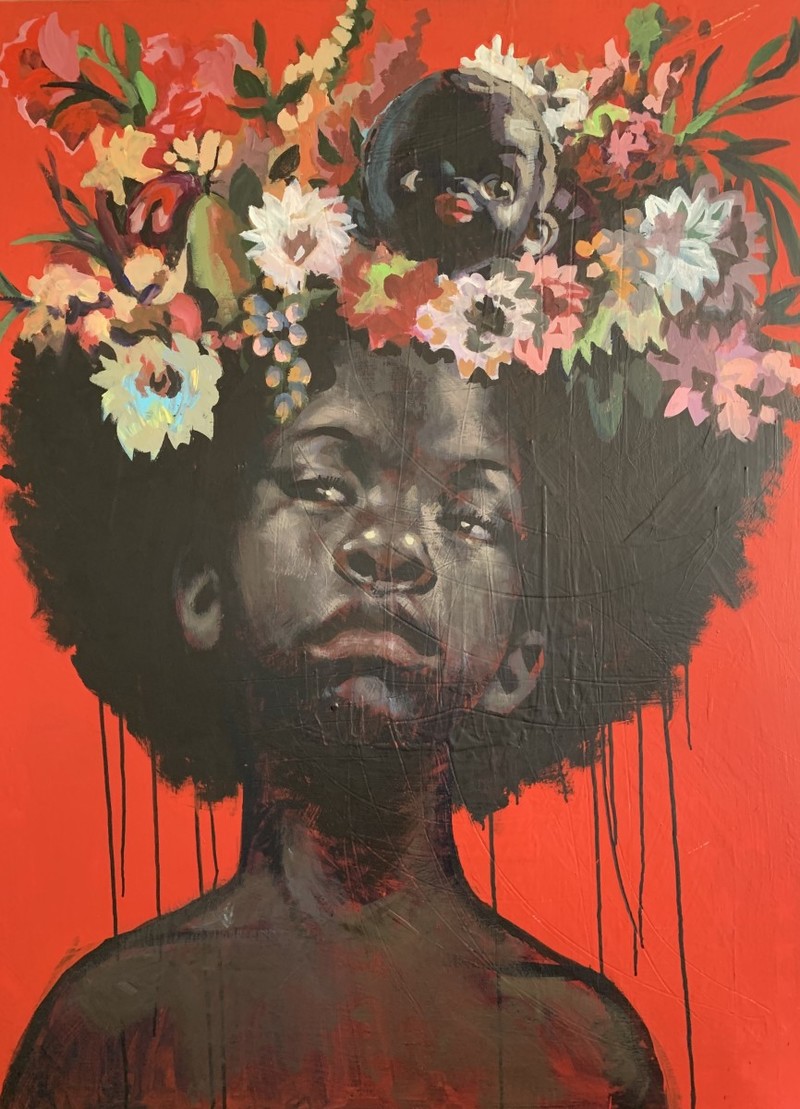 AA: How do you ensure that clients are satisfied with a project?

CP: There are times when you realize that you and the client are very far apart in our visions. As a fine artist, or even in commercial work, you can find yourself in different places than what the person is hiring you for.

I'm at a point in my career that if I realize that a project just isn't for me, then I'm comfortable opting out. Again, I'm appreciating the fact that I'm getting paid for this opportunity, but I always ask myself, "does this speak to what I believe in?" That's become fairly important to me.

I don't want to do a project just because it pays well. I want to know that I can wrap my mind and my heart around what it is that's asked of me.

AA: Why did you choose to Archive your work? What legacy do you want to leave with your work?

CP: It's so that when someone looks at what's going on right now, 20 years from now, they can look at the art to get an idea about what was going on in the world. It's the thing that moves me. I think that as artists, we are very emotional creatures. Some artists, they work best when they are depressed or sad—I'm not one of those artists. I'm one that operates fast when I'm inspired. Sometimes I'm inspired to see if I can do something to change the situation.

But, I doubt that my subject matter will change drastically when that day comes because I operate from the perspective of a Black man—and that will always be part of the narrative in the work that I do. 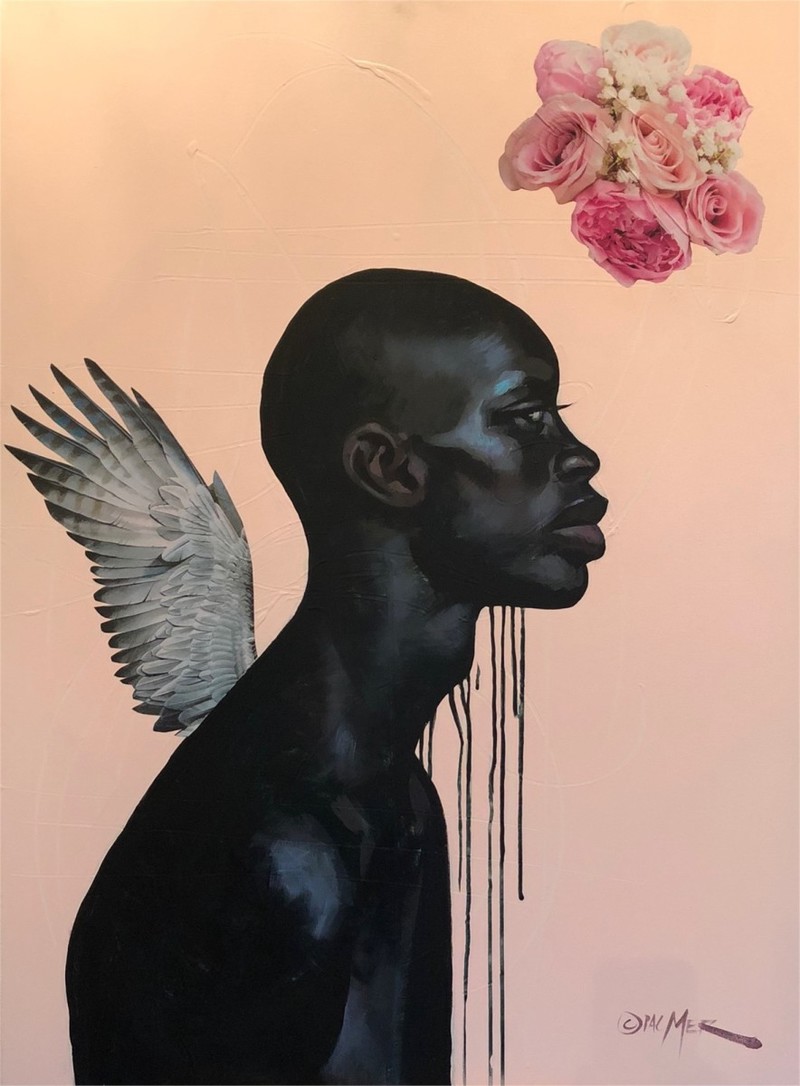 AA: What's something surprising you have learned from the recent exposure?

CP: What comes with the notoriety and the attention is a great deal of criticism. To maintain your focus, you have to not spend so much time looking at the praise or criticism. Because, realistically, you can't have one without the other. So, it's just better to do what you've been doing and not spend too much time with those who will praise or criticize— just focus on doing your art.

You can get a million likes and comments and when one person says, "you suck," you're like, "Why? What did I do?"

We also have to understand that, as artists, as much as people are going to want your art, some will not like your work. We have to accept that as part of what comes with the territory.

The extra attention can be daunting at times, but I’ve received it because it’s also changed my career in a very positive way.

See his full portfolio of works on Artwork Archive's Discovery platform. On Discovery, you can connect to collectors and art lovers around the world. Palmer told us, "When I started using Artwork Archive, I started getting more attention and more people finding me. Suddenly, at least daily, even before John Legend and the Time cover, I was getting a request on a daily basis through the Discovery platform."

Launch your web presence and grow your art career with Artwork Archive. Sign up for a free 30-day trial to see for yourself. 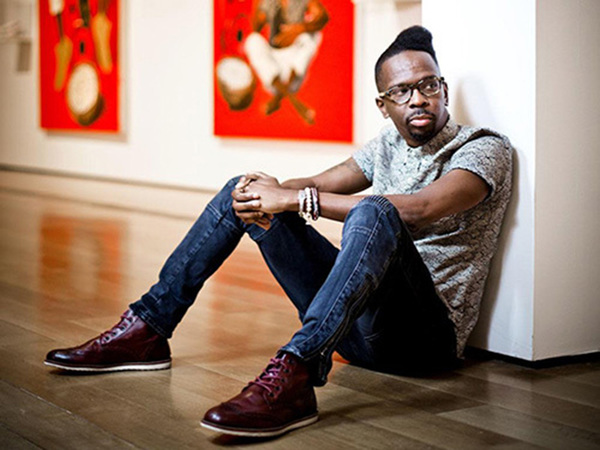 Artist and scholar Dr. Fahamu Pecou says there is no such thing as luck. Learn how he has rocketed to the top of the contemporary art scene by grabbing opportunities. 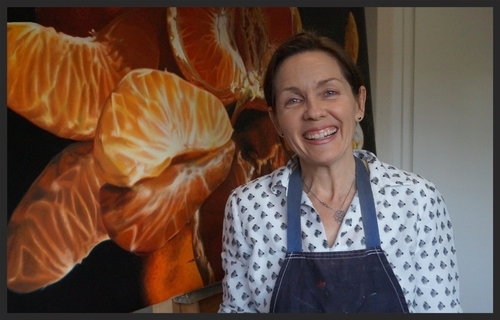 Advice on How to Make a Career Switch to the Arts

Finding herself at a crossroads, Australian artist Anne-Marie Zanetti decided to take a year and do what truly made her happy—paint. She tells us how she turned this passion into a flourishing alternate career. 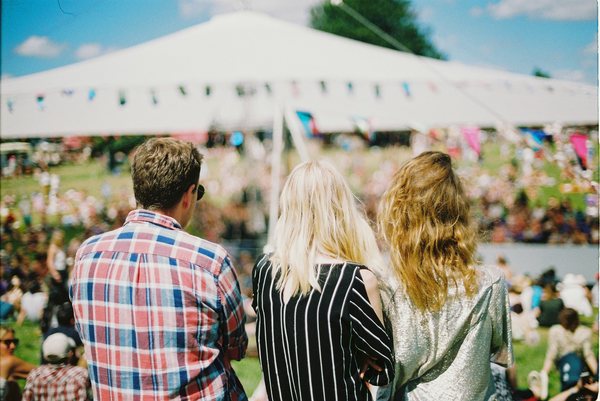 Is Being Social the Key to Art Business Success?

Learn why relationships in the art world are indispensable and where to meet the right people to boost your art business. 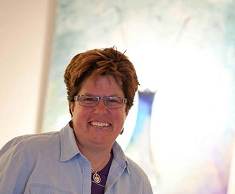 Jeanne Bessette was once told “artists can’t make a living,” now she is collected all over the world. Learn how this painter built a business that supports her passion.