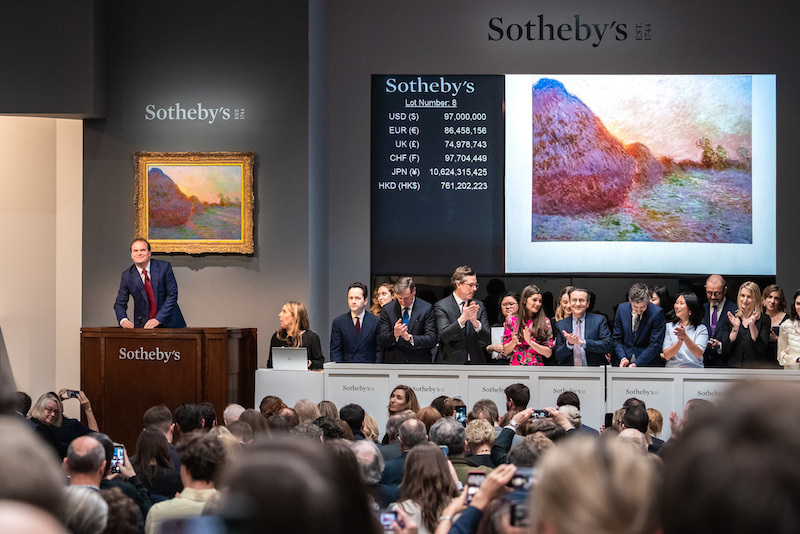 One small bunny made a significant impact this past spring. Jeff Koons’ Rabbit set the record for the most expensive work sold at auction by a living artist. The 3-foot tall stainless steel inflatable bunny sculpture was bought for a whopping $91 million.

Art dealer Bob Mnuchin, the father of U.S. Treasury Secretary Steven Mnuchin, made the winning bid at Christie’s auction. Rumors spread that Steve Cohen, hedge fund billionaire, was the mystery buyer. Cohen denied purchasing the work, but he was soon after outed by Artnet.

The Koons purchase was part of a big spender week. Bloomberg reported that $2 billion worth of art was sold in New York City during the week of May 13-17, 2019.

The most expensive work of the week was a painting from Claude Monet’s celebrated “Meules” (Haystacks) series. At $110.7 million, it set the world record for an Impressionist work.

Other artists like Anish Kapoor ($85 Million), Takashi Murakami ($100 Million), David Hockney ($40 Million) and Chuck Close ($25 Million) are in the top ten. Sadly, in that top tier, there is not one female artist. 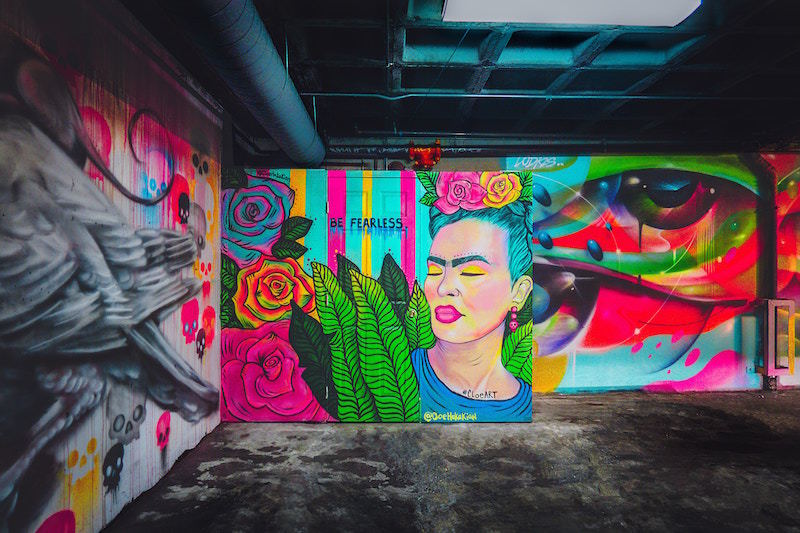 Latin American art is spicing up the art market.

For instance, Colombia’s Fernando Botero is popular in Asia for his depictions of voluminous people and animals. Some of his works have been commissioned as public sculptures in Singapore.

This past spring the Hermitage in St. Petersburg, Russia hosted an exhibition of works by Roberto Matta, a Chilean who blended Surrealism with Abstract Expressionism.

Garza explains that Latin American art (even from some of the biggest names like Frida Kahlo and Diego Rivera) command a far smaller price tag than their Western counterparts by saying, “with a million dollars you really can buy a masterpiece”. He continues that for someone seeking a modern or contemporary US or European work, the same amount of money “will not get you very far". For this reason, collectors are increasingly eyeing works from Latin America.

There is a new generation of collectors from Asia.

The world’s second-largest art market after the U.S. is China. According to The Art Basel and UBS Global Art Market Report 2018, China accounts for a third of the $63 billion (and growing) global art market. Not surprisingly, the survey concludes that Asian representation among the world's top 200 collectors has increased from 5% to 30% over the past decade.

And, within the Chinese market, there is a shift with a new class of collectors emerging. Who are these new collectors?

According to the 2019 Art Basel and UBS Global Art Market Report, 46% of collectors in Singapore and 39% in Hong Kong are millennials, which is in stark contrast to the West, where most collectors are over 50. Young Asian collectors are reported as being markedly more active—buying twice as many new works in the past year as their older counterparts.

And what are they collecting? Wei asserted that this younger demographic are drawn to Western and Contemporary art.

Sotheby's is bought by a telecom executive for $3.7 billion.

Sotheby’s will be acquired by billionaire telecom magnate and art collector Patrick Drahi in a surprise $3.7 billion deal. Sotheby's will return to private ownership after 31 years as the only publicly traded major auction house.

“This acquisition will provide Sotheby’s with the opportunity to accelerate the successful program of growth initiatives of the past several years in a more flexible private environment,” Tad Smith, the chief executive of Sotheby’s, said in a statement.

The deal means that the two largest British auction houses that dominate international sales of fine art, real estate and collectibles (Sotheby's and Christie's) will both be owned by French billionaires. Christie's has been owned by luxury goods tycoon Francois-Henri Pinault's investment company Artemis since 1998.

Everyone can agree that the exhibition, Hearts of Our People: Native Women Artists, is long overdue. It is the first ever museum retrospective of Native American and Canadian female artists.

The show hosts work by over 115 artists from 50 Native communities.

“This is the first, believe it or not, show devoted to Native women artists,” said Jill Ahlberg Yohe, who co-curated the exhibit with Teri Greeves. “It’s the first to honor Native women from ancient times to the contemporary moment.”

According to Yohe, “90% of Native art is made by women.” The diverse works span from pottery, textiles, painting, to photographic portraits, and even to a gleaming El Camino. You can learn more about the exhibition here.

Sotheby’s announced that it will relocate its future Aboriginal art auctions from London to New York. Many speculate that this is a sign of increasing global interest for Australian indigenous art.

The first Aboriginal art sale by Sotheby’s is set for November 2019 and will mark the first time an international auction house sells indigenous art outside London or Australia.

Steve Martin has become a champion of Indigenous Australian art. He told Australia’s ABC, “I never talk about our art collection because it’s our private sanctuary, but I am so enthused about the Indigenous art.”

Billionaires' nonprofits become a part of the art world.

In the last decade, several major private museums have opened their doors to the public. These include institutions like the Walton family's (re: Walmart dynasty) Crystal Bridges Museum of American Art in Bentonville, Arkansas, and Mitchell and Emily Rale’s Glenstone in Potomac, Maryland.

Many collectors have huge private foundations and collectors and are bringing their artwork into the public sphere.

Want to continue learning about today's art market? Sign up for our newsletter and get thoughtfully crafted tips and resources in your inbox once a week. 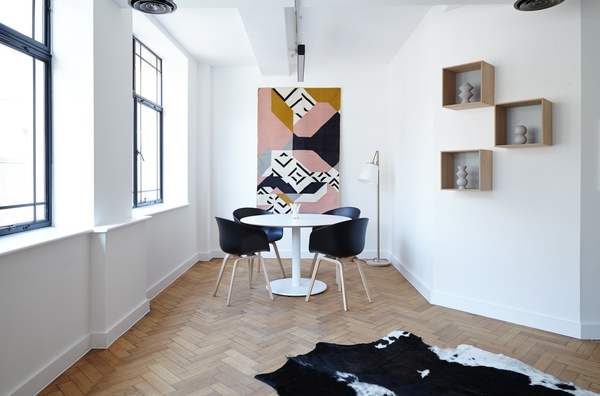 Can an Art Consultant Help Protect Your Collection? 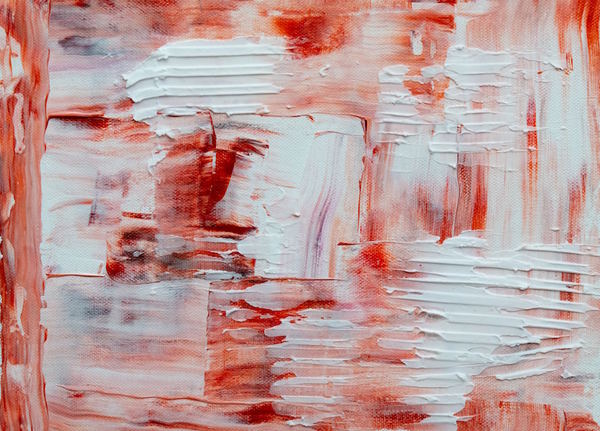 How to Buy Emerging Art for Your Corporate Collection

Not everyone can afford a Picasso. Emerging art is an affordable and exciting option for your collection. 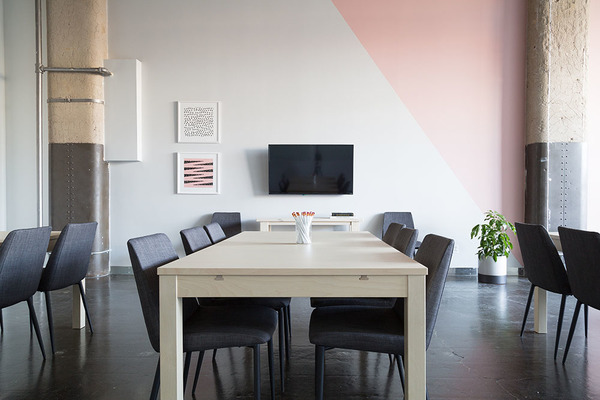 Why Having a Corporate Art Collection is Good for Your Business

If your business isn’t collecting art, you could be missing out on these 5 major benefits. 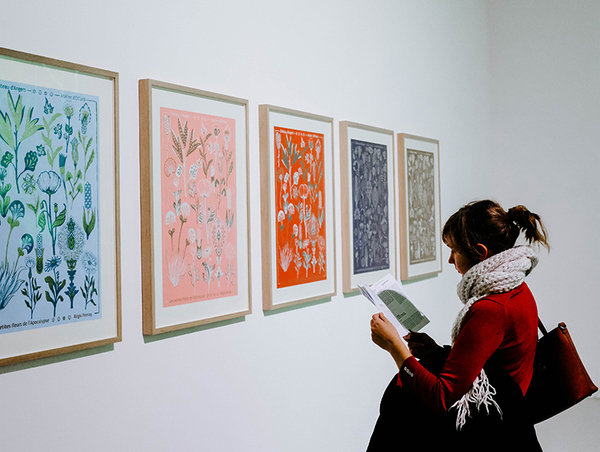 You don’t need to be an art historian to build the collection of your dreams. Try these 9 tips for emerging collectors.