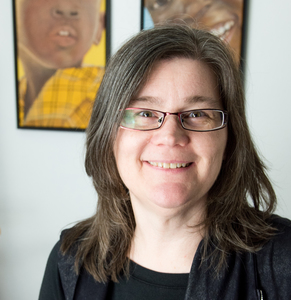 Rebecca experiments with the balance between realism and abstraction, a dance between tiny details and simplifying to only what is essential.

As a child, Rebecca loved to color and draw. Nearly all of her time was spent creating art and doing crafts with her mother. During high school, she showed great potential but was not convinced that being an artist was the right career path. She was unsure of what she wanted to do so she simply joined the workforce and put off going to college until she was thirty. By that time, Rebecca had discovered graphic design and thought it would be a great way to make a living while being creative, so she enrolled in college to learn all she could. After getting a degree in graphic design she went out to find the perfect job. Turns out graphic design was not the right path for Rebecca, too many people telling her what to do and stifling her creativity, so she quit and became a barista.

Then one day, she was offered what would become her dream job in the most unexpected place... administrative assistant for the art department at the University of Dallas in Irving, TX. She is surrounded by art and artists and it keeps her learning and gives her inspiration. It allows her to use her creativity and graphic design skills and even paint during her time off.

Rebecca paints a variety of subjects; however, she is most known for two different series.

The first consists of portraits of children she met in Uganda while she and her husband were visiting the two boys they sponsor through Compassion International. The thirteen portraits in that series have been used to spread awareness of the wonderful work Compassion is doing in Uganda and throughout the world to release children from poverty in Jesus’ name.

The second series concentrates on the infiltration of cell phones in our society. Depicting three subcategories to communicate the message. The moments people miss because they are engrossed in their phone. How people are more focused on documenting an experience rather than actually experiencing it. And taking inspiration from famous images and artwork, re-imagine and modernize them by including a cell phone.