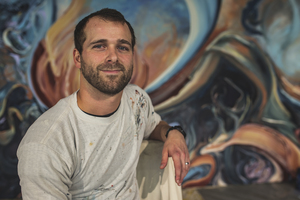 Originally from Galliano, LA, Guidry received his BFA(2012) from the University of Louisiana at Lafayette. Heavily influenced by nature in his native Louisiana, the organic forms in his paintings are constructed intuitively. Through the physicality of paint, Guidry’s intention is to represent nature rather than attempting to imitate her. The correlation between the isolation in nature and the isolation within oneself is the backbone of Guidry’s work.