This morning, Friday March 20, fr Albert Carpentier died in Antwerp. Born September 4, 1918 in Zandvliet near Antwerp (Belgium), he made his first profession in the Order of Preachers in the Province of Belgium in 1938 and was ordained a priest in 1944. After studying at the Ecole des Beaux- Arts Saint-Luc in Ghent, he left for Japan in 1949, where he began by studying Japanese art in Tokyo. Throughout his long presence in Japan alongside the brothers of the Province of Canada, he made representations of great Dominican figures and biblical scenes, whether in silkscreen, linography or stained glass. The use of big black outlines and the renderings of big hands echo the Flemish expressionism he saw in his youth. In Japan, he decorated several churches and chapels. For the Saint Albert-le-Grand Convent in Montreal, the provincial house of his adopted province, he painted large-format paintings. After his return to Belgium in 2014, fr Albert continued to work in the bedroom of his nursing home, where he joined the Risen Christ at the age of 101. See https://www.op.org/albert-carpentier-a-rejoint-le-christ-a-anvers/?lang=fr 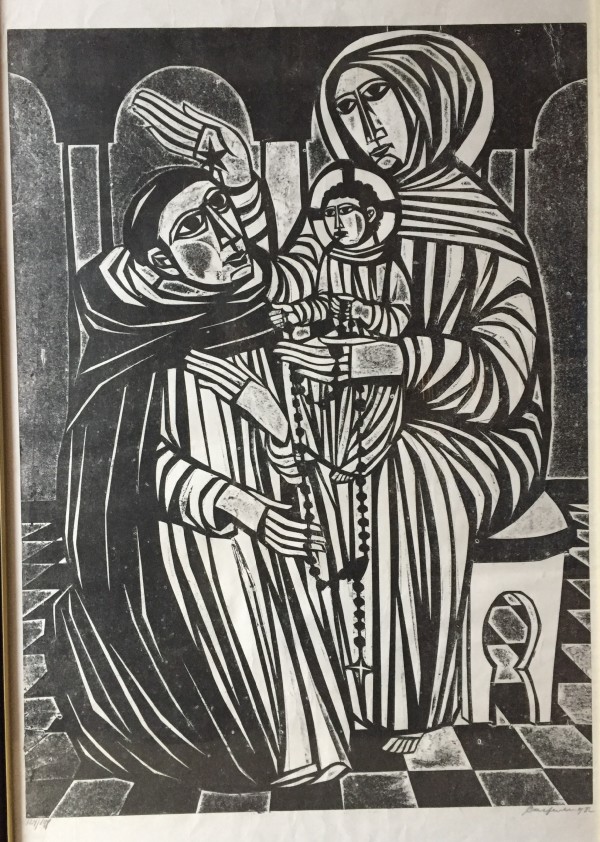 28 x 19.5 in
Ink On Paper
Cookies help us deliver our services. By using our services, you agree to our use of cookies. Learn more