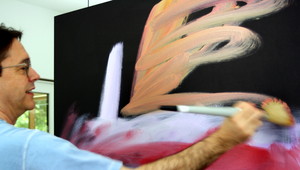 Wendell Myers is a creative soul from way back. He first entered the public eye as bass guitarist for the noted Central Wisconsin blues/country-rock foursome "Cambridge." After several years of playing clubs, high school dances and backyard cookouts, he took the fateful step of leaving the band to attend art school, earning a BFA from Peck School of the Arts at the University of Wisconsin, Milwaukee. He spent the next years as a professional studio potter, first in Milwaukee, and then in Rochester, New York, selling directly to the public out of his studio and at art fairs and shows in the Midwest and Northeast, and through shops and galleries in Wisconsin, New York and Kansas City. He accompanied his wife to Minnesota when she joined the music faculty at Winona State University. The couple eventually relocated to Winston-Salem, North Carolina, where Wendell turned to painting, working in acrylics. He continues playing guitar in his spare time, especially focusing on jazz and blues.