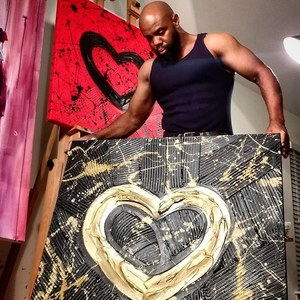 Tariq Mix was born in Long Island, New York in the spring of 1981. When he was three, his parents moved to Durham, North Carolina. As a young boy, Tariq found that he had a love for art and sports. He was always drawing – in class, in textbooks, on tests, on homework, on his notes, everywhere! When he was not drawing, you could find him racing the boys in the neighborhood, playing football, basketball, or riding his bike through a new trail in the woods.
During his teen years, Tariq began developing his body strength as well as his artistic talent. In high school, he played football and ran track with the dream of competing in professional sports. He worked hard academically and at sports, and was accepted to Howard University in 1999. While at Howard, Tariq received a track scholarship and majored in graphic design and fine arts. It was here that he developed a love for the fine arts and began exploring various mediums. He painted, constructed illustrations and learned about the art of photography.
Tariq received numerous awards for his academic and athletic achievements. He loved competing in track and dreamed of running in the Olympics one day. That dream changed in the spring of 2001. While competing in the Pennsylvania relays, one of the major track meets of the year, Tariq collapsed after running the 100m dash. He was rushed to the hospital and diagnosed with a near-fatal ventricular arrhythmia. He returned to North Carolina and was immediately admitted to Duke Medical Center. After a nine hour procedure on his heart, he was told that he could never compete again.
Although devastated, Tariq would not let this stop him. He could not compete physically, but made up his mind to compete mentally, to keep his soul and talent alive. He would now live through his art work. With vibrant colors, energetic lines and shapes – he breathes. He tells a story in every one of his pieces.
Tariq went on to graduate magna cum laude in May 2004. Today he puts all of his energy into his art work.