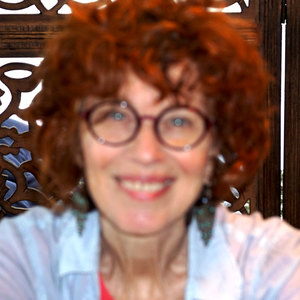 Susan Bloch is a glass artist living on the Northern California coast. She is inspired by the people she meets and the drama of her natural surroundings.

Susan Bloch is a commission and exhibiting artist. She began her career in glass doing large commissions for architects and individuals. Experimenting with techniques for more than 30 years developed her mastery of glass carving.

Moving to California in 2004 was a turning point in her life as was her father's critical illness. Both changed the direction of her art.

The resulting carved faces question the human experience. She states, "I am connected to our human vulnerability while working with glass. My process of sand-carving requires patience and leads me towards awareness."

Her work shifted once again after caregiving for her father through his death in 2016. Faces became smaller and surrounded by wing-like or plant-like forms. Backgrounds became emphasized because air appeared teeming with life.

Bloch earned her BFA in glass and sculpture from Alfred University in NY. She studied painting at Boston University as well as New York Studio School, both instrumental to her art career. Her work appears in books and publications. She exhibits internationally.

• Clemens Center for the Performing Arts

2012 Juried as Exhibiting Member of Clay and Glass Artists

funded by NY State Council on the Arts