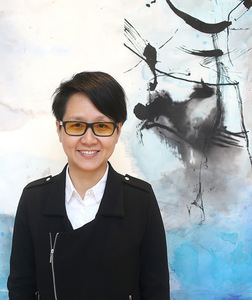 YEO Shih Yun (1976, Singapore) graduated from the National University of Singapore in 1998 with a Bachelor degree in Business Administration. She then joined LASALLE-SIA College of the Arts and completed a Diploma in Communication Design in 2001, prior to her pursuit of the Post Baccalaureate Programme in painting at the San Francisco Art Institute in 2002.

Professionally, Yeo is known to reinterpret the very act of ink painting with striking results. Her experimentations with the fusion of the traditional form and contemporary mediums, such as new media or performance art, have garnered much acclaim, including a commission by the Singapore Art Museum and the recognition of the Sovereign Asian Art Prize People's Choice Award in 2012 as well as the UOB Painting of the Year Competition in 2007. Additionally, Yeo has held solo exhibitions in Singapore, Japan, and Germany, along with other group exhibitions on the international scene.

In 2017, her first book, INKPULSE: the art of Yeo Shih Yun, was published. The volume conceptualises Yeo's pulsating pursuit for new depths and new perspectives within and beyond the realm of Abstract Expressionism.

YEO is also the Founder of the independent art space “INSTINC” in Singapore, where she currently lives and works.

“What drew me to the medium were its historical richness, the temporal quality of landscape ink painting, the physical strength and boldness of the black ink and its generosity and infinite possibilities. Also, black is the lack of all colours of light, or an exhaustive combination of multiple colours of pigment.

My abstract works are paintings and drawings at the same time. Paintings/drawings of geometric and organic shapes and lines, composed of layers of ink, acrylic and other mediums allude to the gestural surface marks of Abstract Expressionism. My paintings/drawings reflect not only with the radical conflict between the two “colorless” colors (black and white), but also their interaction and interdependence.

My works continue to explore the mystic aspects of the drawing process (accidental and impermanent manifestations). Change and transience are important in her creative process. I am fascinated with random occurrences, improvisation, and the liberating qualities of non-traditional tools such as rollerblades, watering pot, trees, toy robots and remote control cars. Using inventive and playful tools as such to create eccentric forms or spontaneous arrangements without the constraints of a limited visual vocabulary, creating works of absolute freedom and honesty. My main goal of using these tools is to surrender authorial control, to release drawing from its enslavement to the artist’s hand and in some cases to outsmart my own will and intentions.”