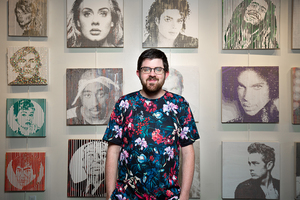 Sean Christopher Ward is an interdisciplinary artist focusing his efforts of painting in the style of op art, with major influences from Masters of the movement, like Bridget Riley and Victor Vasarely, who utilize flat design to create depth and kinetic movement through strict hard edges and the utilization of masterfully placed colors side by side or next to negative space to keep the works constantly moving within the optics of the viewer. Now extending past the singular flat plane, I am expanding to fully immersive projection mapping experiences, where the artwork surrounds you in every direction! Overall, both painterly and digital immersive artworks, I utilize a process to create my artwork that is a mixture of traditional and digital techniques. It begins in the digital realm of Adobe Illustrator to create the design of the works first and foremost, to achieve ultra-crisp and planned results, then transitioning into the traditional realm of hand painting all the fields of colors onto the individual layers of the painting. Then, with projection mapping and animation creation, I utilize Adobe After Effects and Resolume Arena to create these immersive environments that go hand and hand with the art, and sometimes, the musicians, I partner with to create multi-media exhibitions. The multiple processes sounds overwhelming, but it has become common practice for Sean’s different styles of works to utilize every method of technology possible to create and maintain a commitment to excellence through the weeks of time it takes to complete each individual piece. With works in over 875 permanent and private collections spanning the world, including Canada, France, Germany, India, Italy, Morocco, Japan, Puerto Rico, Qatar, Singapore, the United Kingdom and the US Virgin Islands, the reach of the artwork is expanding as each year progresses! Notable works in private collections include Bob Dylan, Julie Floyd, Julien Hall, Elton John, Milan Kordestani, Aaron Lux, The Center for Women’s Wellness, The ICT Pop-Up Park, The Pixies and Universal Studios Japan. One of his most recent ventures is working alongside Aarox Lux to turn Sean’s artwork into four two story walls on two beachside homes in Cabo, Mexico, to give some creative flair to the community!

“Fading Identities” is an homage to the individuals of our past and present, who may not always be there as a picture-perfect image in your mind, but rather, as a general image of their identity. This is not something that is intentioned to occur, but it is just a process of being human and having fragments, or pieces, of these memories unavailable for recollection. Throughout the past several decades, there have been psychologists studying cognitive ability that have defined the two primary memory systems in the human mind. There is a short-term memory, or “working” memory that holds information about just a few things that are currently on the individual’s mind, but only for a temporary period. Then, there is a long-term memory that can hold immense amounts of information gained through the individual’s lifetime of thoughts and experiences. Each of these memory systems vary in the capable extent of the amount of detail that can provide to the individual. Working, or short-term, memory provides very detailed mental images about a few things that have been on the individual’s mind. While long-term memory is about providing a vast assortment of numerous details, but all to a less crystal-clear image, which the memories, based on their experiences and sights, might seem fuzzy to the viewer. Over time, it is inevitable that the memories begin to fade from their crystal-clear beginnings, and that is where science comes into play again. The information capacity of human memory has an important role in cognitive and neural models of memory, recognition, and categorization, because these process models implicitly or explicitly make claims about the level of detail stored in the individual’s memory. Detailed short-term representations allow more computational flexibility because they enable processing at task-relevant levels of abstraction, but this is traded off with the amount of additional storage available in the mind. We cannot always encode the details of these images perfectly, yet the human mind is a wonderful tool that consistently is able to interpret pieces of a memory and shape these mental forms into a successful recollection of the thought. Much like this process of memory, the façade of celebrity status is held on to in the same way. Whilst the celebrity is focused on by society the image remains clear, but as time progresses, the number of images of such celebrity flashing before the eyes of the viewer begins to dwindle. Over time, that celebrity’s image might fade, but pieces will always remain. Those pieces, like long-term memories, are preserved in the mind and in these paintings which thusly help keep the supports of our society alive within the mind.

“Expanded Perception” was began this year, specifically for Art Basel, to gain a deeper understanding within multi-planed works of art and the effects of psychedelic color combinations would have on the subject. Each of these works are multiple layers, with some having as many as ten, or others having as few as four. Within each layer, a meticulous amount of paint is added to the resin coats and through the usage of a size 0 or 00 brush, it is very carefully added to the wood panel or resin to keep the shape that was created from diverging out of its boundaries within my own imagination. Much like all my works, these works are part of the “op art” movement that allows movement within a static piece, so the overall visual appearance is more kinetic in nature. Without stepping into too much detail along the process, each of these works take, at minimum, weeks to create, no matter the size. Each layer of paint takes at minimum a day to complete, then each layer of resin takes three days to fully cure to add the next layer of paint on top of it. Much like the works of Jackson Pollock, the environment of the artist is added within each layer of paint, so you will find spills, mistakes, dust, flora or anything of the like that was part of my daily ritual, all by chance, but left in place as the art is created in its realist form, that of which holds a piece of the artists’ life within every layer.