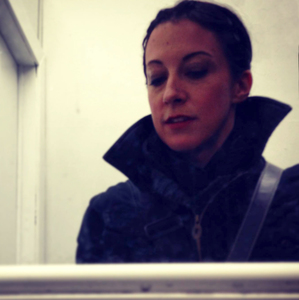 Rani Young is a Chicago-based visual artist. The recipient of a 2014 Individual Artist Grant from the Chicago Department of Cultural Affairs, she has a BFA from Colorado State University and a Post-Baccalaureate from The School of the Art Institute of Chicago. Rani has also been the lead singer in the band Girl Detective, where she brought in elements of video, costuming and object design. When not in her studio painting, she works as a freelance graphic designer and motion graphics artist (see examples here) and continues to work in music and video with various collaborators.

My paintings and drawings commonly feature characters caught in moments—usually moments of contemplation or of suspended motion. Born on Halloween, I have always been drawn to the idea of becoming a character, and have often utilized self-portraiture as a way of changing costume, or changing into an altered or amplified version of myself. On the canvas or the paper, I stage my characters within simply suggested narratives, and I invite the viewer to construct their own interpretation of the storylines that seem about to be played out. My influences include Degas’s early portraits that set up psychological intrigue, Manet’s depictions of costume and form, and Van Gogh’s premise that all subject matter is figurative, even nature. Moving into the past century, I have been influenced by Man Ray’s monotype prints and Elizabeth Peyton’s romanticized contemporary portraiture and use of bold, simplified color fields.