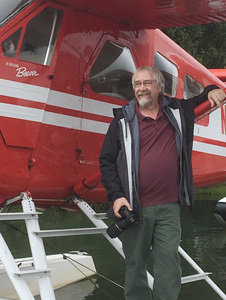 Among the earliest digital artists, photographer Peter J. Sucy added the computer to his artistic toolbox with the purchase of one of the first Macintosh computers in 1984. He began digitizing his photos the following year with a single element ThunderScan scanner which replaced the ribbon cartridge in his ImageWriter printer.

In 1986, Peter became one of the original members of Kodak’s fledgling electronics group, the Electronic Photography Division, which was an analog video based effort at the time. Realizing the coming convergence of computing and photography before many, Peter used his Mac and the new desktop publishing tools, such as Adobe Illustrator and Aldus Pagemaker, to share his vision of a digital future for photography.
(Read more in his Personal History of Digital at http://www.peterjsucy.com/DigHist.htm)

Peter designed and helped develop a number of the first digital products that Kodak would ship. An author of a Kodak patent that is used daily by billions, in digital cameras and cell phone cameras. His patent covers the generation of a low res thumbnail image (seen in your viewfinder or on your phone’s screen) and the multi-resolution image file format pairing it with the high resolution image. In 1989, Peter was asked to draft Kodak’s first digital product strategy. The same year he conceived the first digital imaging training facility, which would become known as the Center for Creative Imaging in Camden, Maine.

Around this same time, inspired by Pixar’s new films, Peter began exploring 3D modeling/animation tools, adding to his growing toolbox. Initially using this software to create 3D elements he could add to his photographs, and later creating entire 3D scenes.

In 1998, this interest led to a consulting gig with Kodak’s new lenticular imaging group, Dynamic Imaging. There he pioneered 3D modeling and photography techniques for lenticular imaging, as well as creating 3D modeled lenticular images for clients such as Disney, Pfizer and Martell Liquor. He’d finally discovered the output medium he’d been looking for.

Offering to take a buyout after Dynamic Imaging was closed in 2001, Peter launched a new career as a 3D digital artist. In 2012, he began showing the first of his 3D works as 3D lenticular backlit transparencies. Each mounted in custom acrylic and Corian™ LED backlight displays, which he designed.