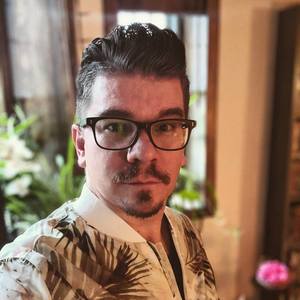 Nathan Cole is best known for his intricate and realistic portraits of highly expressive animals on scratchboard.

Nathan Cole is an artist, photographer, and writer working out of Toronto, Canada. A graduate of the Honours BFA program from Western University in London, Ontario in 2003, Nathan is now emerging as a professional artist after rediscovering the scratchboard medium in 2013. He is best known for his intricate and emotional portraits of highly expressive animals on scratchboard. He carefully uses negative space and the starkness of black-and-white to create engaging chiaroscuro compositions, sometimes playful, sometimes profound. The intensity and diversity of the lines created with the quill depict colour, texture, and depth all at once. The combination of wildlife and domestic animal portraits is meant to create a commonality between the two, asking whether one has more inherent value than the other.

Before re-dedicating himself to art, Nathan fell into a long bout of deep depression and severe anxiety. His body had long given him signs that something was deeply wrong with the corporate lifestyle he was living, but it finally plunged him into a full breakdown when no course correction was made. After giving his body and mind time to recover, he then found venturing once more into nature proved to be an anchor, a way to keep grounded but also bring back purpose. "Rewilding is a term used in the field of nature conservancy that refers to the practice of allowing land to return to its natural state in order to restore, repair and rebalance ecosystems previously under threat," explains Lisa B. Nelson, MD, Director of Medical Education at Kripalu Center for Yoga & Health."Rewilding in human terms is a reminder to return to our natural state, prioritizing the needs and real-life resources we’ve evolved to rely on over the past 250,000 years. It's a way for us to restore and repair ourselves too."

Part of his artistic approach then became a path of rewilding the self, as he explores this concept in nature and creativity. As we progress through life, our childhood exuberance and excitement for things tend to fade as duty and responsibility take over. But these survival mechanisms take their toll on us through a loss of health and enthusiasm, and we turn to coping mechanisms that may increase our unhealthiness. As he explores nature, Nathan is searching out animals and wild places in hopes of incorporating bits of what he learns into himself, to rewild his mindset. Creating wildlife artwork has become both a healing process and an avenue of learning, creating life out of the darkness of the scratchboard surface.

Nathan attended the Mauser EcoHouse artist residency in Costa Rica after winning the Nanci Christopher photography grant and will soon be participating in the Farm Studio residency in Andore, Rajasthan, India. He has exhibited his work at the Super Wonder Gallery, Queen West Art Crawl, Beaux Arts Brampton, Whitevale Arts and Culture Centre, as well as being published in Murze Magazine.

Scratchboard, by its very construction and purpose, is a very fragile medium - you create by taking away and any missed stroke could ruin what you have created so far.  Humanity and its relation to nature is quite similar. Humans create their society by taking away, cutting down and stripping the resources to create their cities and culture. Their impact on the wildlife and habitats around them is deeply affected by this process, but also in how they build their culture, the stories told and myths created. The perception of particular animals due to their place in history can very well determine their livelihood. Are the animals viewed as a threat to humans, are they treasured for their fur or meat, do they have mythic properties on the black market, or are they perceived as a pest to be rid of? Does your pet have more inherent value than a wild creature? Creating expressive animal portraits with scratchboard creates a tenuous relationship between viewer and creature, where historical and cultural perceptions can deeply affect how they see the animal in front of them. The painstaking and slow process of creating the art is echoed by the careful approach that must be taken for examining some of the myths and perceptions of these wondrous animals and how that may affect conservation efforts. In this way I hope that by creating art, I can improve the relationships of humans and the cities they live in to the wildlife surrounding them.