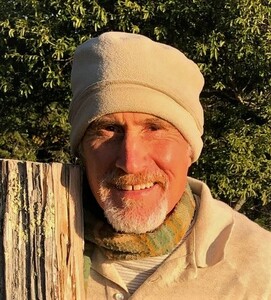 Born and raised in Chicago, Michael studied painting at Rhode Island School of Design and earned a Bachelor of Fine Arts Degree from The School of the Art Institute of Chicago in 1977.

He began showing his work through Nancy Lurie Gallery in Chicago in 1980. During the ensuing years he exhibited widely in various venues including the Museum of Contemporary Art/ Chicago, Randolph Street Gallery, Chicago, The Art Institute of Chicago, The Indianapolis Museum of Art, and the Center d'Art Contemporain, Geneva, Switzerland.

His early work was influenced by the Chicago Imagist movement, German Expressionism and early Modernism. This work evolved into a more representational mode influenced by American Ashcan artists of the 1930's / 40's and his inner city environs. Michael continued to show his work through Phyllis Kind Gallery in Chicago and New York into 1989. In the same year he established his own decorative arts studio in Chicago.

In 1993, Michael relocated from Chicago to a nature preserve in Laporte, Indiana and opened his studio in Three Oaks, MI. In 1998 he executed two large historical murals for the U.S. Post Office in Rolling Prairie, Indiana. His growing interest in eastern spirituality and art as a healing modality led him to begin facilitating intuitive painting workshops in 2004 and this had a direct impact on his own work.

In 2011 Michael migrated to Sebastopol, California. That year he participated in the annual creativity and meditation intensive at Spirit Rock Meditation Center led by Barbara Kaufman and others. In 2017 he exhibited his paintings at the Science and Non Duality Conference (SAND) in San Jose, Ca.

His classes 'Process Painting and Somatic Inquiry', and 'Mixed Media Composting Circle' were featured at the Sebastopol Center for the Arts and the Petaluma Arts Center until the Covid pandemic arrived. Since then he has been offering his unique blend of art appreciation, meditation and intuitive creativity though his weekly online classes called 'Mystic Art Circle'.

His studio is in Sebastopol Ca.

Contact him for information about classes and archival reproductions of his work.

As a fine artist who has been teaching process creativity for years my work has been influenced by the spiritual ideals embedded in this pure quest for individuation through art making. In my work I seek to integrate formal concerns with the abandon of a somatic based expression.

For me the beauty of painting resides in the meaning intrinsic to every mark, form and color relationship. When formal qualities harmonize and there is feeling (or content) the painting by itself creates an archetypal field beyond space and time. Filtered through memory the subjects of contemplation, dance with the rhythms of heart and hand, evoking a larger sphere of existence.

I make paintings, drawings and mixed media works in a variety of stylistic approaches and see myself in a tradition of art making based in direct perception, sensation and imagination as opposed to conceptually based work.

Wandering, remaining open and finding rather than willing is central to the sense of discovery that informs my work. As I grow older I find my capacity to listen to the whispers of the intuitive body/mind deepens. Embodied practices like dance, yoga, qi gong, and meditation, inspire and inform my creative practice. I celebrate the tradition of artist as mystic whose work expresses essential qualities of being, channeled through soul and imagination.