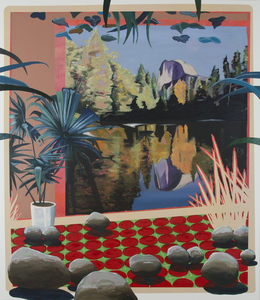 Mathew Tucker’s paintings have been selected and shown at various galleries, art spaces and exhibitions throughout Ireland and since moving to New York in 2014 his work has been published in a number of international magazines and online publications. His work is in the public collection of IT Sligo in Ireland and is in numerous private collections in Ireland, the UK, The Netherlands and the USA.

Mathew was born In Harpenden, Hertfordshire, on the fringes of London in The United Kingdom where he lived with his sister and parents until the age of two. He was then brought up and educated in Abu Dhabi, Qatar, Bahrain, St. Lucia and England as his family moved around due to the nature of his father's work.

Mathew first studied Art and Design at West Surrey College of Art and Design and later at London College of Printing (London Institute). He then lived and worked in London for 10 years before moving to Ireland in 2006 to study for a BA (Hons) degree in Fine Art at Sligo Institute of Technology. In 2014 Mathew moved to New York City to study an MFA at Hunter College as a painter, graduating in May 2016, he continues his artistic practice at his Redhook studio in Brooklyn, New York where he lives and works.

Painting is a little like solving a puzzle or working through a thought that is just on the tip of my tongue, It becomes a way of investigating and mapping out my ideas, experiences and surroundings. Much of my early life was spent traveling through different countries and changing landscapes so I developed an interest in understanding my own sense of place, this has become a common theme in my work but I consider my over arching subject matter to be about image making, looking and seeing.

My paintings highlight the formal, structural, compositional elements of the painted image and are reflexive of the process involved. By focusing on these component parts and moving between flatness, depth and illusion the paintings are able to transcend the content of the imagery and so become ‘meta-paintings’ ; paintings about painting and the experience of seeing.