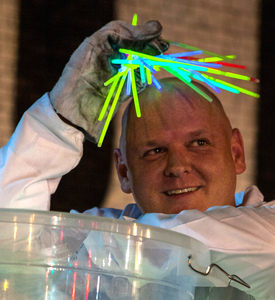 Johannesburg based artist, cultural activist and producer, Marcus Neustetter, reflects critically and playfully on his context through his art and collaborative projects. His strategy has been to pro-actively create, play and experiment to build opportunities and experiences that investigate, reflect and provoke. Mostly process driven, his production of art at the intersection of art, science and technology has led him to work in a multi-disciplinary approach from conventional drawings to permanent and temporary site specific installations, mobile and virtual interventions and socially engaged projects internationally.

Born in Johannesburg, South Africa, on the 14 November 1976, Marcus Neustetter attended the Deutsche Schule zu Johannesburg from 1982 to 1994. He read for his Bachelor of Arts in Fine Arts at the University of the Witwatersrand, earning his Masters Degree in 2001. During this time he launched sanman (Southern African New Media Art Network). In the past 10 years Marcus Neustetter has been consistently producing and exhibiting art and, in partnership with Stephen Hobbs, has been active with The Gallery Premises, The Trinity Session and in their collaborative capacity as Hobbs/Neustetter (www.onair.co.za ).

- Artistic Director: International Symposium on Electronic Art 2018, Durban
- Adjunct Professor: Nelson Mandela University, Faculty of Arts, Port Elizabeth
- Winner of the World Technology Award for the Arts 2015 (New York City)
- Artist in Research Fellowship for the Smithsonian National Museums of African Art and Air and Space (Washington DC)
- A commissioned public performance for the UNESCO International year of Light (Merida, Mexico)
- A commission as The Trinity Session by the Ars Electronica Festival in response to the current refugee challenges in Europe with their project Renaming the City (Linz, Austria) and for the SUD Triennial in Douala (Cameroon) in 2015 and 2018.