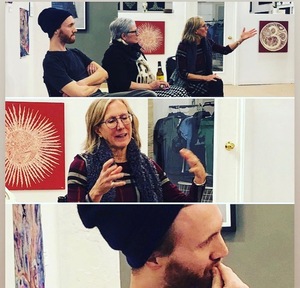 I love paint. I paint with oil and cold wax in a studio overlooking Lake Michigan.

Mara is a UW Milwaukee graduate with a BFA in Painting and Drawing. She earned her teaching certificate as an Art Educator from UW-Green Bay and received a Master of Arts in Education from Lesley University. Some of her early influences as an artist included instruction and vision from Leslie Vansen, Adolph Rosenblatt, Tom Uttecht, Bill Williams and Laurence Rathsack. Instructors at UW-Milwaukee.

Mara’s current studio is in her home with a view of lake Michigan, her muse. She recently retired from a 24 year career teaching art at Ashwaubenon High School. Mara has a long history as a painter. Her early memories include a figurative painting in 7th grade. As an undergrad in Milwaukee, Mara and artist friends ran a pop up gallery space called Verge. They caught the attention of local media and were covered in the press on several occasions. Exhibits at Verge were exciting happenings and included input from local artists of all kinds. After leaving Milwaukee Mara spent some time in the Brooklyn NY in an up and coming neighborhood called Dumbo. Here, with some of the artist’s from Verge and the addition of new friends she continued painting and participation with the alternative arts scene during the late 1980’s.

Following the birth of twin sons she and her family moved back to Wisconsin to the Green Bay area so they could raise their boys and pursue careers in education. During this time Mara continued to paint and make connections in the art community in Green Bay. As a recent retiree Mara is excited to be able to pursue her painting at a professional level. In 2017 she participated in a number of juried exhibitions and began teaching at Bay College as an adjunct instructor. Mara is currently represented by Cappaert Contemporary in Egg Harbor, WI. and The District Gallery in Knoxville, TN.

Mara’s loves painting. She works in cold wax and oil and a variety of mixed media including r&f pigment sticks and oil pastels, dye stain, artgraph and more. Each painting has its own unique story whether it is one of humor or tension, real or imagined. Mara’s abstract paintings incorporate symbols like coffee cups, cakes or cactus, table settings as well as other shapes. Mara sometimes thinks of the paint itself as the actual subject matter causing the use of color to evolve from the painting process. While the objects often have clean cut boundaries they are not really recognizable for the role they are playing.