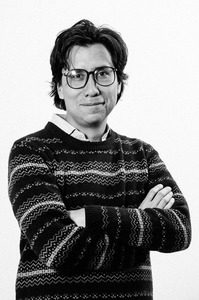 Artist from the Universidad de los Andes with emphasis on Electronic Media, M1 in History and Theory of Modern and Contemporary Art and a Masters (M2) in Technology and Aesthetics of Electronic Arts. He participated as an associated researcher in the "Documents of the 20th Century Latin American and Latino Art Project”; coordinated by the International Center for the Arts of the Americas, registered office of the Museum of Fine Arts in Houston, Texas (USA). His research focuses on creation and construction of memory at different levels, going from the individual to the collective, exploring Colombia’s National History and media art. In this sense his work seeks to point out the different relationships where the "average" is evidenced as a vital element for the construction of discourse.

His work has been exhibited in several shows in Museums and Galleries in Bogotá, Manizales, Medellin, Buenos Aires, Ciudad Juaréz, Berlin and Madrid. He has contributed to publications such as Errata#, Astrolabio and Cronopio Magazine, and has been invited as a lecturer and a workshop leader at institutions such as MAMBO and events such as the International Image Festival and Isea - conducted by the University of Caldas and Plataforma Bogota.

He has been awarded nationally and internationally within the framework of the Fundación Gilberto Alzate Avendaño`s Young talents Show 2015, the First Call for Electronic Arts sponsored by the Outsiders Art Foundation in Madrid, in the JustMad6 Art Fair and the Feria del Millón ´s Argos Excelence Award.

The construction of memory within a society allows us to understand how this element is defined and how the future is built. Thus, within my artistic practice I find significant and relevant to explore the discourse built around the identity of my country and the ideal of the nation; an element that I believe must still be explored and articulated in order to configure an identity that is bound to the political. In this sense, my work uses a series of elements that seek to generate metaphors that allow me to propose reflections around History and the specific Narrative that defines Colombia as a Nation, acknowledging an articulation in this particular discourse and recent History.

Using materials such as wood, electrical and electronic elements - such as motors and printers on media such as paper - I generate installations that allow me to propose works whose central interest is to remember through simple repetitive actions that question elements linked to national and individual identity of the public.

In that sense, I seek to controvert the National Imaginary, to generate tension from specific points in History, composing experiences that allow the public to think on their present and how to build the future.