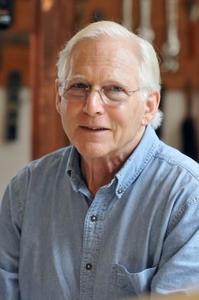 ARTWORK ON THIS WEBSITE IS ONE-OF-A-KIND, AUTHENTIC AND ORIGINAL WORK. ALL COPYRIGHT & REPRODUCTION RIGHTS ARE RESERVED BY THE ARTIST, JOE GITTERMAN.

Joe is an American sculptor. Born in New York, Joe attended the Dalton School and Westminster School, University of Virginia, and Columbia University. He continued his studies at the New School, The Art Students League, and the Pratt Institute. Joe’s 30-year career on Wall Street included private banking internships in London, Cologne, and Paris and brokerage training in Brussels and New York. Joe started sculpting as a hobby in 1969 yet it wasn’t until he retired from Wall Street that he dedicated himself to the full-time pursuit of making art.

Since his first exhibition at a local Connecticut gallery in 2011, Joe’s career has catapulted. He has received commissions from Robert Couturier, Norwegian Cruise Lines, The Riverside Building in London, the Four Seasons Hotel in Houston, and the Robert A.M. Stern-designed Arris building in Washington, D.C., among others. Joe’s sculptures are in numerous private and corporate collections in the United States, Europe, and Australia.

Joe Gitterman creates abstract sculptures inspired by movement such as ballet and modern dance. Gitterman states, “I thought about the movements of the dancers as a series of frames in an old celluloid film, and how just one of those frames could convey a fantastic sense of motion. I thought that capturing this ‘single frame of motion’ in a solid piece of sculpture would be a wonderful challenge. For me, movement is the breath of life: it releases the power, or subtlety, of any form in repose - the promise of action. My sculpture examines the relationship between fixed form and movement: each sculpture attempts to suggest the transformation that is possible."

Sculpting models in copper, wax, or acrylic, Gitterman chooses to cast in bronze or fabricate in stainless steel. The surface texture and color of each piece accentuate features such as sensual form or the suggestion of dynamic movement. Whether rendered in clean, crisp stainless steel, vibrant color, or the leathery patina of bronze, each abstraction and gesture references the fluidity of form and motion. Gitterman does not make editions thus each of his works is an original. Similar works in a variety of materials, colors, and finishes may be commissioned with custom bases.