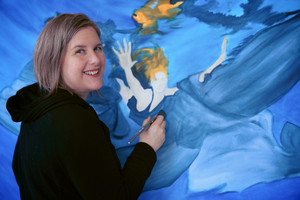 Jill Cooper, a Newfoundlander raised Nova Scotia resident, has never strayed far from the water. She is a graduate of Dalhousie University (TUNS) in Halifax with a Masters of Architecture, had a career doing set design for film/tv in Toronto, and was owner of an art gallery in Chicago.

She has had art shows in Chicago, Halifax, Dartmouth, Bridgewater, Mahone Bay, and Petite Riviere. Her medium is primarily oil paints and, more often than not, features strong elements of women and water.

I am an oil painter with a focus on looking toward the future. As a woman who was raised at the edge of the sea, my vision ranges from sweeping ocean horizons to more thematic ideas about progress, such as feminism, climate, and immigration. My colourful work captures the energy, movement, and intensity of our ever-shifting world and the women in it. I am a self-taught painter and, just like the world and people I portray, my painting is always growing and evolving into something new.