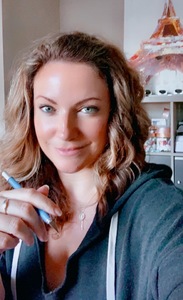 Jennifer Kay is an artist currently based in Minnesota. She focuses on highly-detailed and evocative portraiture in scratchboard.

I’ve done many things, lived a lot of places, had many jobs. Though I loved art since very little (I would draw the animals I saw in National Geographic magazines for fun), the possibility of ever working as an artist didn't exist in my head until I was deep into vet school.

Yes, I’m trained as a veterinarian (UW-SVM, Madison) and in marine biology (Boston University). Somehow I acquired a deep love of all things water growing up in the Colorado mountains and desert. While working with the marine mammals at the Shedd Aquarium in Chicago after graduating from BU, I started to think about veterinary medicine and within a couple years, I was at the vet school in Wisconsin.

My 3rd year, I started having night sweats; I woke up thinking someone had dumped a bucket of water on me. And they became worse. After finally telling my father, he said, “There’s something you’re not acknowledging to yourself.” What? No,I feel fine! But I started noticing how every time an instructor said, “When you’re out one day in your small animal clinic…”, I became nauseous. I was three years in, with much tuition already invested -- and I had to face that this was not what I wanted to do. I loved medicine, loved science, always have. But something wasn’t right. I didn’t know what to do about it, so I got my DVM, and passed my boards.

By some grace, I had instructors and mentors at the vet school that encouraged me to look into scientific and medical illustration. All of a sudden, the thing I had been doing since I was little, drawing, was going to marry with those last 4 years of intense study. After art school (UC-Santa Cruz), I started my own business, and had an amazing beginning (some of that work can still be seen on my yet-to-be-updated website). I then lost my business in the 2008 recession -- the darkest time of my life.

I’ve been married (what brought me to Minnesota), had a little boy, been divorced, and reinvigorated my art career down a whole other avenue, one I never could have foreseen… and that I adore. My first scratchboard pet portrait was accepted into the Minnesota State Fair's Art Show in 2016, and I've had continual commissions since then.

Though private commissions will continue for some time, I am now venturing into larger works to be made available for sale as limited- and open-edition prints; these creations have been a dream for some time, and I'm incredibly excited to be stepping into it.

During my years in veterinary school, I found a passion for connecting not only with animals but also with the hearts and emotions of their owners and families. Now, through private commissions, I find immense joy in the connections I have with these families in a whole other way -- entrusted not only with the stories of how their animals came to be in their lives, but also the depth of love that is present. There is a soul connection I hope to portray in every portrait I create of someone's animal -- these beings often see us in moments of our lives that few other humans ever do, and they gift us with unconditional love and acceptance.

As I now venture into larger works of art, I want to bring dignity to the soul and spirit of a variety of wildlife, as well as our own deep and individual human connections with them. I have worked with people for 25+ years, in a variety of ways, who have trusted me with how much they deeply relate to the animals around them -- often stories they won’t share with others. The truth is that we as modern human beings have felt separated from the natural world for generations, and it's clear it has a negative impact on our mental, physical and emotional health. It's my own deep belief that any conversation or artwork that brings to light how many of us feel a connection to that world is one worthy of existing -- it helps us to understand how we're all connected. Not just to the earth, but to each other as people, and that we have many of the same experiences.

All artwork and images (originals and prints) ©Jennifer Kay, and may not be reproduced or used without permission (feel free to contact her for inquiries or requests for such use). Any copyright infringement will be pursued.