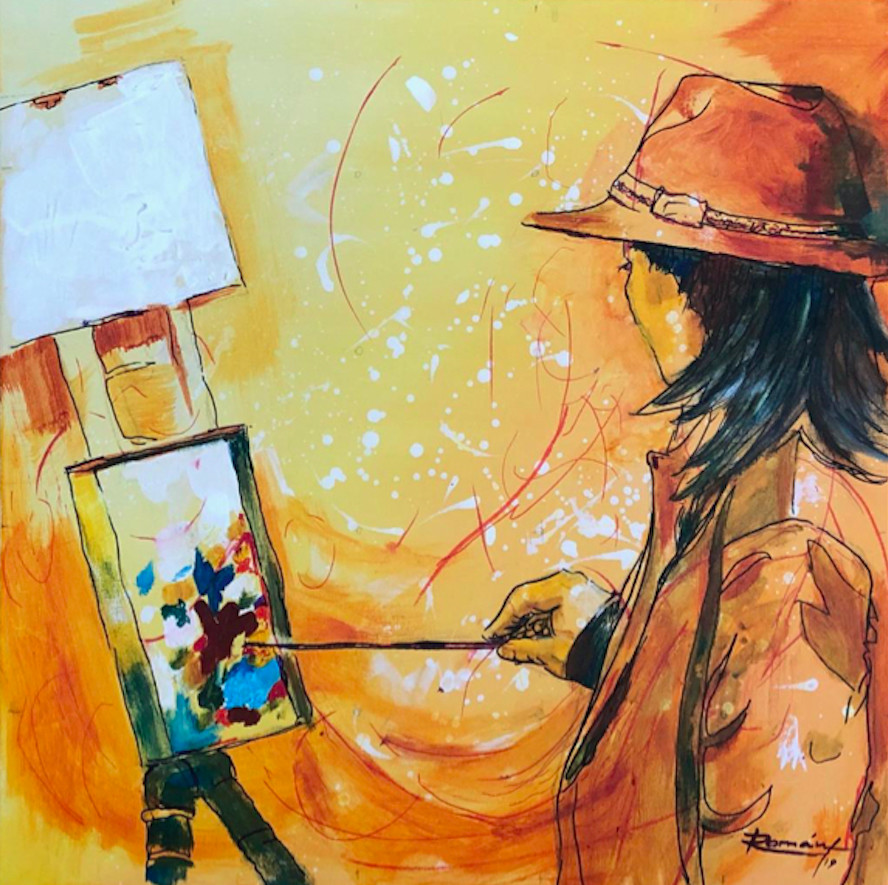 Jeannina Blanco's relationship with art starts at an early age in Costa Rica drawing animals and making collages in her teenage. In 1988 moves to California where inspired by impressionists artists around her, she takes the hobby of painting in 1996. In 1998 "Art finds her”, during her recovery from brain surgery as she heals and straightens her brain with the help of painting. She decides to switch careers from computer networking to painting and takes a significant workshop with Hedi Moran at Scottsdale Artists School in Arizona, which changes her approach to alla prima painting and will inspire her to teach later on. Blanco has a prolific and successful starting career as a painter in the Cannery Village, an antiques and artists street in Newport Beach. Her main subject to paint is the human figure but also enjoys still life and animal portraits. In 2000 is published in the Orange County section of Los Angeles Times in 2000 and The Artist’s Blue Book. Finds Pleinair through the Southern California Plein Air Painters Association and then joins the California Art Club and launches her website ArtBlanco.com. In 2002, moves back to Costa Rica where her work starts to show strong colours and textures from the Latin culture and the subjects she finds in the Costarican landscape. She opens her own art gallery, art school and framing shop called Arte Blanco in Escazú and starts her mural business under the tutelage of Ohio faux finish artist Elizabeth Ashford. Between 2006 and 2009 produces and directs a 50-minute video documentary about the origins of the theatre movement in Costa Rica and paints a series of 12 portraits, and receives the Declaration of Cultural Interest by the Costarican government. In 2009 exhibits at Salmagundi Club New York the portrait of famous Costarican actress Ana Poltronieri and in the same year is accepted as a non-local patron member at the said organization. Also participates in art fairs in Pennsylvania. In 2012 establishes the group Plein Air Costa Rica with fellow painters, which becomes the association in 2020 and she presides until the present. In 2019 Plein Air Costa Rica receives the Declaration of Cultural Interest by the Costarican government for the 40 Artists Cultural-Artistic Exchange with Plein air artists of Poland. Blanco has been exhibited solo and collectively in galleries and art fairs in the United States, France, Poland, Argentina, Ecuador and Costa Rica, and has belonged to other regional and international art associations such as the International Art Association IAA and the Costarican Visual Artists Association. Blanco´s artwork has won recognition and consists of hundreds of paintings, drawings, murals, photographs and documentary, is collected in different countries and has been auctioned and published in book covers, music CD covers, newspapers and magazines and she has also been invited several times to radio. TV cultural interviews and as a juror in exhibitions in Costa Rica. Her latest works can be found at ArtBlanco.com.

I did not choose to be an artist, Art chose me. It found me, healed me and gave me a great reason to live. To me, Art is an act of love!