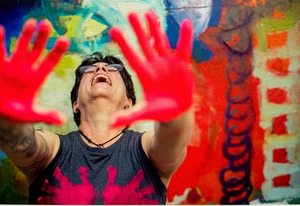 I was born in 1962. In 1966 I was given a crayon. It all went to hell from there. Seriously, I was raised in New England by fairly normal parents who did their best. Art school was not in the cards for me coming from a family of modest means, but I was that kid who walked around the outside of the house leaving a trail with a purple crayon and the one who drew under my mother’s coffee table. She says now that she wishes she still had that coffee table.

It would have been cruel to my soul not to be an artist.

I sketched a lot growing up and took some small college fine art classes. I was told I had real talent. I was also told that artists can’t make a living making art and I believed that part of the story, at least for a long time.

Eventually I became a photographer thinking, since I loved people and it seemed like something I could make a living at, it would be a good alternative. I was right and I did and it was…for a while. I owned and operated a highly successful studio for thirteen years.

At some point I began to feel unrest in my heart. I needed to return to painting. There was a fire that would not go out. It really was my first love. In 2006, I had my first solo show and sold my very first piece. My presence grew in my local and regional community. Things were going well.

In 2009, life took another turn and I moved to Raleigh, North Carolina. This was a real turning point for my art and my career. I lost my tribe. I lost my footing. I then made a monumental decision. I announced to myself and the world that I would make a run for it as a nationally recognized artist.

I’ve been featured in several articles and magazines including landing on the cover of Art Business News as one of the top fifty artists to watch (I’m proud of that…so is my mom). I am now internationally collected and recognized in over five countries.

Here’s where I’m supposed to tell you what moves me to paint. It’s generally called an “artist statement.” It’s my big why...why I paint what I paint and maybe how I paint.

My work is inspired by life…the us that is us….and by a deep calling to delve deeply into my emotions. I’m drenched with the desire to find a way to share what I feel on the canvas, taking the intangible parts of our humanness and making them tangible.

I paint in abstraction (big art word) often, but not always, depicting the human form in whimsical or dreamy ways. My art is often described as moving or emotional, deep and thoughtful, inspirational and even transformational.

I call myself a bold colorist which means color is my language and I use it to translate my feelings. I work very quickly and intuitively, reacting to each stroke as if the canvas is speaking to me directly. I paint layer after layer sometimes exposing what is underneath in order to create portals of light and mystery. I paint mostly with my hands although I have an arsenal of tools at my disposal. I love texture and find ways to create unusual surfaces.

I was sharing my dilemma once with my sister about writing the artist statement and how hard it can be to translate what I do into words….in her infinite wisdom…she quietly said…

“In the end all people really need to know is that they love it.”

I think she is right.