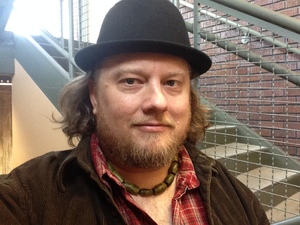 James Joel Holmes creates artworks that attempt to depict the interconnectedness of all living and mechanical things.

Born in 1974, James grew up on a small farm in Vernal, Utah where he used to build clubhouses, play in large open fields and abandoned barns, and go foraging for wild asparagus with grandma.

His family moved to Salt Lake City when he was about 10 years old, where he lives now.

He spent many years working in print shops and eventually found his way into graphic design, audio/video production, photography, and animation.

In recent years James rediscovered a core passion for painting and drawing in a variety of styles. He’s been painting obsessively ever since.