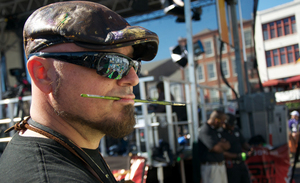 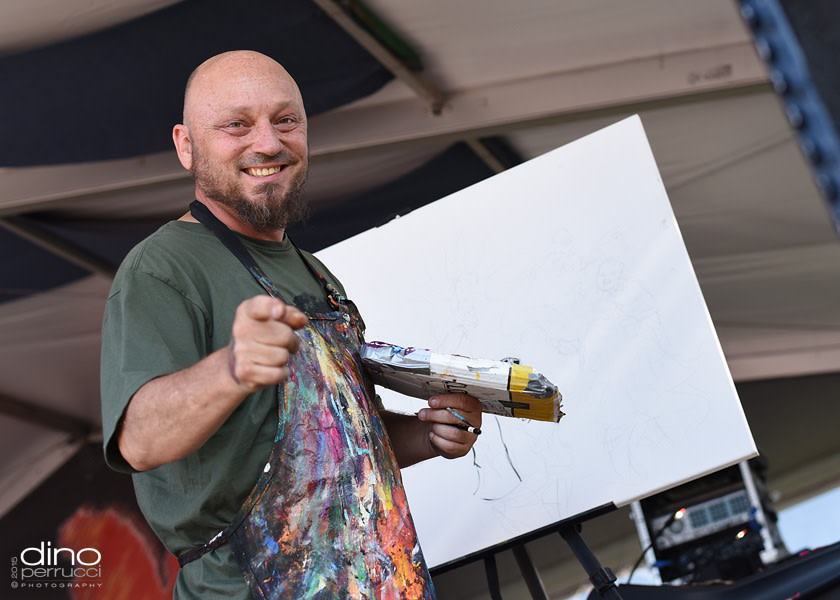 FRENCHY PAINTS WITH SOUL AND CELEBRATION

as he travels the world capturing live music performances, festivals, fundraisers and sporting events with style and finesse. From his palette comes vibrantly colored brush strokes inspired by rhythms and melodies, giving emotions a shape in real time. His vivid, energetic pieces captivate art collectors, sports fans and music lovers alike, as if they had the best seat in the house. Based in the talent-rich city of New Orleans, Frenchy is an ambassador to the arts and a bastion of creativity.

Born to a boxer and a saint on August 16th, 1970, in the industrial New England town of Lowell, Mass., Randy Leo Frechette -– a.k.a. Frenchy –- has been drawing since he could grip a pencil. In grade school he impressed friends with caricatures of teachers and classmates, but he did not realize his true calling until The Boston Horns approached him in Orlando and persuaded him to paint their performance live in 1994. Since then, Frenchy’s presence has filled venues both large and small with an explosion of creative spirit.

New Orleans has been his home, and his muse, since 1997, where the eclectic street and music scene continuously inspire his creative expression to new levels. Immediately immersed into the sights and sounds of New Orleans, he could be found in music clubs such as the Maple Leaf Bar almost any night of the week, mastering his “acousti-optics” with musical legends such as the Grammy Award winning ReBirth Brass Band and James and Glen Andrews with Tuba Fats in Jackson Square. Frenchy quickly became

His artistry in motion eventually garnered the attention of the New Orleans Saints, who requested Frenchy as their official team artist from 2001-2007, and the New Orleans Hornets from 2004-2006, capturing energy in paint at every home game at the Superdome sideline and arena courtside.

His regular appearances include Monday Night Football in-studio and on-field action, countless fundraisers, music events and festivals throughout the year. A lifelong dream of Frenchy’s was brought to fruition when the New Orleans Jazz & Heritage Festival committee selected Frenchy as the event’s official artist of 2015, honoring Big Chief Bo Dollis.

While much of Frenchy’s time is spent on the go and traveling the world, he takes pause for commissions and studio pieces, to spend time in his New Orleans galleries and enjoy time with his wife and son. Frenchy can often be found at his gallery at 8314 Oak Street, beside the famous Maple Leaf Bar and Jacques’imos Restaurant.