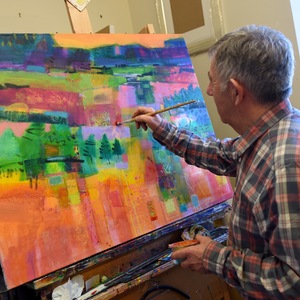 Former Head of Art at Aberdeen Grammar School, Francis Boag turned his back on a successful teaching career to become a full-time professional artist in 2001. He is now considered by many to be one of Scotland’s foremost contemporary painters, exhibiting widely at home and increasingly abroad.

Since 2001 he has had exhibitions throughout the UK and also New York, Dublin, Belfast, Paris, Munich and Seattle.

Last year his paintings were also seen in Michigan, Moscow and the French and Italian Rivieras.

He is the only Scottish artist to have cards featuring his paintings included in the Fine Art collection of UNICEF with his Christmas cards regularly being among their top sellers.

His best-selling prints have found their way into a host of public buildings such as airports and hospitals and his original work is increasingly sought after by large corporate collectors including John Lewis plc and the Royal Bank of Scotland.

His website www.francisboag.com offers a more extensive insight to the works and thoughts of this remarkable Scottish Artist