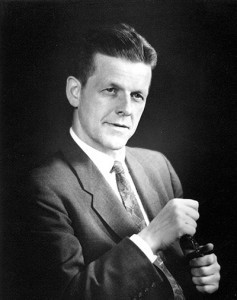 Eugene Kingman was born in Rhode Island in 1909. Throughout his early childhood and formative years in Providence, he showed an immense interest in art and science, while constantly pursuing drawing and painting as a hobby. Later Eugene studied at Yale University, where he received two degrees (in Geology and Fine Arts).

While a student at Yale, he achieved national attention with a commission from the National Park Service to paint scenes of various popular parks — seven of which were displayed at a 1931 exhibition in Paris, France. Four of these paintings (Yellowstone, Grand Teton, Crater Lake and Sequoia) are still displayed in several offices in the Department of Interior and the National Park Service in Washington, D.C, while the three other paintings (Mt. Rainier, the Grand Canyon, and Yosemite) are supposedly housed in vaults inside most of those national parks.

Kingman made a name for himself as one of the “Regionalist” American artists during the New Deal era. In the 1930s he was awarded another major commission to create spectacular murals in three US Post Offices in East Providence, RI, Hyattsville, MD, and Kemmerer, WY, which are still on display today.

Also during that decade, Kingman continued to be very drawn to nature’s wonders in the National Parks, especially the ones in the western United States. In fact, he was invited to use his combined scientific and artistic background to illustrate a geographic article in thirteen landscape paintings of Crater Lake and Yosemite National Parks, which were published in the 1937 issue of the National Geographic Magazine.

Soon after earning his Fine Arts degree at Yale, this young gifted artist taught lithography and mural painting at the Rhode Island School of Design for three years. In 1939 he married his sweetheart, Elizabeth Yelm Kingman, who had been an anthropologist and park ranger at Mesa Verde National Park. He later became the father of two daughters: Mixie Kingman Eddy and Elizabeth Anne Kingman, the grandfather of Quinlan Kingman Eddy, and great-grandfather of Ginsu and Jeena Park Eddy.

Following his marriage in 1939, Kingman and his wife moved to Tulsa, Oklahoma, where he became Director of the Philbrook Art Museum. After spending several years there, Kingman joined the Army in 1942 to serve as a cartographer for the Office of Strategic Services (OSS) in Washington, D.C. during the Second World War.

After the war ended, Kingman was then hired in 1946 to become the Director of the Joslyn Art Museum in Omaha, Nebraska, where he served for twenty-two years. During his career in Omaha, he developed his creative talents even more to become a “pioneer” in various exhibit design projects. In fact, he was invited to consult, plus design exhibits, such as ones at the Smithsonian and at several dams, sponsored by the Bureau of Reclamation and the U.S. Corps of Engineers in the Midwest. Moreover, for the first issue of the American Heritage Magazine in 1954, he was asked to write about the Midwest and the painters who had been influenced by the midwestern plains.

While working at the Joslyn Art Museum, another one of Kingman’s most noteworthy commissions happened in 1946, when he was invited by Mr. Arthur Sultzberger, Sr., CEO of the New York Times newspaper, to paint a large mural, which was displayed inside the former New York Times building for many years. Using his own skills with maps and murals and consulting with a famous American cartographer, Richard Edes Harrison, Kingman painted a vast and accurate view of the earth, a challenge since no one in the mid-1940s had ever seen what the earth looked like from space. He added a number of red dots on the map to mark important world cities, like New York, Paris, Tokyo and Omaha, his now beloved home. The mural was installed in the lobby of the New York Times in 1948, and for the next forty years Kingman’s unique artwork inspired generations of reporters, Times staff members and news-makers who came to call at the venerable newspaper. Later the New York Times took down the mural during a lobby renovation in the late 1980s, and after years in the Times archives, the mural was donated to the Joslyn Castle Trust in Omaha. After a community effort to get this inspirational mural back to Omaha, spearheaded by Maureen McCann Waldron, it arrived in May 2014, and was restored at the Ford Conservancy Center in Omaha by Kenneth Bé. Following a special unveiling celebration at Omaha’s W. Dale Clark (Main) Library in 2016, this spectacular mural now remains displayed inside the entrance of this public library. At the publisher’s request, Kingman added the lines of poetry by Susan Coolidge, which continue to be timeless and uplifting: “Every day is a fresh beginning — Every morn is the world made new.”

During Kingman’s time in Omaha, Kingman’s efforts to promote the arts in Nebraska and elsewhere earned him numerous civic awards, and other recognition, including an Honorary Doctorate from Creighton University. Many folks in Omaha recognized his immense artistic talent and commissioned him to do a number of paintings. In fact, many of these were exhibited in several of Joslyn Art Museum’s galleries as a special memorial tribute to him, following his death in 1975 in Lubbock, Texas, where he had been working as an Interim Director and Special Exhibit Design Consultant at Texas Tech University’s Museum. Thus Kingman’s paintings currently are hanging on many walls throughout the U.S — in museums, in various Department of Interior and National Park Service offices, in U.S. Post Offices, and in a number of living rooms, including the Nebraska Governor’s Mansion.

Finally, it should be mentioned that while in all the places he lived, Kingman reflected the spirit of “Plein Air” painters. That is, he felt it was important to be directly outdoors on site in the landscape while he painted or sketched, and then he often finished his artwork in his home studio. This native New Englander deeply loved the people, the scenery and the culture of not only his father’s farmland in New Hampshire and in National Parks, but also his home in Nebraska. While he was quite busy during his career as Director of the Joslyn Art Museum, he spent evenings and weekends painting in the area, fascinated by light on cornfields, water, mountains, trees, and shadows on barns. His paintings, lithographs, murals and exhibit designs all reflect his deep affection for nature in America’s Midwest, Southwest, Western States, New England, as well as in Europe, Australia and National Parks. They were acquired as prized possessions, and continue to be treasured by many.

"Art should not be isolated from everyday living experience. The ability to create - the need to express ideas, emotions, and perceptions - is part of being human, and is related to everything we do." – Eugene Kingman, 1970

"I am always looking for something new and different whenever I paint or design an exhibit." – (Mixie Kingman Eddy's Interview with Eugene for her college senior thesis, 1965)

"Everything is relative, directly and indirectly to everything else. Harmony and balance between things preserves life and beauty and peace." – (Elizabeth Anne Kingman's Interview with Eugene regarding his exhibit design projects, 1970)

“Art cannot get away from its period and time….art and history are inseparable and dependent on each other” – Eugene Kingman, 1955 (http://eugenekingman.com/)