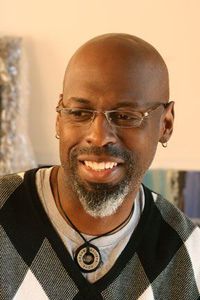 Charly Palmer was born in 1960 in Fayette, Alabama and raised in Milwaukee. He relocated to Chicago to study Art and Design at American Academy of Art and School of the Art Institute. As a graphic designer and illustrator, he has run a successful design studio with a Fortune 500 clientele. As an instructor, he teaches design and illustration and painting at the post-secondary level—most recently—Spelman College. Currently, Palmer devotes his life to his creative goals and has established himself as a fine artist of note.

In his youth, Palmer was fascinated by illustrations in Ezra Jack Keats’ The Snowy Day. “I could never get enough of the imagery in the book,” he says Keats’ work was magical and planted a seed in his young heart. What appealed to him most is the random geometric shapes, the simplicity of layered textures and patterns, and the mix of bold colors. Though inspired by Keats’, Palmer brings unique style and technique to fine art. He creates visual theatre that gleans from history and life experience.

In the recent past, Palmer worked under the pseudonym Carlos—his alter ego. Doing so allowed him to explore and experiment with spontaneity and fluidity. The result is a body of work that is less controlled and more abstract and primal. The fusion of his artistic styles has culminated into the perfect stylistic voice, which is fully expressed in his powerful Civil Rights series.

Charly Palmer’s work is in private and public collections which include Atlanta Life Insurance, McDonald’s Corporation, Miller Brewing Company, the Coca Cola Company and Vanderbilt University. His previous work His Story, belonging to the estate of Maya Angelou, was auctioned by Swann Gallery in 2015. Palmer’s work was commissioned for the 1996 Olympics and the Atlanta Convention and Visitors Bureau. In 2016, he was selected to execute original artwork commemorating Fisk University’s 150th year anniversary; in 2017, he accomplished the same for Howard University. He completed a project with the Green Bay Packers which features art for the Lambeau Stadium. Palmer recently illustrated two children's books,There's A Dragon In My Closet and Mama Africa—a children’s book chronicling the life of Miriam Makeba--for which he received the 2018 Coretta Scott King/John Steptoe New Talent Award. Palmer remains in high demand for significant commissions. He currently lives and works in Atlanta, GA.

"A love of black people. Everything I create is about the celebration of blackness, and so I look at it from different perspectives. I often pose a question opposed to necessarily having an answer. As an artist, I ask a question instead of making a statement; and that’s why it’s difficult as an artist to make an artist statement.

I think of the last body work I created as the first. I make it personal a statement. I have an AHA moment. The last idea was that I am truly an introvert — that I absolutely love being by myself most of the time, and so this work was about the shyness and navigating this world as a shy person. And how weird that might be to a person who might not get it.

So, the journey is always connected to my fascination with the black narrative, the African American story, that everything has a history or political take to it. I felt I was preaching to a choir, though, so now I focus on just how beautiful we are…"