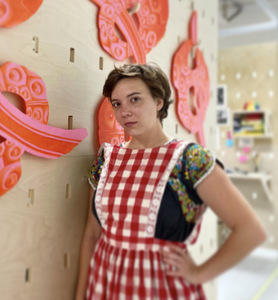 A Dallas, Texas based multi-disciplinary artist represented by Ro2 Art in Dallas and by Goetze Art & Design in Memphis, Tennessee.

Cat Rigdon is a painter and fiber artist based in Dallas, Texas. She grew up on the island of Cyprus, before the Iraq War, the island has a strong folk art and naturalism culture which is reflected in Rigdon’s work. She graduated from Texas State University in 2014 and moved to Dallas as a Decorative Arts Junior Specialist and Cataloger for Heritage Auctions. She left the auction house after a serious head injury to pursue a studio based lifestyle. Her obsessively repetitive works deal with her continuous recovery from the brain injury, the mythology of growing up on the island of Cyprus, and artifacts from being an auction catalogers.

​My work is in conversation with the ancient dig-site of Enkomi, which is located near war-torn Famagusta in the disputed Republic of Northern Cyprus. While in London this past Summer, I came across a few artifacts from this site at The British Museum. There were so many rarities including gold mouth diadems. Rude-Style ceramics, and beaked lady votives. These objects spoke of the island’s complicated past, as it is in a very strategic area of the Mediterranean, and reminded me of my childhood there. I grew up in Greek Southern Cyprus and could not enter the demilitarized UN Green Zone or the Turkish Northern territory. As a child, the North seemed to be untouchable and mythical, full of relics from a bygone era with fabulous beaches. In 1974, a violent coup d’etat divided the island between Turkish and Greek Cypriot powers, displacing the residents with many remaining missing. Many people in my community had fled from Famagusta and would share their sad tales of the beauty and history from their region. Suddenly, my family emigrated in 2003 to the USA. The whole island seemed to become an unreachable destination like the North was during my childhood years. Using the digitized records and personal images, I have been recreating the site objects in ceramics, watercolor, and with oil on custom-cut acrylic panels. Ultimately, I would be creating a representation of an Enkomi burial site while trying to feel closer to the culture I still haunt.