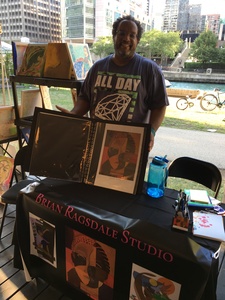 Brian L. Ragsdale PhD is a mixed media artist primarily using acrylic paints, marker, and cut paper. He became interested in art in the 5th grade when his teacher taught him about negative space. In the early 1980’s, he received his BS in fine arts and graphic design from Morgan State University in Baltimore, MD, where he was voted the Outstanding Student in Art, and worked for 15 years as a corporate and freelance graphic designer in South Norwalk, CT. Over this period, he worked with IBM, Pepsi Cola and several organizations designing logos, newsletters, brochures, and other graphics and advertisements. He was also a trained typographer and illustrator. In the late 1980s, he won an outstanding mention for a watercolor of a sailboat from an Stamford Art Club exhibition. In 2013 his mixed media painting, “Cows of Cornish” was accepted in a juried art exhibit in the Richards Library Art Center in his previous hometown of Newport, NH.

Currently, he works full time as a college administrator for a leading distance learning university. Dr. Ragsdale or Brian as he is most commonly referred to in the community and art world continues to bring his zest for learning, creativity, and organizing groups of people. In his Chicago based art studio, he works evenings and weekends, creating fine art drawings and paintings and also digital graphic art images. His latest work examines themes of African American beauty particularly women of color, how racial identity is presented in art, and art with social justice themes relating to freedom, joy, and happiness.