Anne Woelk studied painting at the University of Fine Arts Berlin-Weissensee and at the Chelsea College of Art London. She lives and works in Berlin. 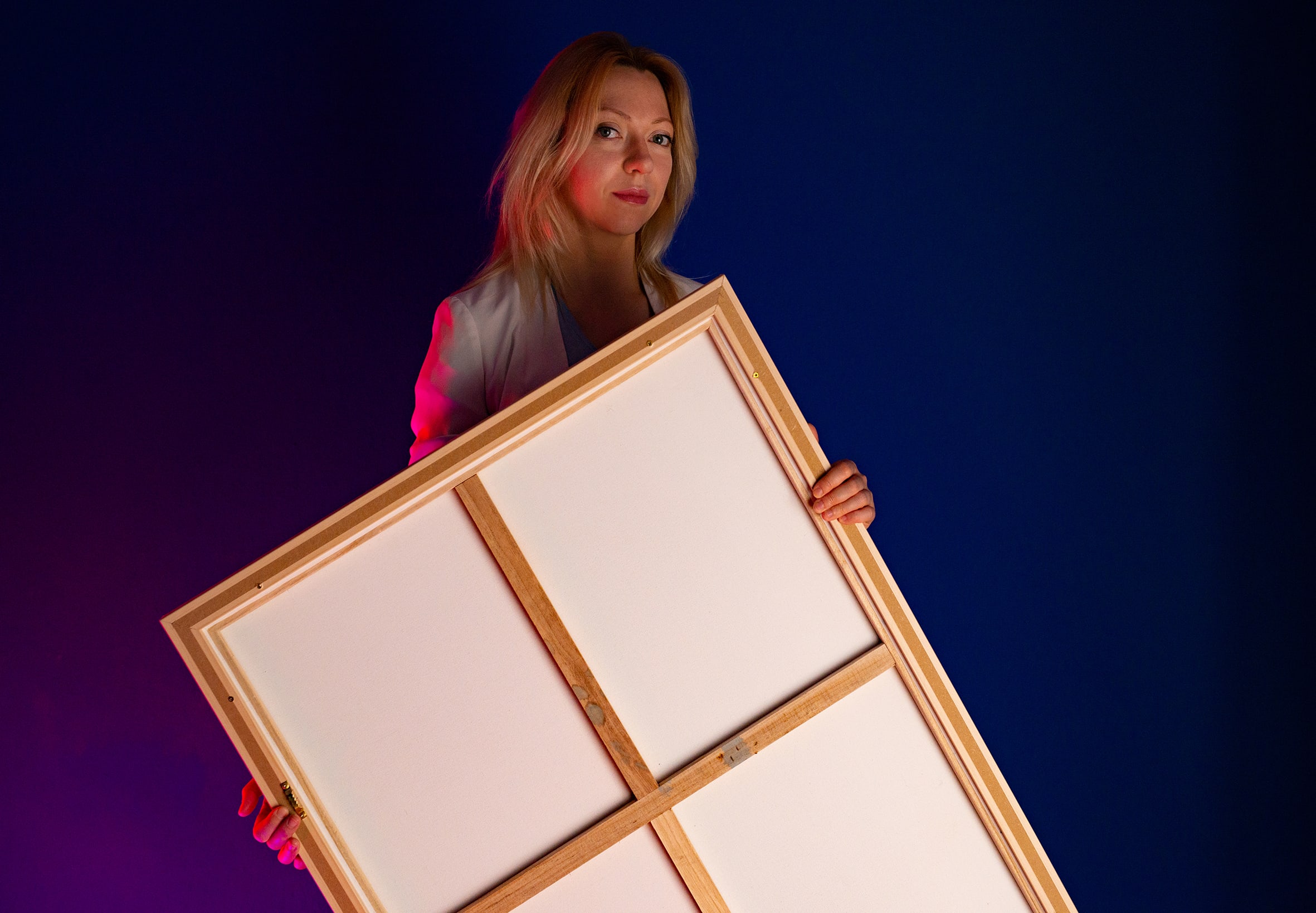 Anne Wölk (1982, Jena/Germany) was born and raised in former East Germany. She is a figurative painter whose artistic work stands in the tradition of realistic contemporary artists Vija Celmins and Russel Crotty. Committed to an attitude of reskilling, Wölk uses traditional methods and materials. Her paintings predominantly show us night sky scenes with deep and open galaxies. By quoting Spacetelescope images and digital photography resources, Anne Wölk tests the margins between art and reality.

Parts of Wölk’s family came originally from East Prussian Königsberg, modern-day Kaliningrad. Through their cultural roots and characteristics, the artist sees herself as a wanderer between different worlds of Eastern and Western culture. During her childhood, she often came into contact with paintings by Baltic and Russian landscape painters.

With her ongoing exhibition activity in the USA and her extensive exchange of ideas with American artists, Wölk’s fantastical landscapes are characterized by a multicultural character and show German, Baltic, Russian, and American elements.

In 2006, the young artist entered the international art world at the Contemporary Istanbul Art Fair, when the collector Can Elgiz bought one of her large-scale paintings for the Elgiz Museum of Contemporary Art in Istanbul. Her painting Doggirl was shown in several thematic group exhibitions next to famous artists Cindy Sherman, Tracy Emin, and Sarah Morris.

After graduating from art school in 2009, the painter became known for beautiful large-scale landscape paintings and was selected and shortlisted for several international competitions and scholarships.

Her awards include the national Studienstiftung des Deutschen Volkes scholarship; the Alpine Fellowship grant at Aldourie Castle, Scotland, UK; a residency at Bodensee Art Fund; and an artist-in-residence grant in Goriska Brda, Slovenia, awarded by the German Embassy, Ljubljana. She has exhibited at international institutions, including the Elgiz Museum of Contemporary Art, Istanbul, Turkey; the CICA Art Museum South Korea; the Zeiss-Planetarium Berlin, Germany; the Accra Goethe-Institut Ghana; and the Kyrgyz National Museum of Fine Arts, Bishkek, Kyrgyz Republik.

Wölk has exhibited her work alongside artists like Robert Rauschenberg, Johannes Wohnseifer, Azade Köker, and Stephan Balkenhol. In 2011, she was selected for the Edition S 36 of DSV Kunst Kontor, Stuttgart. The Edition S 36 was a compilation of contemporary artworks, including paintings of Jonathan Meese and Tim Eitel.

She has exhibited and sold on the international art market, including the Swab Art Fair Barcelona in Spain; Viennafair in Vienna, Austria; KIAF Seoul in South Korea; and Contemporary Istanbul in Turkey.

In October 2013, Anne Wölk won the Category Award for the ArtPrize competition ‘Art Takes Paris’, judged by directors from The Andy Warhol Museum in New York, Lisson Gallery, and the Marianne Boesky Gallery. In 2017, Wölk was announced as the Showcase Juried Winner in the painting category of the 9th Artslant Prize. Her painting ‘Virtual light’ was selected by a jury consisting of Natalia Zuluaga (Artistic Director of ArtCenter/ South Florida), Nathaniel Hitchcock (co-organizer of the Bass Museum of Art) and Malose Malahela (co-founder of Keleketa! Library). Two years later, the painter participated in the finalists’ exhibition of the art competition Art Revolution in Taipei, Taiwan.

Space is an unknown realm of intimidating mysteries, and yet, peering into the night sky provokes tranquility; these juxtaposing experiences inspired my lifelong obsession with the cosmos. My hometown, Jena, was a center for lasers and optics technology. As a child, I encountered simulations of the stellar skies and demonstrations of interplanetary travel. When I began developing my career as an artist the allure of the universe never relented. I drew upon the Eastern European masters of landscape I viewed in my youth and incorporated my passion for science fiction to create work that transports a viewer across the galaxies and touch down on the surface of fictional planets.

The work intends to simultaneously invite an escape into the vastness of space and offer a critique of the human relationship to the environment. In each work, I test the boundaries of art and reality as my innovative landscapes ignite an interplanetary wanderlust. I remix elements of modern culture, layering familiar references in new otherworldly surroundings. As my viewers position themselves amongst the stars on these new planets, they reconcile the daunting and often hostile universe with their own human nature that constantly seeks to conquer the natural world.

In the wake of the pandemic, not only have artists felt the strain on their capacity to create, but our world seeks escapes from daily life. Through my dreamlike artificial lights, rainbow colour scale of starbursts, and portrayals of the dark vacuum of space, I offer an enriching revelatory experience.

Clouds of interstellar dust, endless starscapes, and intricate systems of planets that elude the naked eye evoke a sense of solace as viewers travel through the cosmos and encounter fictional realities within my work. Through a painting practice that draws on techniques of old masters, modern technologies, and the ever changing digital culture, I create multidisciplinary paintings that question our individual relationships to the universe.

While my approach to compositions stems from Romancitcsim and Photorealism, I subvert these traditional methods of landscape painting through conceptual depictions of light and flowing colour gradients alluding to the digital photographic mediums that capture popular images of space; my works portray photographic aberrations, digital information gaps, and compression artifacts caused by the technical limitations of telescopic observations and mechanical photography. Through oils on canvas, graphite on paper, and even acrylic paints on three-dimensional styrofoam spheres, these technical elements intertwine to form my distinct visual language.

The global fascination with cosmic travel and its depictions in science fiction and popular culture led me to develop scenes that captured the might of outer space with stark contrasts to the colonizing and scientific pursuits of the human race. Observatories, LED light beams of space stations, and communities of terraforming colonies integrated into my work confronting my viewer with speculative futures. As my passion for the astronomical and our own earthly environment motivate my work, I challenge my viewer’s perspective of their place in the world we collectively inhabit.