A mirror, a dish, a window from GOLDFINCH

Through a range of media, these six artists explore the intimate landscape of interior space. From functional objects to paintings and photography, the works wend through rooms, objects, and everyday gestures, revealing the emotional and psychological resonance of domestic surroundings and the “stuff” accumulated within them. The strangeness of time, as it often exists when we are lost in thought or fall into familiar rhythms, is explored here as nonlinear, layered, and personal—measured by our private rituals, and experienced through daydreams, memories, and moments of stillness. Together, these artists ask us to consider moments of intimacy and mystery that exist within our interiors, as well as the deep ties between our inner lives and the rooms in which we spend our days.

Influenced by Gaston Bachelard’s The Poetics of Space, Zakkiyyah Najeebah Dumas-O’Neal’s photographs, made in the early days of quarantine, capture scenes of solitude, companionship, and stillness. The personal, black-and-white series speaks directly to Bachelard’s notion that “[f]or a knowledge of intimacy, localization in the spaces of our intimacy is more urgent than the determination of dates.” Through language and image, Najeebah Dumas-O’Neal’s works merge interiority and domestic space, candidly reflecting on joy, pleasure, anxiety, and the unknown.

Lesley Jackson’s poetic, functional objects take rituals that we casually perform, like brushing our teeth, lighting a candle, or taking daily medication, and slow them down, injecting such moments with care and attention. As she incorporates items salvaged from thrift shops with carefully crafted armatures, Jackson considers the symbiotic relationship between objects and methods of display. Both metaphysical and grounded, the works balance practicality and reverence, as they attempt to reconcile disconnections between our everyday things and ourselves.

James Kao’s paintings and drawings begin by studying interior space and local landscapes intently, until his eyes begin to blur and outlines morph and collapse. Kao uses the shapes of spaces between familiar things (furniture and plants, for instance) as a map from which to build a new, abstracted landscape—one that speaks to the power of slow looking and its role in understanding and imagining place.

Minami Kobayashi’s paintings capture ordinary scenes and moments, while exploring how we comprehend, and even feel tenderness toward, the minutia of daily life. Like the dichotomous relationship between inside and outside, Kobayashi considers how objects like mirrors expose a complex duality of person and image—by reflecting, fragmenting, and distorting—as she sensitively explores the interiority of her subjects.

Emily Sher’s ceramics await a dinner party. A stack of plates anticipates the low buzz of a crowded table; pasta shaped gently by hand; cheeses and flowers in vases arranged just so. Formed intimately through touch, her work is molded both through a knowledge of clay and its properties, as well as through an understanding of food and service: the pleasures of dining and of feeding people you love.

Ann Toebbe depicts intricate interiors—her own and and those of people she knows—that reveal the emotional lives present in objects and domestic spaces, even when the occupants of the rooms are absent. Through a combination of paint and paper collage, the works contain dizzyingly minute details and spatial tensions, sensations that speak to piecing together memories, and to the conflicting perspectives associated with the passing of time and its psychic weight.

CLICK ON THUMBNAIL IMAGES BELOW FOR LARGER HIGH RESOLUTION VIEWS 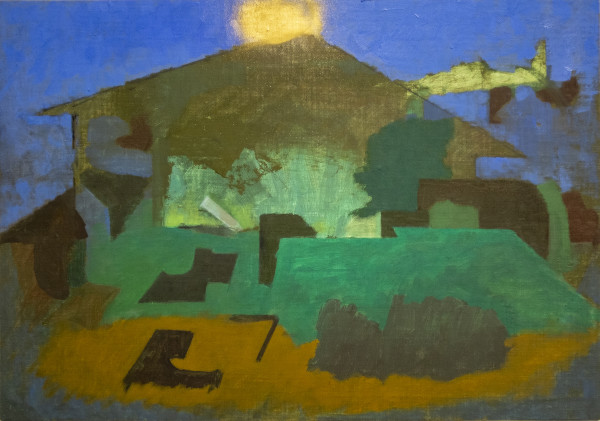 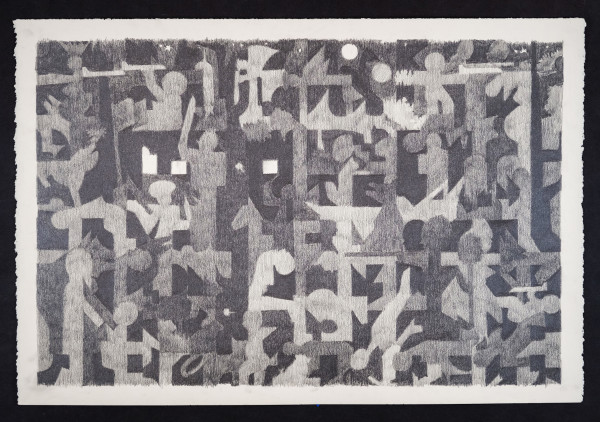 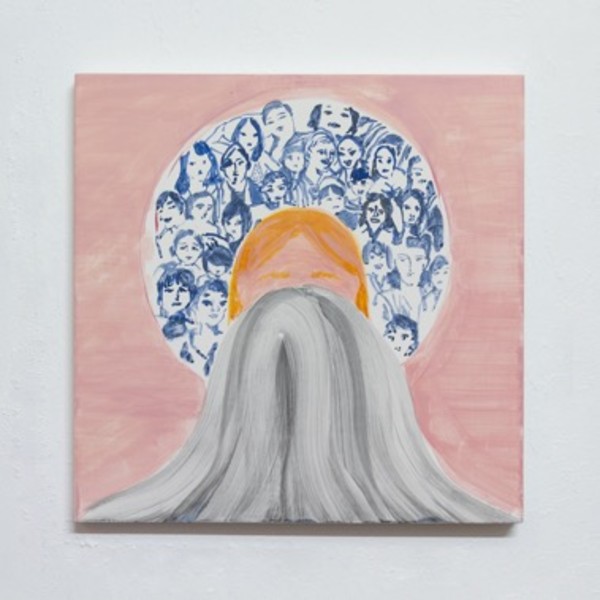 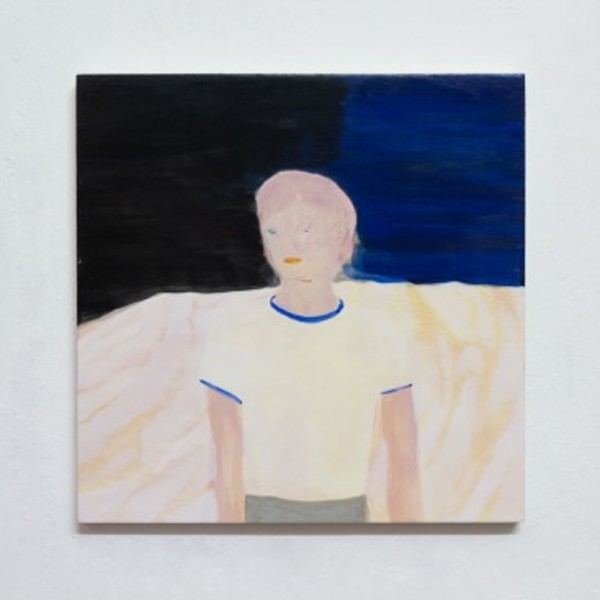 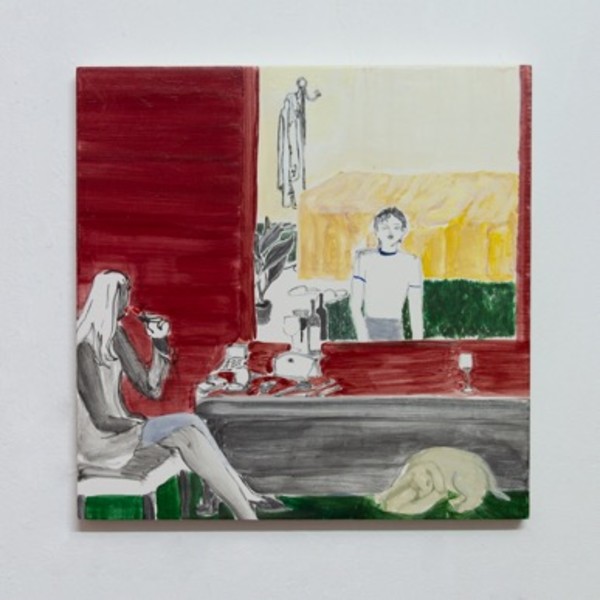 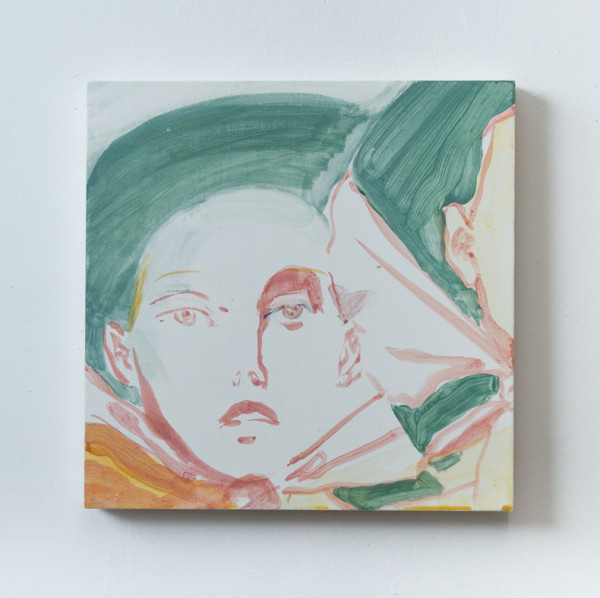 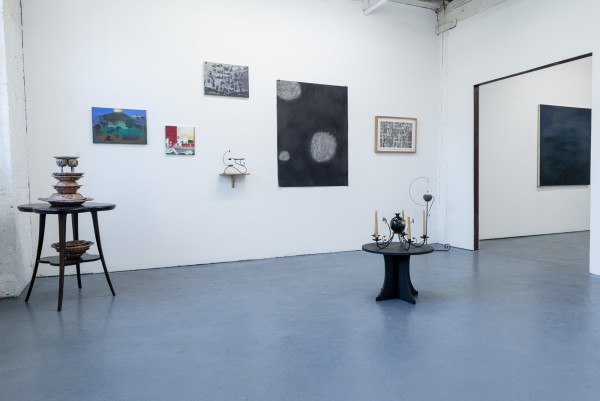 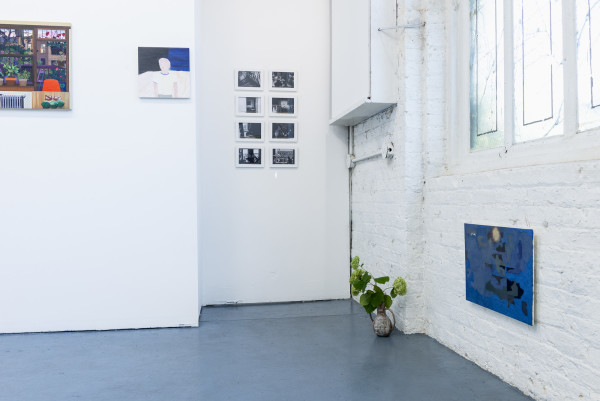