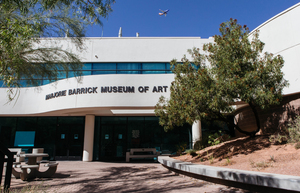 Some Research on Juan Quezada Celado 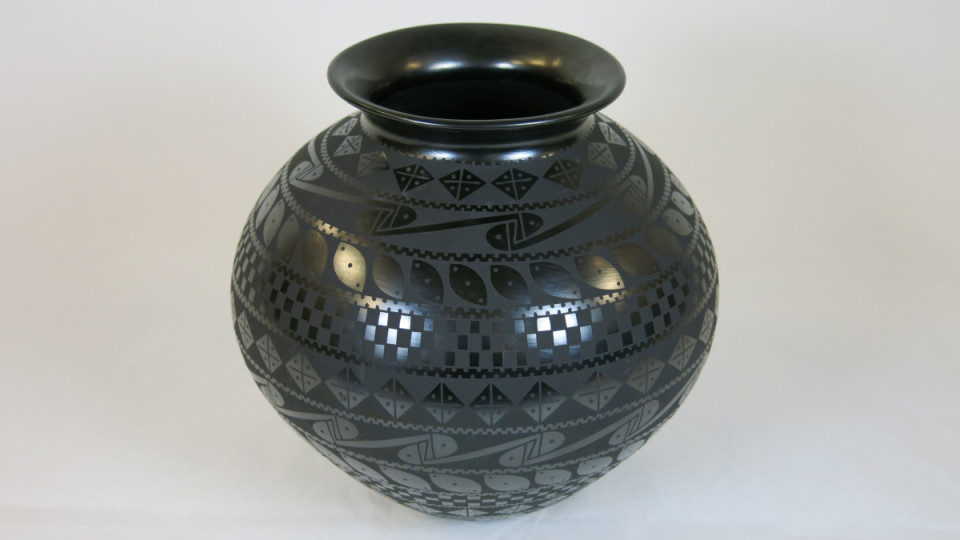 This summer we decided to draw attention to the similarities between two of our black ware pots by curating a small exhibition in the window of the Braunstein Library. We wanted to point out that both of the potters — Jaime Quezada and Maria Martinez — had rooted their practices in discoveries that came from a close observation of potsherds left behind by ancient American cultures. When our volunteer Michael Freborg began to look into the life of Quezada he quickly learnt about the pioneering work carried out by the artist’s uncle, Juan Quezada Celado, and chose to research him further. This is what he wrote.

Juan Quezada Celado is known as the founding father of Mata Ortiz pottery. He was born to Jose and Paulita Quezada on May 6, 1940 in Santa Bárbara de Tutuaca, a town in the Belisario Domínguez Municipality. His father was a rancher in Tutuaca who herded cattle and raised horses. His mother moved from San Lorenzo to Tutuaca to work in a kitchen. After a brief courtship, his parents married and had ten children. Quezada’s family moved to Mata Ortiz, a poor town in Chihuahua, when he was just an infant. Quezada learned to be a cowboy like his father. In 1964, he married Guillermina Olivas Reyes, who came from a farming community called Namiquipa, a municipality that gained its fame from the chronicles of Pancho Villa. He and “Guille” have eight children, all of whom make Mata Ortiz-style pottery. Quezada has been featured in numerous books, magazines, and scholarly essays. He has frequent exhibits in New Mexico, Arizona, and California. His works are also displayed in museums throughout Europe and Japan.

Quezada began painting and sculpting at age seven. He ground rocks, plants, egg yolks, and even grasshoppers into natural paints. He drew and painted on paper, wood, and on the walls in his home. He went to school for only three years. At age 12, he dropped out to work because his family needed the income. He was a boxer as a teenager, managed by his family friend, Pino “Pinito” Molina. He claims to have never lost a fight. But he retired after a short career because his mother was so worried. He was a farmer and railroad worker from age 12 to 14. During that time, he searched for firewood, agave shoots, wild honey, and rattlesnakes (for meat) near the ancient ruins of Paquime, nestled in the mountains surrounding his village. Among the ruins, he discovered ancient pottery shards made by people from the Casas Grandes culture, a civilization that flourished from the twelfth century to the fifteenth century. Their pottery usually has a reddish surface, decorated by red, blue, black, or brown colors.

After studying the shards that he had found in the mountains, and experimenting with his own pottery-making, Quezada finally learned how to replicate them. He had no instructions for making the pots, but his determination finally paid off. He made his first successful piece of pottery in 1971, the same year in which his second son, Juan Jr., was born. “It took him years of trial and error, but finally Juan Quezada taught himself to make a good copy of the ancient Indian designs,” says Macarena Hernández of Frontline/World PBS. In 2005, Hernández traveled deep into the arid Chihuahuan desert to film a documentary on the man who used his unique pottery-making talent to bring prosperity to the struggling village of Mata Ortiz. She was able to spend much time with Quezada and the other potters. She describes Quezada as “like a character out of a Mexican fable and someone who is deeply connected to the land.” Quezada has considerable knowledge about the natural resources surrounding his community, particularly about where to locate the clay and minerals needed for making and designing the pottery.

The Mata Ortiz potters dig up red, gray, and very rare white clay in the hills near their village. The clay is purified over several days using filters and basins. Sand is used to keep the clay from cracking. After the pots are made, they are fired outdoors using dried cow chips. Quezada uses his own special technique called the “single-coil method.” He starts by pressing a large clay doughnut on top of a clay tortilla. Then he pinches the fat coil of clay to form the pot and uses a saw blade to smooth its surface. To produce the colorful reds and deep blacks on his work, he uses iron oxide and manganese deposits found in the countryside. After he paints intricate designs using a tiny paintbrush made of human hair, he buffs the pot with bone fragments. “Every pot speaks to me differently,” Quezada says. He makes a variety of different containers. Some are low, open bowls called cazuelas. Other bowls, called cajetes, are taller. He also makes tall, narrow percussion instruments called cantaros. Today, his pots sell as high as $10,000, with the average piece selling for $3,500.

Quezada has always focused on quality rather than quantity, a principle he has instilled in all Mata Ortiz potters. From early on, he wanted his whole village to share in his success, so he taught the craft to his family, friends, and neighbors. “I remembered a proverb my mother used to say: ‘You don’t give a fish to the needy; you teach them how to fish,’” he says. His youngest sister, Lydia Quezada, was his first and most talented student. She and her husband, Rito Talavera, and their two children, Moroni and Pabla Talavera Quezada, are all experts in the Mata Ortiz style. His other siblings, Reynalda, Consolación, Genoveva, Jesús, Nicholas, Reynaldo, and Rosa are all talented artists who make pots similar to those found in Paquime. His brother Nicholas Quezada is considered one of the top four potters of Mata Ortiz. His polychrome ollas, or ceramic jars, with their geometric designs, sell for as much as $2,500 each. His nephew, Damian Quezada, another top artist in the family, also makes highly artistic polychrome jars. And his other nephew, Jaime Quezada, makes some of the most exquisitely detailed black-on-black pots in Mata Ortiz. Today, over 300 families in Mata Ortiz earn their income from making pottery.

Marketing the pots was extremely challenging for Quezada at first. In the beginning, he and other potters in his village made works that they traded at the border for used clothing and other goods. But Quezada’s luck changed when he met Spencer Heath MacCallum, an anthropologist and art collector who discovered three of his ceramic pots in a New Mexico junk store called Bob’s Swap Shop in 1976. MacCallum was impressed by their perfect symmetry and intricate red- and black-painted geometric designs. “Those pots seemed to have a life of their own, MacCallum recalls. “It’s as if they stood up and shouted, ‘Look at us, we were made by someone who knows who he is.’” Unable to get the pottery out of his mind, MacCallum went searching for the mysterious artist who made the works. He followed his leads to Chihuahua, where he literally went from door to door, from settlement to settlement, showing photographs of the pots to any random stranger he could find. He eventually found Quezada at his village of Mata Ortiz. Quezada was suspicious at first, hardly believing that anyone would show interest in his artwork. But MacCallum convinced him to make more pots and he travelled back to Mata Ortiz on several more occasions. He encouraged Quezada to continue honing his craft and gave him a stipend. With the extra income, Quezada was able to take the time he needed to perfect his form and designs. Over an eight-year period, MacCallum helped him to develop business contacts and to show his wares to gallery owners and museum curators. In 1979 and 1980, Quezada was able to showcase his works in prominent galleries in California, Arizona, and New Mexico. His pottery was exhibited under the name of Juan Quezada and the New Tradition. This established Quezada’s pottery as part of a legitimate art movement.

Another influential figure in the marketing of Mata Ortiz art is consultant and pottery collector Walt Parks. Since 1984, Parks has been Quezada’s most dedicated promoter. In the last 30 years, he has made over 50 trips to Quezada’s village, helping to bring his work to the American market. Parks was instrumental in organizing sales and exhibitions during the 1990s and early 2000s. Today, he continues to write and teach about Mata Ortiz pottery. Quezada also

enlisted the help of his close friend and former boxing manager, Molina, who read over complex legal contracts with Mata Ortiz potters to ensure that they were not being taken advantage of.

Mata Ortiz pottery has been exhibited throughout North and South America. From 1999 to 2001, there were 16 major museum exhibitions in Mexico and the United States featuring the works of Quezada and other Mata Ortiz potters. Quezada’s pottery was exhibited at the Franz Mayer Museum in Mexico City in 1999. In 2001, his art was showcased at the San Diego Museum of Man and the New Mexico Museum of Fine Arts in Santa Fe. His work was featured at the American Ceramic Museum of Art in 2007. Quezada’s pottery, along with the works of other Mata Ortiz potters, and some ancient pots from Casas Grande, can be seen at the Amerind Foundation Museum in Dragoon, located about 60 miles east of Tucson in Arizona. In 2016, the work of Lydia Quezada, her son Moroni, and her daughter Pabla, was displayed at Quail Creek’s Kino Conference Center. Galleria de Ollas in Puerto Vallarta exclusively features Mata Ortiz pottery. The gallery now displays works from the second and third generations of the Quezada family, who incorporate their own styles of pottery-making while retaining the methods used by Juan Quezada.

Mata Ortiz pottery is owned by collectors from around the world, including the Pope, First Lady Laura Bush, Supreme Court Justice Sandra Day O’Connor, Walt and Betty Parks, and numerous Mexican dignitaries. The pottery can be bought for as little as $5, but some of the more expensive pieces sell for hundreds and even thousands of dollars. Quezada and the Mata Ortiz potters have been featured in several books, including Juan Quezada and the New Tradition (1979), The Story of Casas Grandes Pottery (1991), The Many Faces of Mata Ortiz (1999), Juan Quezada (2003), The Pot that Juan Built (2011), The Miracle of Mata Ortiz: Juan Quezada and the Potters of Northern Chihuahua ( 2012), and Mata Ortiz Pottery Buyer’s Guide (2016). Quezada has also won prestigious awards. In 1998, he received a plaque from the state of Chihuahua. In 1999, he received the Premio de Nacional de los Artez, the highest honor that Mexico gives to living artists.

Quezada and his wife, Guille, live at Rancho Barro Blanco, named in honor of the pottery, on a rocky bank of the Palanganas River. The ranch overlooks his old village of Mata Ortiz only a few miles away. Quezada is usually seen wearing a cowboy hat and boots and has a pet javelina named Javier. He prefers the solitude of the wilderness to interacting with family and friends, but he is a gracious host to all who visit. Every household in Mata Ortiz now practices pottery-making. Each potter has their own style, but they all keep true to Quezada’s vision.  The people in the area still sing songs to honor the man who saved their village from economic ruin. Mata Ortiz is now a thriving community of more than 500 artists making high quality pottery.

Image: untitled black ware vessel by Jaime Quezada, photographed by the Barrick staff. This work was donated to the Barrick Collection in honor of Randy Plumley.

Read more from UNLV Marjorie Barrick Museum of Art
Cookies help us deliver our services. By using our services, you agree to our use of cookies. Learn more