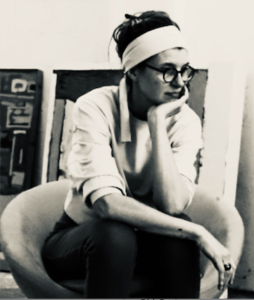 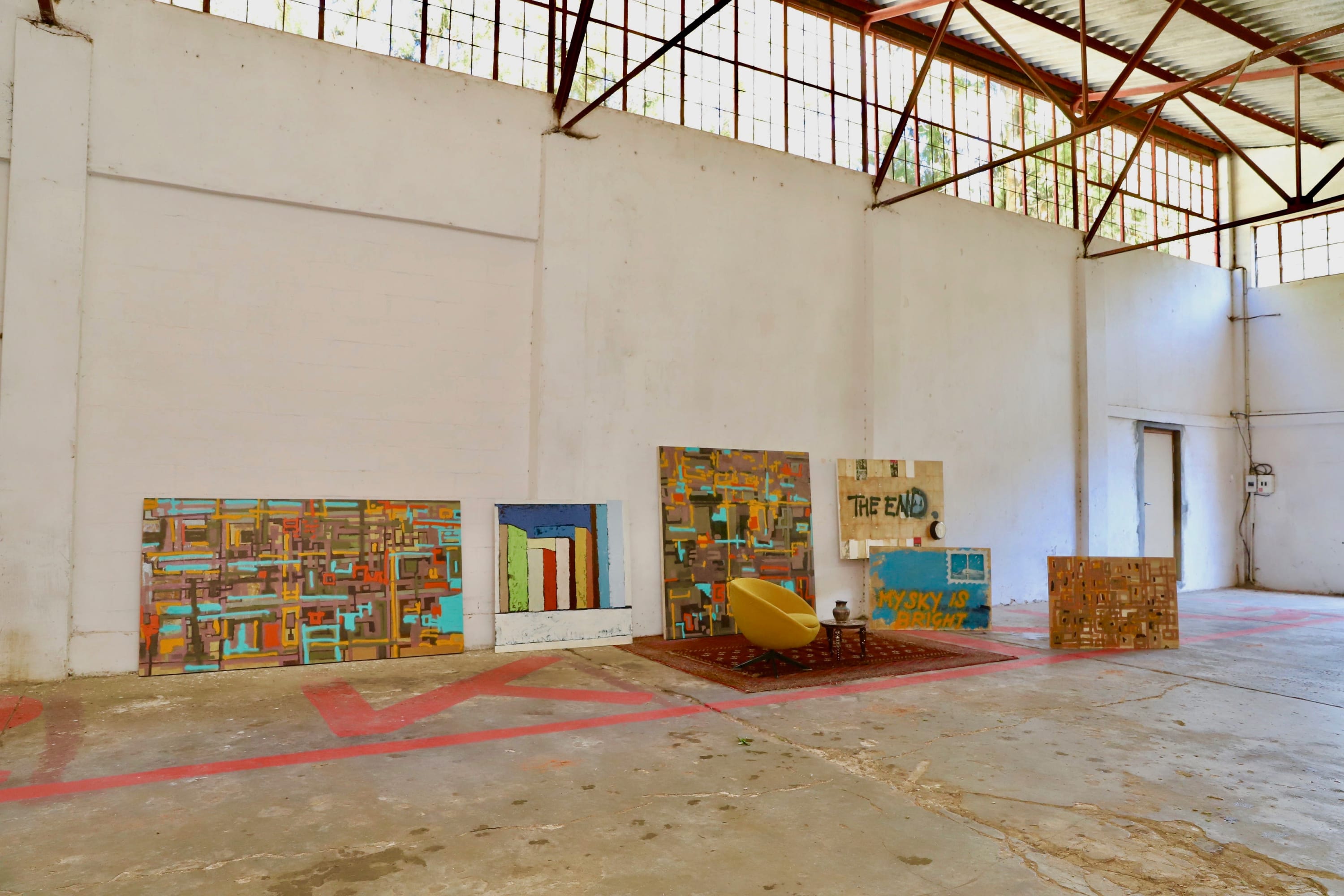 South African born artist, Sylvia Rossouw, is a multi-disciplinary professional, with a B.A. Fine Arts degree from Michalis School of Fine Art (University of Cape Town, South Africa), where she majored in painting.

Her passion and inspirations extends beyond the contemporary world. The ancient world, with its structure, ritual, sanctuary and wisdom informs her artistic processes. She is emotionally drawn to the ruin, the relic, the abandoned and the sacred, as a means to connect with herself, which informs the visual language. Her work often refers to the discourse of longing and belonging.

Sylvia's work includes a wide variety of medium, which often incorporates found materials, found objects, oil paint and spray paint. The bodies of work are referred to as "paintings", as they are constructed from a two dimensional, painterly view point, even if it includes three dimensional elements.

Her creative practices as Principle Architect and Artist tends to feed each other. The composition of the paintings are often reminiscent of the built environment in its use of architectural proportions and layering. "Free play" provides a realm beyond the physical experience, which creates an imaginary space to shift the narrative.

"Slow" processes such as oil painting and hand stitching is counteracted with "fast' processes, such as assemblage and spray paint. The juxtaposition of these two processes create a visual tension, which shifts time and place into a space of uncertainty.

Her work are included in private collections, both locally and abroad.

The Limited Edition of the Biennale Internazionale Dell’ Etruria at Villa Rinchiostra in MASSA, Italy, during September 2021,

Aldila’, at M.A.D.S.Gallery, Milan and Fuerteventura, during October 2021,

“Hysteria” is a state of mind that I’ve had to face, all my life. The external world, with all its stimuli, becomes unbearable at times. The resultant effect is extreme highs, followed by spells of extreme lows.

The fear of loss of control leads to anxiety. Repetitive compulsive behavior becomes a means to have some form of control, over the uncontrol-able. Numerology becomes navigators in my daily life. They pop up on the alarm clock, in the middle of the night; on the thermometer of the solar geyser; on the washing machine cycles; watchful, guarding angels, each with a specific spiritual meaning.

My internal world has always been my safe haven, a place to withdraw to, a place of reflection and contemplation. This is also where my creative practice finds its home.

The internal search often leads me to literature, the writing of prose and letters, which I seldom send, the written form of lyrics of songs that I love, ancient history found in old book shops, images of artefacts and the process of salvaging found materials.

This body of work explores my own journey on one level and echoes the collective need of something to hold onto, in a time of global change.

At the beginning of the year, I came to the rather shocking discovery that I have moved thirty-eight times in thirty-one years. What does it mean? This body of work is an investigation and discourse, on a narrative, that unfolds in the making process.

The ancient world, with its structure, ritual, sanctuary and internal wisdom is the intuitive visual  starting point for the body of work I am emotionally drawn to the ruin, the relic, the abandoned, the sacred as means to connect with my own inner truth.

Found, ancient artefact prints, paperback romances in foreign languages, , famous opera dialogue and movie stills of bygone days, are explored in a state of play. The emotion experienced in the archive and fictional interweaves and informs the personal narrative, as it is performed and unfolds in the present..

"Free play" provides a realm beyond the physical experience, which creates an imaginary space to shift the narrative.

What is present, what is remembered, what is forgotten and what is omitted, opens a dialogue in the narrative.

The investigation is explored in the making. Layer upon layer is  interwoven to form a map of found, personal, collective and connected experiences, where personal truth is revealed.

“Slow" processes, such as oil paint and linseed oil, is counteracted with "fast' processes, such as assemblage, varnish and spray paint. The juxtaposition of these two processes create a visual tension, which shifts time and place into a space of uncertainty.

Artists statement for the body of work entitled, SACRIFICE, 2021. Art curator, Lisa Galletti’s curatorial vision of SACRIFICE at M.A.D.S Gallery, Milan and Fuerteventura, December 2021, asks “Why do we create?” The body of work explores the question in the art making process.

Driven by the need to start afresh, I followed the railway line in search of “home”. Elandsvlei, the Rossouw family farm, outside Piketberg, becomes the first site. Basic needs for shelter and privacy are met using found materials to create a tent. The ruins of my grandmother’s former chicken coop became a studio, whilst the attic is a place of wonder. The archive is explored in a state of play, where the past is performed in the present. What is present and what is omitted in the attic opens a dialogue in terms of the family’s history.

The main focus is on my love for the land, as a safe haven, which I return to often. The landscape becomes a sanctuary for being, beyond the constraints of time and a place to connect to the universe on a sensory level.

In a place where very little is discarded, the found object has a story to tell. The process was developed on site, using found materials and selected based on daily needs. All materials are used in their found state. Openings are made within clearly defined borders and juxtaposition is used as the preferred means to change the function of objects and shift meaning.

Matjiesfontein, a living museum, a place of mystery, becomes the second site. The performance of  "A Nice Day for a White Wedding" takes the form of a pilgrimage along the railway line. The “tent”, from the first site, becomes a “wedding dress” in the second site. The idea of “home” shifts from an external shelter to an internal safe haven.

The 1500 + performance photographs and on site videos remained untouched for seven years. When the opportunity for SACRIFICE came along, I KNEW this was the work that had to be completed.I collaborated with drum and base musician and video editor, Justin Scholtemeyer (COUNTERSTRIKA) to shift the narrative into 2021. The music composition completes the work and shifts it into a collective narrative.

The work becomes exactly that, a SACRIFICE, an offering; that what we endure, as humans, as artists and release in the process of art making. The outcome is a celebration of life and what it means to be HUMAN, on a collective level.