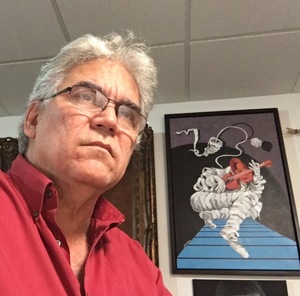 Sergio Portillo is a Venezuelan-American painter, sculptor, illustrator, and founder of the Neo-sculpaintism art movement -- a contemporary approach to blending painting and sculpture. Click here to see Neo-sculpaintism prototypes. He is best known for his versatile artistic styles which range from realism to abstract.

Sergio was born in Venezuela in 1955 and grew up in South America where he pursued his lifelong passion as an artist. After moving to the United States, his work earned him recognition as a multimedia artist, painter, sculptor, and illustrator.

In journalism, Sergio received a variety of Associated Press awards in digital media as an illustrator for The New York Times Regional Newspaper group.

Besides painting, he has worked in sculpture, drawing, and printmaking. He has worked on several architectural projects. Some of the most recent high-profile works in this realm include the New Gaillard Performing Art Center, in Charleston, South Carolina.

He was the publisher of the bilingual publication Panorama Hispano and writer of the Spanish magazine Hello World (Hola Mundo.)