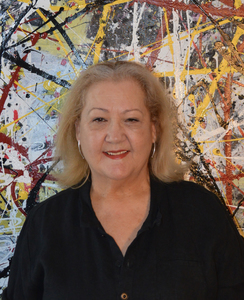 My intention when I paint is to capture an illuminated moment in my life which inspires me to materialize that vision through the alchemy of painting.

Born in Havana, Cuba, in 1943, Lia Galletti is a painter and printmaker, known for her abstract expressionist work. She left the island with her family at the age of 17 and moved to New York, where she finished her education and started to paint and exhibit her work in New York’s Greenwich Village and other venues on the east coast. Her father, also an artist, influenced her path towards becoming an artist as she watched him paint as through their life. Lia has been painting ever since, developing her individual style and technique. She studied printmaking within the disciplines of etching, drypoint, linocut, silkscreen and monoprint. Lia exhibited her work and received an award at The Boston Printmakers, Brockton Art Museum, Boston, MA (1988). Her work is in their collection, as well as in the Instituto de Cultura Puertorriqueña, where she participated at the Ibero American Printmaking Biennial of San Juan, Puerto Rico. She recently participated in the Tokyo International Mini Print Triennial at Tama Art University Museum, Tokyo, Japan and the 4th Geoje International Art Festival, Haegeumgang Art Museum in South Korea.

Lia has had solo exhibitions in Washington, DC; Orisha, Kingston, Jamaica and in Florida at Art Miami and Art Americas in Miami, Interstices at the Capitol Complex in Tallahassee and recently at Adelmo Gallery, Miami, Florida. She has participated in collective expositions in the US, including Caribbean Visions: Painting and Sculpture (a traveling exhibition in 1995); Cadaqués, Spain; Ottawa, Canada; and Mexico City (VI

Bienal Iberoamericana de Arte Pedro Domecq). She participated in the Art In Embassies program in 1995 at the American Embassy in Kingston, Jamaica. Lia has received several awards, including State of Florida Individual Artist Fellowship HM Visual Arts/Painting (2000). Her work is in several private and public collections, including Bacardi International and The Art Museum of the Americas at the Organization of American States, Washington, DC. Her work has sold at Sotheby’s New York. Lia Galletti currently lives in Miami, Florida, where she has her studio.

For the last 30 years my work has been abstract. I have developed my work intuitively and organically through endless experimentation with mediums and techniques that have coincided at this time with my actual expression. These 10 paintings represent my work of 2019 so far, in which I have created over fifty large format paintings. Color appears as the communicator in some of them and in others it takes a back seat, giving prominence to monochromatic expression as the backbone. The paintings are mainly large formats, which allow me to move around and freely carry my actions to the canvas. In my future I have plans for two bodies of work: MONUMENTAL and ELEMENTAL. At present I paint daily in my studio.