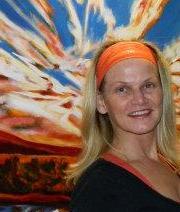 Excited by energy and ideas, Kathleen has developed a mixed media, multidisciplinary approach to her artworks, installations and live productions. 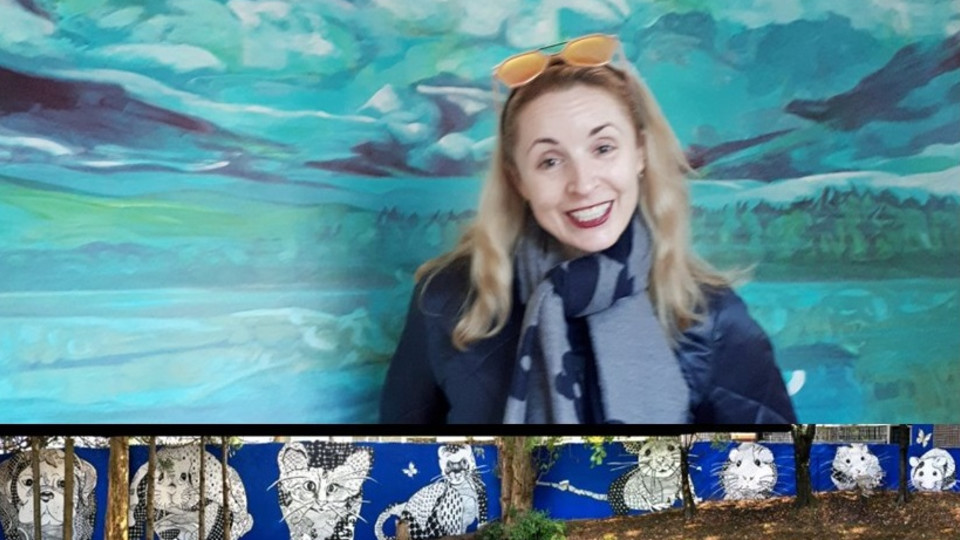 A fresh energetic creative spirit visited my studio in the beautiful form of multitalented Angela Gooliaff. Angela was born in Star City, Saskatchewan, Canada. She is an accomplished Canadian artist; actor for commercials, film and Television and for voiceover animation. An academic with a Bachelor’s Degree in Science with Honours, a major in Biology and a minor in Psychology, Angela formerly worked at the Toxicology Centre of the University of Saskatchewan. She relocated to Vancouver BC., to study Art and Design at Emily Carr University. Angela’s specialty is illustration for children’s story books or giant wall murals. She is pictured in front of my landscape painting titled Rejoice!

Angela has completed seven large murals, some vinyl, some painted directly on walls. After a 2017 mural residency Graniti Murales in Sicily, Italy, Angela wanted to paint a permanent mural in the city where she lives. She sought out a new mural project for Vancouver, BC., through the Mural Support Program for artists, where the city assists with the costs of the paint and supplies for painting walls that are at high risk of graffiti. The artist wage is then supplied by the building owner. However, she had to find her own wall and after six months of trying hard to source a wall with no response, she approached Nadja Pasic, co-founder of the Real Estate Social Club to help her find a suitable wall. Angela says that she “felt like there was a good chance that this group could have leads since they work with many building owners.” The Real Estate Social Club reached out to its members and successfully secured the artist a 1,200 square foot wall space. Angela completed the public mural titled Giant Pets located close to the BC SPCA in Vancouver, uplifting the aesthetics of the city. When the Real Estate Social Club informed Angela of the success of locating a wall for her, she exclaimed that she “was on cloud nine! It was the best feeling! I couldn’t wait to meet the building owner to begin discussing the mural itself. Upon arrival at the wall I felt intimidated! It was 120-feet long and ranged in height from 6 feet to 12 feet. This was the biggest wall I had ever painted!!! I was also thrilled for Nadja and the Real Estate Social Club. I felt like this was a big accomplishment for them. Everyone seemed really motivated to help with finding me a wall, so the teamwork really paid off – a feather in their cap. I am so grateful for them and I thank Molly Lowe and all the building owners who trusted in my vision for Giant Pets located at 1227 East 7th Avenue. The animal theme celebrates the great work of the neighboring building of the Vancouver SPCA. The stylized pattern on the animals’ bodies references quilting and quilting bees, a social gathering where – typically – women gather for artistic expression. This communal activity of the quilting bee parallels the community effort required to care for our animal friends.”

Collaboration is the key to success and deciding where to live, whether you are renting or buying, working for a company or self-employed, we all want to feel comfortable and be surrounded by beautiful aesthetics inside our spaces and outside in our environments. We all seek community. The RealEstateSocial Club.ca offers community and fun! Nadja invites anyone to become a member: Buyers, Sellers and Business Networkers, and to enjoy having monthly chances to win prizes and attend events throughout the year. She says that, “This is a group for anyone interested in Real Estate Services - the goal is to build a super fun and informative Real Estate Social Club. Where we CONNECT - MENTOR - MOTIVATE and SHARE. If this sounds like you, join us! This platform will provide you with information, tools, sales training, personal development workshops, and access to the experts in various fields.”

A high-octane collaborator, Angela is featured in the new video game called Hello Hero as the voices of characters: Katarina, Icy, Dart Gear, Dorothy and Shu. She has teamed up with her nine-year old niece, Brynna Beaupre, to write and illustrate the children’s book A Fun Food Friends Adventure published by FriesenPress. A first book in a future series of children’s publications.

Angela’s dream is to secure an illustration agent, to continue illustrating for authors, and says that she is “always looking for a new mural to paint anywhere in the world!” As a kindred spirit for extra-large mural and canvas spaces to paint, it was lovely to witness Angela choose to immerse her spirit into the wide-open natural landscape of the Maple Ridge-Pitt Meadows dykes painting, titled Rejoice! - a star has risen, Angela Gooliaff.