Really Cool Art is a growing collection of established and up & coming artist mostly focused on contemporary art with an infusion of some more traditional art. 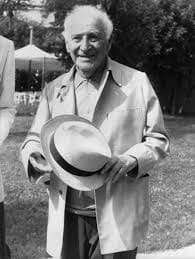 On July 7, 1887 Marc Chagall (Movsha Shagal) was born in the village of Vitebsk, Belorussia. He was the oldest of nine children in a working-class Jewish family. At age 20 he began to study painting, first in Vitebsk, then in St. Petersburg. His distinctive style was already beginning to appear in his early works.

In 1910 he began four years of living in Paris, a city that kept drawing him back for the rest of his life. In Paris, he became acquainted with art movements of the time, including Fauvism and Cubism. He also became acquainted with leading artists of the time, including Braque, Picasso, Delaunay, Leger, and others. Chagall held a very successful, one-man show in Berlin in 1914, as part of an eventual journey home.

At the outbreak of WWI, Chagall returned home to Vitebsk, where he married Bella Rosenfeld. He worked in Vitebsk for several years and became director of the Vitebsk Academy of Arts. He moved to Moscow in 1920 and worked on stage decors and painted panels for the avant-garde Jewish Theatre. After it was made clear he would not have the freedom to develop, given the political realities of Marxist socialism, he left Moscow for Europe in 1923.

After arriving in France, he met French art dealer Ambroise Vollard and started creating etchings for future publications. These were not published until years later due to Vollard’s death and WWII. Chagall’s paintings were shown at galleries in New York as well as Paris, Berlin, and other European cities. He was commissioned by Vollard to produce a series of etchings illustrating the Old Testament version of the Bible. These were also not published until after WWII. During his travels, Chagall fell in love with the Cote d’Azur. Chagall eventually moved away from Paris to a villa near Porte d’Auteuil.

Chagall continued to work in France despite the growing Anti-Semitism of the Nazi movement and the invasion of France by Germany in 1939. He was eventually convinced by his daughter Ida of the urgency to leave France. Marc and Bella first travelled to Marseilles, France and eventually left for the United States in May of 1941. Their daughter Ida joined them a short time later.

Marc Chagall arrived in New York City in June, 1941. In addition to paintings, he worked on theater sets and costumes. His paintings were exhibited in New York, Chicago, and Paris. His wife Bella died suddenly in 1944 due to a viral infection. Marc ceased all work for almost a year. In 1946, after the end of WWII the Metropolitan Museum of Art in New York City held an exhibition showing 40 years of Chagall’s work. He had become very well known. He began making plans to return to France.

Chagall returned to Paris in 1948 and signed Teriade to publish his graphic works. He settled in Vence, in Provence in 1950. In addition to painting, he continued to create graphic works. Many of his earlier etchings and lithographs were finally published in the early 1950’s. His daughter Ida introduced him to Valentine Brodsky, whom he later married. In this period, he expanded the mediums in which he worked to include ceramics, stone sculptures, mosaics, and tapestries.

In 1958, he designed scenery and costumes for the ballet Daphne and Chloe for the Paris Opera. This led to other public commissions in the 1960’s, including stained glass windows for the Hadassah Synagogue near Jerusalem, the United Nations, and several cathedrals in Europe. He designed a new ceiling for the Paris Opera House and panels for the Lincoln Center in New York. He also produced what many consider his best graphic works, the Daphne and Chloe suite of lithographs in 1961.

In 1966, Chagall moved from Vence to St. Paul de Vence (still in Provence). Chagall’s reputation continued to grow. He continued painting, producing graphic works, and producing public commissions. His works were exhibited at the galleries and museums throughout the world, including the Louvre and Petit Palais in Paris. He produced the America Windows for America’s Bicentennial celebration in 1977 in gratitude for America taking his family in during WWII. These windows can be viewed today at the Art Institute of Chicago.

He died March 28, 1985 in St. Paul de Vence, where he was buried. His long, prolific career and distinctive themes and use of color make him one of the acknowledge masters of 20th Century modern art. 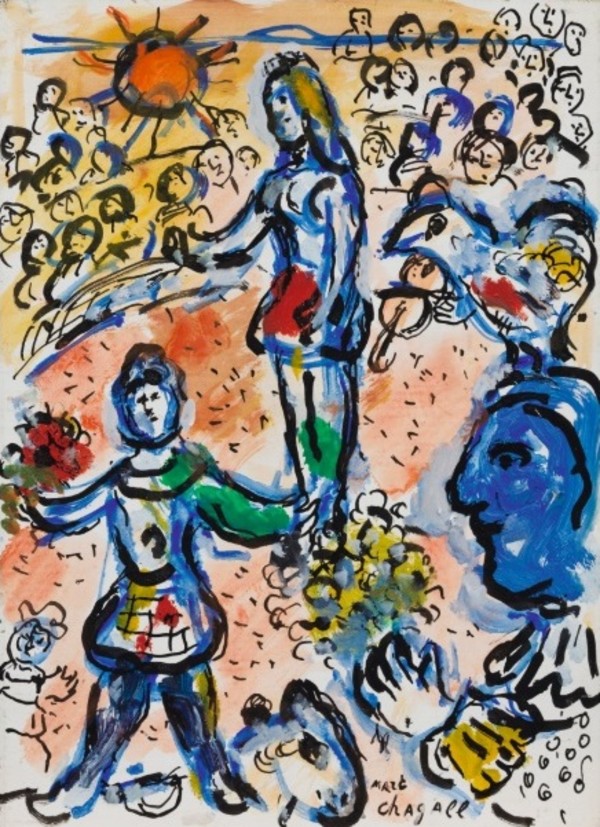 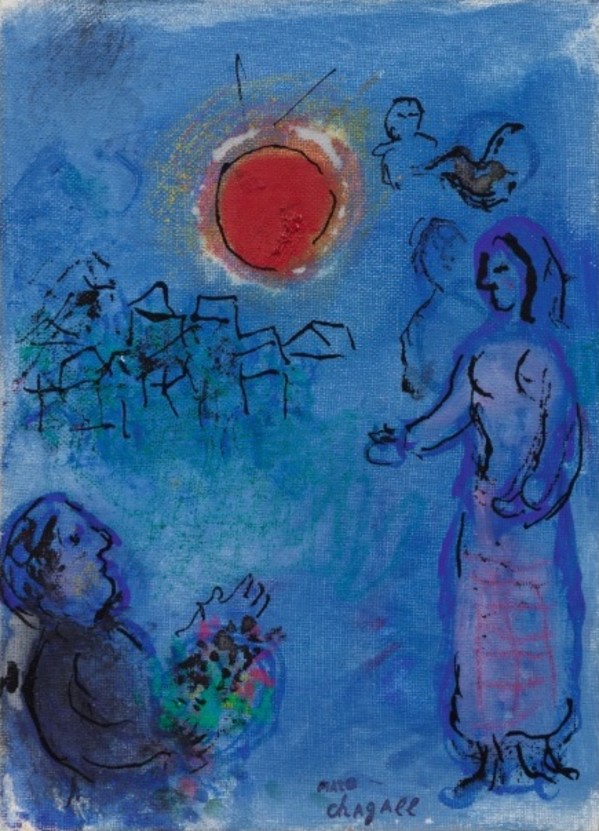 8 x 6 in
Oil, gouache, pen and ink and pastel on canvasboard