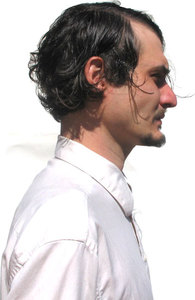 A musician/composer, chief, skilled craftsmen, committed partner, father, and through it all, artist; Jason is from Atlanta, Georgia. He started his art education at Atlanta College of Art. After college Jason relocated to the culturally rich town of Athens, GA. Here he co-founded and performed in many musical groups as well as participated in various art productions within the local art scene. During this time he was employed at a popular vegetarian restaurant and worked his way up from line cook to become one of two top chefs, where he developed original vegetarian recipes.

While cooking, Jason discovered that art is not just painted on a canvas but that art transpires to all aspects of being human. Jason became serious about painting in 2006, when he completed his sold- out series "1951 Office Wall Hangings" and the series "Deeper into Color" as well as other works.

Returning to Atlanta in 2010 Jason settled into a studio in the art district of Castleberry Hill where he produced and sold his artwork. During this time Jason developed a ridged endurance and a keen eye for detail while working days as a licensed plumber. With his experience as a skilled craftsman, you can see a construction-like quality that has developed into his work.

In 2016, with his inspirational partner Nell and son Hawthorne, he moved to Midcoast Maine where he resides today. Here in Maine, he has been involved in the local art community as an art teacher in Rockland and opened his studio to the public for the Belfast Art Walk during summer 2017. His latest work includes the "Abstracts in Maine" series, the "Element" series, "The Artwork Consigned to Oblivion Project” and “Constructions” series.

Consciousness, time, energy, matter, and space are the components of the art. Through my awareness and my senses I describe what I experience onto the canvas, mostly with paint. I borrow from geometry as I find it to be the natural language of the universe. Each work is an exploratory trek into the unknown and I am always anticipating the discovery of what awaits me as I return.