Addressing trauma and uncertainty, this work and the process to create it are a physical representation of the internal struggle to leave what is known, face fear and uncertainty, walk into uncharted territory with no sense of the outcome, and see what can be found there.

About the Artist: Renee Kelly x

My father is a Vietnam Veteran who was drafted at nineteen and served in the Vietnam War in 1967-68. He was in the US Army 196th LIB, and fought in the Tet Offensive and the Battle of Duc Pho among others. He has never really talked much to anyone outside the VA about the war, so my information on his service is limited.

I was born in SF in 1974 and grew up in a nice suburb around other non-military civilians who never spoke of the war, and at a time when there was little to no understanding of PTSD. Like most Vietnam Vets and families of Vietnam Vets at the time, my father and my family were left to figure things out alone and on our own, which really meant the abnormal was made normal and life went on.
My creative work began years ago as a stab in the dark at revealing the unseen and ignored truth of my childhood, while also revealing something inside me that wasn't quite understandable at the time. I now know this misunderstood something by its true name, intergenerational trauma. My creative intent was always for awareness. If I made the work, perhaps there were others like me who might see it, somehow understand, and not feel so alone.

A year and a half ago, even beyond the pandemic, I was in an adverse situation which was a clear result of the effects of my past trauma. Due to this situation I found I could not make my art the way I used to. Much of my prior work was well thought out and carefully planned drawings or paintings with figures where I completely controlled the outcome. In order to continue making art, I decided that, much like life at the time, what I needed to do to move forward was let go of what I knew, and face the uncertain outcome.
This current work is a physical representation of the internal struggle to leave unhealthy familiarity, face fear and uncertainty, walk into uncharted territory with no sense of the outcome, and see what can be found there.

The unfamiliar and unpredictable process of painting the canvas background, putting pieces on, painting around them, pulling pieces off, then fitting them back on in a way that hopefully forms a cohesive whole is reminiscent of the hope that, though it may not be visible initially, maybe something positive can be achieved by walking into the unknown.

In addition to my art practice, I also own a small social emotional wellness and expressive arts company which helps enhance family and friend connections. 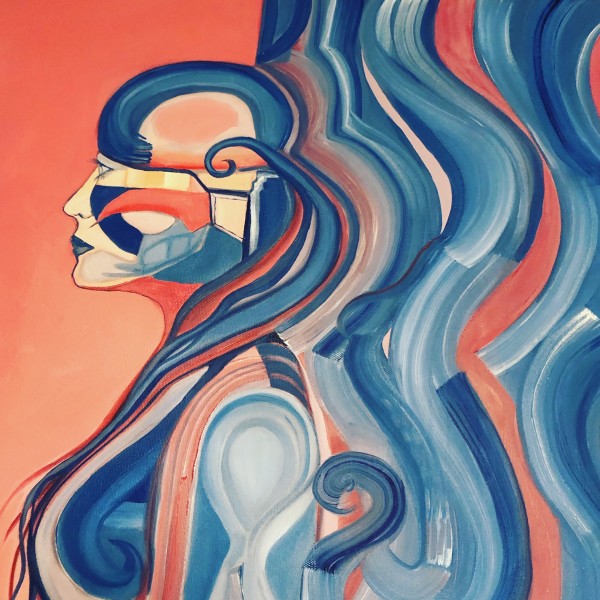