The Portrait Painting Gallery in Barga, is an initiative of artist André Romijn.

Edgar Bundy was a British painter who was born in 1862.

Bundy had no formal training but learned some of his craft at the studio of Alfred Stevens. Bundy specialised in historical paintings in oil and watercolour, usually in a very detailed and narrative style, a genre which was very popular in the Edwardian time Bundy lived in. He exhibited at the Royal Academy in 1915 and at the Paris Salon in 1907. In the Tate Gallery is his Royal Academy painting of 1905 entitled The Morning of Sedgemoor depicting the Duke of Monmouth's rebels resting in a barn before the battle.

Influences in Bundy's work include Pre-Raphaelites such as John Millais, William Morris and the works of John Ruskin.

Edgar Bundy's work has been offered at auction multiple times, with realized prices ranging to 44,959 USD, depending on the size and medium of the artwork. Since 1998 the record price for this artist at auction is 44,959 USD for The Doctor Forbids, sold at Christie's London in 2000. 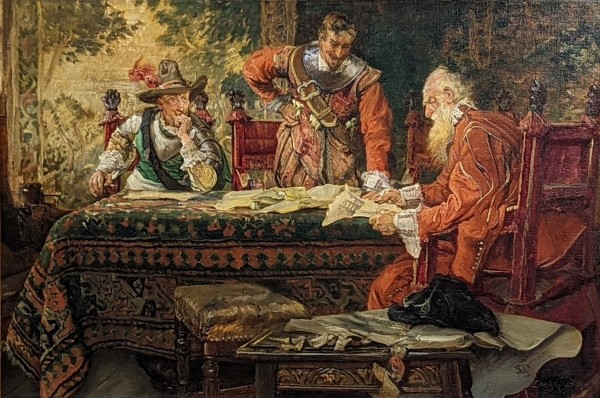 The Portrait Painting Gallery is an initiative of André Romijn